A new frontier is becoming a center of great power rivalry.

It is the Arctic, believed to have vast untapped natural resources and increasingly is at the center of disputes between the United States, Russia, Canada, Norway and Denmark in recent years, as rising temperatures lead to a reduction in sea ice, opening up access to lucrative offshore oil and gas deposits. 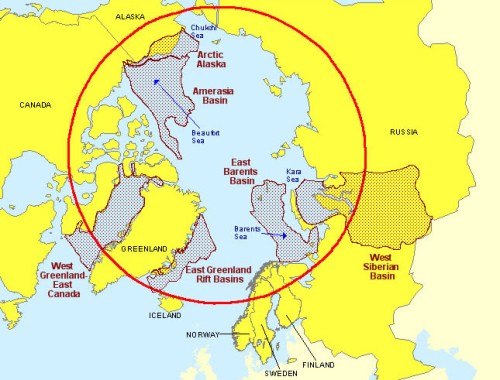 Ed Adamczyk reports for UPI, Oct. 21, 2014, that Russia has begun a large-scale militarization of the Arctic Ocean region, after recent discoveries of oil and natural gas reserves under the ocean floor, as well as the possibility that a potential Northern Sea Route — an alternative to the Suez Canal — could soon be established as global climate change causes melting of Arctic ice.

The Russian news agency RIA reports that Russia is planning to build a military command structure in the Arctic by 2017. Former Soviet bases are being reactivated; a 6,000-soldier permanent military force will be established in northwest Russia’s Murmansk region, with radar and guidance systems.

Col. Oleg Salyukov said, “For the defense of national interests in the Arctic, a multiservice task force will be formed. A motorized rifle arctic brigade is now being formed in the Murmansk region. The second arctic brigade will be formed in 2016 and will be stationed in the Yamal-Nenets autonomous region,” a reference to the Arctic Circle area east of the Ural Mountains.”

Russian marines and paratroopers have already passed survival tests in the Arctic Circle. A month ago during Russia’s “Vostok 2014″ military exercises in the Far East — the biggest ever post-Soviet drills — combat missions in the Arctic were simulated, including a landing on Vrangel Island in the Arctic, the first of its kind in the area.

100,000 servicemen, up to 1,500 tanks, 120 aircraft, 5,000 pieces of weaponry, military and special hardware, and up to 70 ships took part in the exercises. Virtually the whole Russian Pacific Fleet was out at sea performing various tasks: protection of the coastline from seaborne assault, anti-submarine and anti-sabotage training, as well as mine-laying operations.

While the oil and gas reserves in Arctic are claimed by some to represent 17% to 30% of the world’s total, some are skeptical of Russia’s plans. Military analyst Alexander Golts of the Russian news website Yezhenedelny Zhurnal said, “It is consistent with the stance of the Russian state, which only understands the word ‘force’ in military terms. But you must keep it in proportion; it is still only a symbolic battle. Take a look at the map and you will soon see that 6,000 men spread over such a huge area is not much.”

The Arctic area is governed by international maritime treaties. Canada, which also has extensive territory in the region, routinely conducts military exercises there.

Nearly two months ago on Aug. 29, 2014, as reported by Reuters, President Vladimir Putin had already signaled Russia’s military and economic plans for the Arctic. He told a youth camp outside Moscow that Russia must strengthen its position, economically and militarily, in the resource rich Arctic region, where other countries are vying for influence: “Our interests are concentrated in theArctic. And of course we should pay more attention to issues of development of the Arctic and the strengthening of our position (there).”

Back in December 2013, as reported by RIA Novosti (via Global Security), Russia’s Ulan-Ude aircraft manufacturing plant said it was developing a variant of the famed Mi-8 transport helicopter for use by the military in harsh Arctic climate.

Sergei Solomin, the plant’s chief engineer, said the modified Mi-8 will feature a more powerful engine, an auxiliary electric generator, an ice-protection system and ski landing gear for landing on soft snow and swamps. The helicopter’s heating system will be based on technologies used on spacecraft.

Russia has officially set a goal of deploying a combined arms force by 2020 to protect its political and economic interests in the Arctic, including military, border and coastguard units.

According to the Russian military, two Arctic brigades will be deployed in Russia’s extreme north over the next few years. Russia also plans to return to mothballed Soviet-era Arctic airfields and establish a permanent naval presence along the strategically important Northern Sea Route.

According to the U.S. Energy Information Administration (EIA):

The Arctic holds an estimated 13% (90 billion barrels) of the world’s undiscovered conventional oil resources and 30% of its undiscovered conventional natural gas resources, according to an assessment conducted by the U.S. Geological Survey (USGS). Consideration of these resources as commercially viable is relatively recent despite the size of the Arctic’s resources due to the difficulty and cost in developing Arctic oil and natural gas deposits.

Studies on the economics of onshore oil and natural gas projects in Arctic Alaska estimate costs to develop reserves in the region can be 50-100% more than similar projects undertaken in Texas. […]

Overlapping and disputed claims of economic sovereignty between neighboring jurisdictions also could be an obstacle to developing Arctic resources. The area north of the Arctic Circle is apportioned among eight countries—Canada, Denmark (Greenland), Finland, Iceland, Norway, Russia, Sweden, and the United States. Under current international practice, countries have exclusive rights to seabed resources up to 200 miles beyond their coast, an area called an Exclusive Economic Zone (EEZ). Beyond the EEZ, assessments of “natural prolongation” of the continental shelf may influence countries’ seabed boundaries.