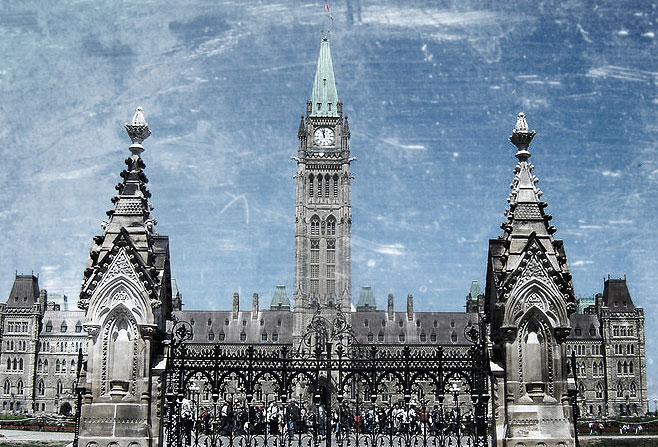 On Wednesday, just two days after a “radicalized” man ran over two Canadian soldiers in a mall parking lot, a gunmen opened fire at Canada’s National War Memorial and at Parliament Hill, killing one soldier and wounding a security guard. He was later killed by an armed guard.

Within less than two days, rhetoric has risen unusually high for Canada in the wake of what have been called “terror attacks,” bringing terrorism home along with fresh demands for new police powers.

This time, the new powers would include ‘preventive arrests,’ potentially taking the country down the slippery slope of guilty-until-proven innocent authoritarian policies.

Public Safety Minister Steven Blaney is giving more indications of how the government intends to strengthen Canada’s security laws in the wake of Wednesday’s attack in Ottawa on Parliament Hill.

The minister told Radio-Canada on Friday that the government is eyeing the thresholds established in Canadian law for the preventive arrests of people thought to be contemplating attacks that may be linked to terrorism. Officials are considering how to make it easier to press charges against so-called lone-wolf attackers.

“The challenges are the thresholds — the thresholds that will allow either preventive arrest, or charges that lead to sentences, or more simple operations,” Blaney said in French. “So what the prime minister has asked is for us to review in accelerated manner the different mechanisms that are offered to police to ensure everyone’s security.”

There is even talk now of ramping up Canada’s hate speech laws.

A bill was already in the works prior to the shootings to strengthen the Canadian Security Intelligence Services’ (CSIS) powers; Prime Minister Stephen Harper had already announced changes including his belief police powers needed to be increased.

“In recent weeks, I’ve been saying that our laws and police powers need to be strengthened in the area of surveillance, detention and arrest,” he said as MPs returned one day after a gunman killed a soldier and made his way into Centre Block on the Parliament Hill. (CBC News)

That makes this shooting very convenient for Harper’s agenda; now in the wake of this week’s shooting, Harper has stated that work will be “expedited”.

Questions already abound as to where suspect Michael Zehaf-Bibeau even got his Winchester 30-30 rifle he used in the shooting. Due to his criminal record, Zehaf-Bibeau was already prohibited from owning a gun; in fact, Canadian courts had already issued the man a standard lifetime gun ban due to a violent conviction. Even without that ban, however, this guy couldn’t have obtained the gun in any legal way.

If anything, first and foremost it just proves that gun control doesn’t work. Regardless, in Canada there is no right by law to bear arms. “Canadians, unlike Americans, do not have a constitutional right to bear arms,” the Canadian Supreme Court ruled in 1993.

As Tony Cartalucci of Land Destroyer Report notes, the same plot had been scripted by the FBI just a month prior:

In mid-September A Rochester man, Mufid A. Elfgeeh, was accused by the FBI of attempting to provide material support to ISIS (undercover FBI agents), attempting to kill US soldiers, and possession of firearms and silencers (provided to him by the FBI). The FBI’s own official press release stated (emphasis added):

According to court records, Elfgeeh attempted to provide material support to ISIS in the form of personnel, namely three individuals, two of whom were cooperating with the FBI. Elfgeeh attempted to assist all three individuals in traveling to Syria to join and fight on behalf of ISIS. Elfgeeh also plotted to shoot and kill members of the United States military who had returned from Iraq. As part of the plan to kill soldiers, Elfgeeh purchased two handguns equipped with firearm silencers and ammunition from a confidential source. The handguns were made inoperable by the FBI before the confidential source gave them to Elfgeeh.

It was warned that only an inoperable firearm stood between Elfgeeh’s arrest and his successful execution of deadly plans hatched by him and his undercover FBI handlers. This script, written by the FBI to entrap Elfgeeh, would be followed almost to the letter in live attacks subsequently carried out in Canada resulting in the death of two Canadian soldiers.

Cartalucci goes on to point out another troubling detail. Like so many other heavily publicized terror attacks, Zehaf-Bibeau was already under both Canadian and U.S. government surveillance prior to the event, with the suspected shooter listed as a “high-risk traveler” who had his passport revoked prior to the shooting:

It is very likely that the recent attacks in Canada involved at least one “informant” working for the FBI. Because the FBI uses confidential informants to handle suspects, if a plot is switched “live,” the informant will be implicated as an accomplice and the FBI’s covert role will remain uncompromised…

With both suspects having been on both US and Canadian watch lists – it is very likely undercover agents were involved in either one or both cases. While many possibilities exist, Western security agencies should be among the first suspects considered as potential collaborators…

Conveniently, both suspects are now dead and little chance remains of ascertaining the truth of who they were in contact with and how they carried out their deadly attacks.

Canada’s domestic terror threat level was quietly elevated just days before by CSIS intelligence, issuing a medium-level ‘could occur’ threat advisory for the first time since 2010. Unlike the often hyped and exaggerated public threat assessments in the U.S., this was an internal determination among the intelligence agencies, and signals likely prior knowledge.

So what did they know and when did they really know it?

Also, as in many highly publicized shootings with government ties, initially police reported multiple shooters. In the end, the story changed, naming Zehaf-Bibeau as the only shooter.

Former public safety minister Stockwell Day told CBC News, “There are always limitations, and this is what we have to realize in a free and democratic society. Any time you increase your security, you decrease your freedom somewhere.” [emphasis added]

Terrorism — monitored and enabled by undercover informants — used as a catalyst to break down civil liberties and accumulate more state power.