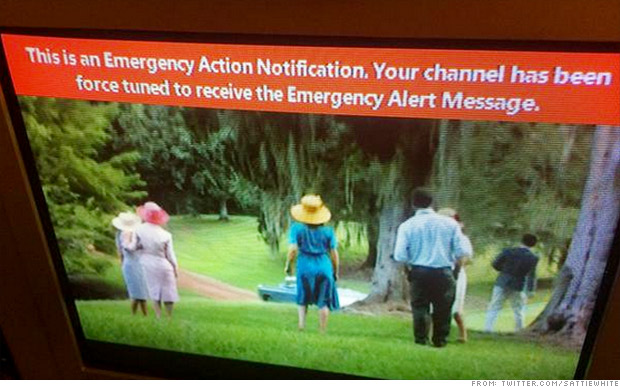 Weird message warns viewers not to use phones amidst Ebola concerns

Americans watching television across the country were puzzled Friday when an alert from the White House interrupted their viewing, told them to stand by for an emergency message and warned them not to use their phones.

The message was seen by viewers in Austin, Atlanta, Detroit and across North Carolina, as well as other areas of the country.

WSOC-TV out of Charlotte, North Carolina later posted a statement on their website saying they would investigate why the message went out, indicating TV and radio stations were given no advance notice of the test.

An AT&T spokesperson later indicated that that the alert notification was sent out erroneously.

“Earlier today, U-verse TV customers may have received an Emergency Alert notification. We confirmed that there is no emergency at this time and we are investigating why this occurred. We apologize for any inconvenience,” read the statement.

However, the Emergency Alert System is mandatory by law – stations have no control or power to block the signal once it is sent out by the federal government. Broadcasters are required to install and maintain FCC-certified EAS decoders and encoders at their control points, meaning the signal cannot be switched off or interrupted.

How sensible is it that the feds ‘mistakenly’ sent out an emergency alert – potentially causing panic – amidst national concerns about the Ebola outbreak in the United States?

Back in 2011, a similar test of the emergency alert system, in this case for cellphones, went awry when residents were told that a “civil emergency” was in progress and that they should “take shelter,” prompting 911 lines to be flooded by panicked callers. Authorities later apologized, claiming the test was a mistake.

Did you see yesterday’s emergency alert message? Let us know what you think in the comments below.

UPDATE: AT&T has blamed a “nationally syndicated radio station” for sending the alert message, despite the fact that only the federal government can send out EAS alerts. The alert system, “can only be activated by the President in times of emergency,” reports Fox 5.