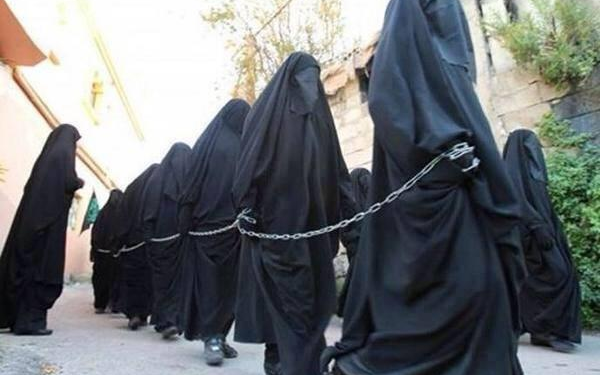 We told you about Christian Marines who have been aiding in the care of the wounded and training members of the Peshmerga (Kurdish fighters) last week. Many of the Yazidi women have been captured by ISIS and have been forced to be sex slaves. However, what is happening to them is more than mere sex, it’s brutality. In fact, it’s so bad for these women, that some are committing suicide rather than hold out for hope of being rescued. One young woman called a friend of hers who is embedded with the Peshmerga to ask that the brothel she is at be bombed.

Recently, a group of British Kurdish activists staged a graphic re-enactment of an Islamic State “sex slave auction” in the middle of London.

The following video was made by the group to demonstrate what is happening to these women every day.

The man in the video with the megaphone, Karam Kruda, spoke to IJReview and explained why they did it. He said:

“I’d just like to say that the idea behind the event was initially from my friend Ari Murad- the videographer. We wanted to shock people into awareness by bringing onto the streets of London what happens in the Islamic State daily.

We wanted them to see how ISIS is bringing back practices from centuries ago. In reality, the barbaric nature of their actions and why it so desperately needs to be kept from spreading.

When women are sold like poultry in a bazaar it is inhumane and tear-jerking. Many of the girls managed to call their families on mobile phones whilst in the brothels and said please, please bomb us. When you hear about instances like that, you just want the world to feel it too.”

He then appeared alongside other activists on BBC World Service Radio and gave an account of one of these women.

The friend mentioned at the beginning of this article was called by one of the Yazidi girls in the brothel, according to Kruda. “She was on the phone crying. She said, ‘If you know where we are, please bomb us.’ She said, ‘There is no life after this. I’m going to kill myself anyway. Others have killed themselves this morning. I’ve been raped thirty times and it’s not even lunch time. I can’t go to the toilet, please bomb us.”

Kruda said that those on the other end, whom were “battle-hardened middle-aged young men” burst into tears because they felt so helpless.

This is nothing new for Islam. Though the media and the previous and current administration (that apparently supports human trafficking) has attempted to whitewash Islam, it is a part of what the Koran teaches. In fact, in the latest issue of Dabiq, ISIS’ magazine, the group declares, “Enslaving the families of the kuffār [non-believers] and taking their women as concubines is a firmly established aspect of the Sharia that if one were to deny or mock, he would be denying or mocking the verses of the Qur’an… and thereby apostatizing from Islam.”

Pieder Beelie exposed the principles of Islam regarding taking sex slaves last year following the release of Islamic slaves held in the UK and the whitewashing of Islam being the foundation for the slavery. While Kurdish fighters are seeking to defend and protect their women, the UK continues to remain in denial. Beelie wrote, “Even though ‘Great Britain is in the throes of a rape and pedophilia epidemic unlike anything the country has experienced in living memory,’ The Telegraph’s denial and psychosis are strong. When with the British men arise and defend their women?”

“How many more victims of Islamic slavery will be enslaved before The Telegraph loses its blind eye to the evils of Islam?” he asked. “How about The Telegraph starts to explain how slavery is organic to Islam?”

For those still denying that Islam has anything to do with either the Islamic State or sex slavery, perhaps you can begin with Koran 4:3 and 24, which sanctions sexual slavery and Koran 9:29, which commands religious apartheid.

David Wood is also another who has brilliantly pointed out the texts of the Koran that substantiate that ISIS is the true face of the Mohamed death cult.

This is why the work of Jeremiah’s group is so important. They give care to the wounded Peshmerga so they can continue to fight to bring their people home and destroy their oppressors. These women are family. They are fellow citizens.

As a husband and father of six daughters, my heart breaks for these women and for the men who are attempting to rescue them. This is also why I have seen fit to call out and expose Islam for what it is. May God show mercy to these women and these brave Kurdish fighters in their fight against the Islamic State.