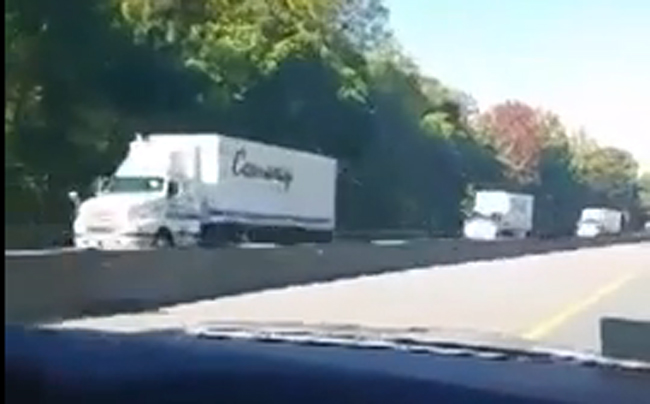 The official story says Highway 64 in Virginia was shut down for “The World’s Largest Truck Convoy” to support the Special Olympics, the goal of which was to raise funds and awareness for the charity.

If the goal was to raise awareness for the Special Olympics, why were local residents so taken aback by the mysterious convoy?  Would anyone be surprised to learn that this was a cover for transporting something that officials wanted to hide from the public?

A video shot in Virginia showed a parade of semitrailers on a freeway that had been blocked off by police; there were no other cars, just semitrailer after semitrailer.

WTVR-TV is reporting Adam Hicks and a passenger were traveling on Interstate 64 in Richmond Saturday when they noticed something unusual.

One person in the video said the convoy started with a series of seemingly identical trucks: “We’ve seen at least 30 so far. Here’s a whole new set of trucks coming up.”

As the video goes on, their disbelief grows.

“I want to re-iterate the interstate is blocked off. No incoming traffic,” said his passenger, who was identified on Facebook as Joyce Ord. “…This is Interstate 64 in Richmond. No idea what’s going on. This is getting more and more bizarre.” (source)