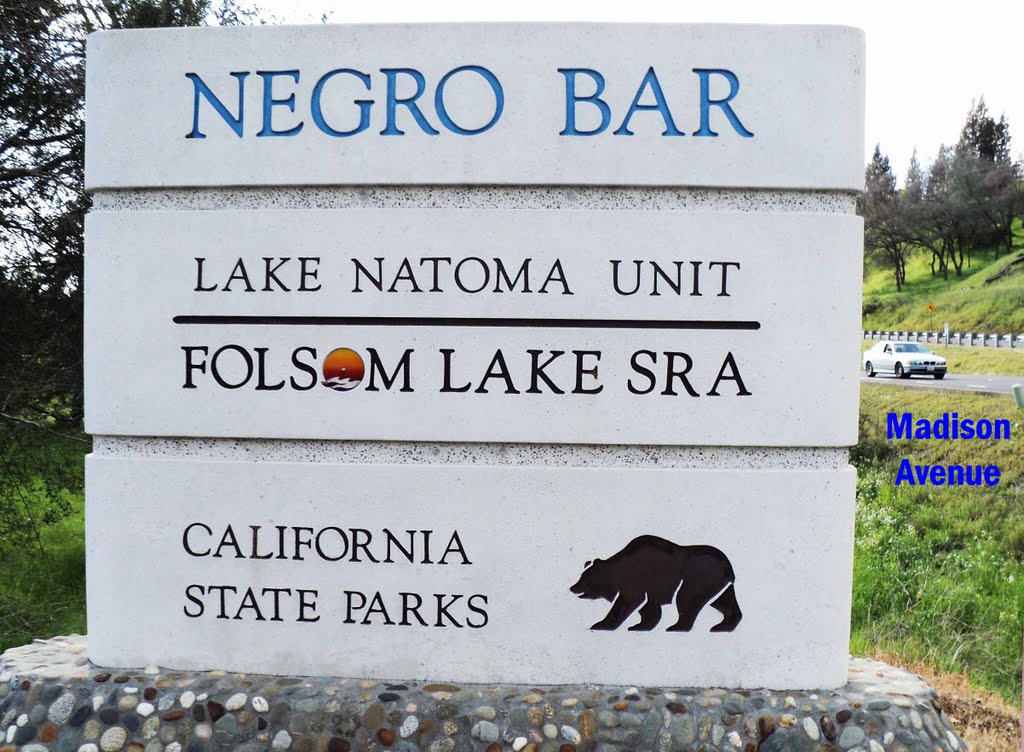 In May, California senators Barbara Boxer and Dianne Feinstein were part of a group of senators calling for “the National Football League to change the team name of the Washington Redskins, declaring that “racism and bigotry have no place in professional sports.”

Imagine my surprise when I happened upon this article in the Sacramento Bee:

“Portions of the bike trail through Negro Bar will be undergoing some much-needed smoothing thanks to a non-profit group and California State Parks.

Walkers, bike riders and joggers will appreciate the trail fix along the north shore of Lake Natoma when the work on the trail is completed. Much of the area suffers from bumps from tree roots, potholes, poor drainage and sand build-up.

Friends of Lakes Folsom and Natoma (FOLFAN) and state parks will repair about 1,300 linear feet of trail in three areas. Work will be done on both trail pavement and shoulders.” Read the rest here.

There is no history on the state park Negro Bar web page. There is no entry on Wikipedia for Negro Bar State Park. From Wikimapia:

“Negro Bar was a mining camp, but it was not the lively mining town so often portrayed in motion pictures. Like many other mining camps in 1848, Negro Bar was little more than a cluster of tents and shacks thrown up to shelter men working along the river.

The community of Negro Bar was called “under the hill” after Folsom replaced the old mining camp along the river. Today it is under the water of Lake Natoma. Only the name remains on the opposite side of the river from where African American miners first started mining gold in 1849-1850. Negro Bar State Park is a reminder that a mining camp once bore a similar name.

James Meredith built a store and later a hotel at Negro Bar. A store could have been anything from a tent with a plank laid across two barrels to a rough lean-to with a few shelves. Hotels were usually large dormitories with bunks stacked in tiers against the walls. Almost anything that could serve as shelter for a large number of men was designated as a hotel.”

From the California Department of Education:

“Although a few African-American miners continued to mine the Negro Bar diggings as late as 1852, the majority of African American miners on the lower American River at that time were mining claims located roughly four miles north at a mining camp known as Negro Hill. Located near Mormon Island, the claim is alleged by some early sources to have been first mined by Mormon miners as early as 1848. A man named Kelsey, an African-American from Massachusetts and a Methodist minister along with other Black miners, rediscovered the diggings in 1849. Together, these men established a community of African-American, Caucasian, Chinese, and Portuguese miners that were to grow as large as 400 persons by 1855.

The success of the diggings near Negro Hill prompted settlement of a nearby hill that became known as Little Negro Hill or Negro Flat. Both of these mining camps and their nearby claims yielded enough gold to keep them going well into the mid-1850s. The riches, however, were not enough to prevent racial tensions from boiling over at least once at Negro Hill. Historian Rudolph Lapp notes in his book Blacks in Gold Rush California (New Haven, 1977) that physical confrontations between Caucasian and African-American miners resulted in injuries, deaths, and arrests in 1855. A court in Coloma, despite the fact that an African-American miner was killed, later released the Caucasian miners involved in the incidents. Lapp also states that Caucasian miners at Negro Hill were also supportive of pro-slavery candidates in the presidential elections of 1856.

Despite these problems, Negro Hill and Little Negro Hill/Negro Flat were the home to a Black-owned store and boarding house and a church headed by a Caucasian Methodist clergyman. The camps were described by contemporary sources as being the home to “sources of hardy miners that made good wages.” Negro Hill, like many placer mining camps in the Sierra foothills was non-existent by the 1860s. The placer diggings that were so plentiful in the 1850s were exhausted by this time.”

The term “redskin” is considered offensive by some (although some have found the actual origin of the word is entirely benign and reflects more positive aspects of relations between Indians and whites), as is the term “negro” (African American leaders say that they associate the term with the long history of slavery, segregation, and discrimination that treated African Americans as second class citizens, or worse).

One could argue both sides of whether these terms are racist (or not, if you are white). But shouldn’t the white gals Boxer and Feinstein show some consistency? I know, that’s asking for too much.

DCG’s post first appeared at Fellowship of the Minds.