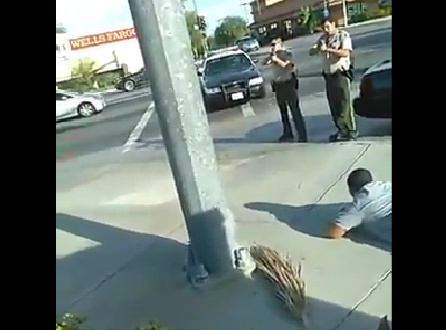 If you’ve ever had the rare opportunity of having the police draw their guns on you for no apparent reason, you know how absolutely terrifying it can be. It’s a completely helpless experience that catches you off guard in the worst possible way, because there’s nothing you can do about it. If someone were to mug you, you would at least have the option to fight the mugger or run away. It’s unexpected, but at least you can react to it.

Not so if the police decide to draw down on you. It flies in the face of your natural fear response to fight or flight, because you can neither fight nor flee. You can’t even freeze up like a deer in the headlights, for that may also get you slapped with a “resisting arrest” charge, or worst. The only thing left to do is submit, which is something every normal human being should not do in any other dangerous situation. You must submit, or you will certainly be hurt or killed.

Full disclosure here, I’ve had the police draw their guns on me, and it was not a fun time.

Back in 2009 I was standing in a parking lot late at night, talking to a friend on my cell phone. Out of nowhere, three squad cars pull up with their lights on. I couldn’t imagine what they were looking for, but I never would have guessed it would be me. Next thing I know, I see 3 flashlights pointed at my face, and several cops are screaming at me, telling me to put the cell phone down.

I told my friend I’d call him back.

They ordered me to walk backwards towards them with my hands behind my head. They had me get on my knees as they searched me. And of course, they didn’t find anything but my identification. One of the officers later explained that I matched the description of somebody in the neighborhood. A local resident had called 9/11 and said that a white male dressed in black, was waiving a gun around and threatening to shoot someone (it was the first and last time I ever wore black pants and a black shirt together).

Since then, I’ve seen hundreds of cell phone videos depicting the police and their domineering antics. None of them reminded me of that night, until I saw this footage on The Free Thought Project earlier today. The clip shows an intense exchange between Alejandro Natividad, and the La Quinta, California police. There was nothing violent or aggressive that led up to this event. Alejandro’s friend and driver was apparently stoned and a little out of his head, and had stopped in the middle of traffic. This garnered the attention of the deputy, who then approached the car to talk to them.

After a short conversation, the driver sped up and then pulled over on the corner. They both got out of the car, as the deputy caught up with them. When he arrived, he almost immediately drew his weapon, and demanded that they lay down on the ground. Alejandro absolutely refused.

You can see about a minute in as the camera begins to shake, that he was afraid for his life. He does everything he can to talk to the deputy, and asks him to put his weapon down. He refuses to get down on the ground as more police officers show up. He refuses to submit, even as he begins to cry. He just stands his ground, and continues to film what he must have known may be his last moments. If he’s seen any other encounter with the police, he had no reason to think that this would end well for him.

After lots of pleading and reassuring the cops that he wasn’t a threat, the police begin to holster their weapons. He was handcuffed, but later released without charges. When interviewed by the Free Thought Project, and asked why he didn’t submit to the demands of the police, he replied “…I was afraid and if I was going to get harmed I’d much rather take it standing than on my face.”

When the police drew their weapons on me, I did what most people would do, and submitted. Alejandro Natividad on the other hand, did not fight, did not flee, and did not submit, which is more courageous than any of those actions put together.