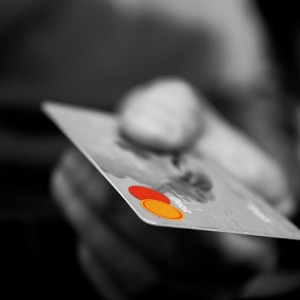 It is that magical time of the year for retailers.  The period between mid-October and late December can often make the difference between success or failure in the retail industry, and this year will be no exception.  As you will see below, it is being projected that Americans will spend a massive amount of money this holiday season.  In fact, what Americans plan to spend on Christmas this year is greater than the yearly GDP of the entire nation of Sweden.  So isn’t this good economic news?  Shouldn’t we be happy that Americans are opening up their wallets so eagerly?  Well, it depends how you look at it.  Even though our spending is increasing, our incomes are not.  As I discussed the other day, 50 percent of American workers make less than 28,031 dollars a year and incomes have been stagnant for years.  That means that any increases in spending must be funded by more debt, and that is not good news at all.

In 2014, approximately 70 percent of all Americans will participate in Halloween.  It seems like with each passing year this dark holiday becomes even more popular, and before it is all said and done it is being projected that Americans will spend a whopping 7.4 billion dollars this time around…

Kicking off the end of year spending season is Halloween. Just how much do Americans spend on trick-or-treating and other Halloween festivities? The National Retail Federation (NRF) forecasts total Halloween spending—including candy, costumes, and decorations—to come in at $7.4 billion this year.

Yes, you read that correctly.  We are collectively going to spend 350 million dollars on Halloween costumes for our cats and dogs.

Overall, spending on Halloween has risen by more than 55 percent since 2005.  It just seems like Americans can’t get enough of this particular holiday.

According to the National Retail Federation, more than 90 percent of Americans celebrate either Christmas, Kwanza or Hanukkah.

And Christmas in particular has become virtually synonymous with materialism.  This year, the National Retail Federation is projecting that Americans will spend more than 600 billion dollars just on Christmas.

That represents a huge chunk of our GDP as a nation.

Most of that money will be spent on Christmas gifts.  According to a Gallup survey that was just released, the average U.S. adult plans to spend 781 dollars on Christmas gifts this year, which is significantly up from last year…

Americans’ initial estimates of the total amount they will spend on Christmas gifts this year point to an above-average holiday season for the nation’s retailers. While Gallup’s October spending forecast is a warm-up to its key measure in November, it finds Americans expecting to spend $781, on average, up from $704 last November.

Of course holiday spending does not end there.  There are trees to put up, packages to send out and decorations to buy.  The following numbers are from a Forbes article about what an average American typically spends during a Christmas season…

So where is all of this money coming from?

That is a key question.

If our incomes were going up, all of this spending might be good news.  But as the following chart from the Federal Reserve demonstrates, that is not the case… 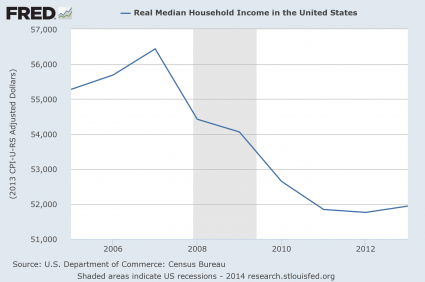 Our incomes are stagnant at best.  But Americans always like to party as if it were the best of times.  So they will pull out their credit cards and spend what they feel they need to spend in order to feel happy once again this year.

But deep down most people realize that this debt-fueled party cannot last forever.

Deep down most people realize that we have some incredibly serious long-term problems that need to be fixed.

As our problems have multiplied, over time Americans have become angrier and angrier.

And right now is election season, and so that is very bad news for Democrats…

Nearly 7 in 10 Americans are angry at the direction the country is headed and 53% of Americans disapprove of President Barack Obama’s job performance, two troubling signs for Democrats one week before the midterm elections, a new CNN/ORC International Poll shows.

Democrats are battling to try and save the Senate majority, while hoping to prevent more losses in the House, which the GOP controls by a 234 to 201 margin.

In the Senate, Republicans need a net gain of six seats, and several state polls in the past month of contested races show that Democrats are in danger of losing control of the majority, and thus Congress.

If the Republicans do take control of both houses of Congress, will that fundamentally change the direction of the country?

I wish that I could believe that, but at this point most Republicans are virtually indistinguishable from most Democrats.

In other words, it is very hard to tell them apart.

As a nation, we are steamrolling toward a date with oblivion, but everyone is trying to put such a happy face on things.

Well, enjoy this time of relative stability while you can, because it is going to end way too soon.