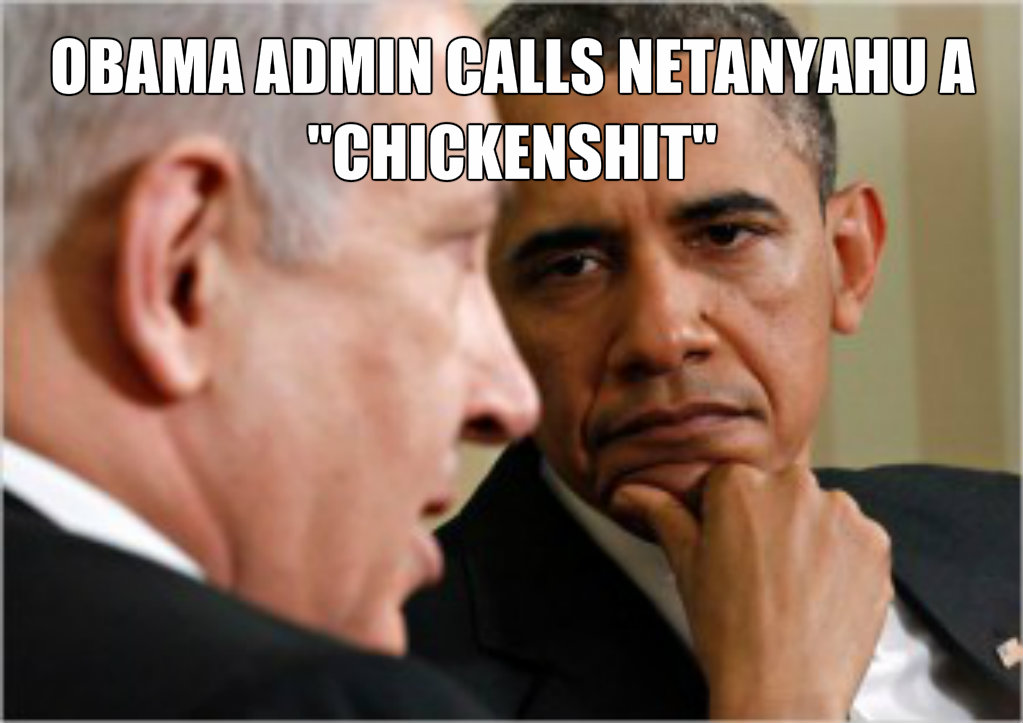 Cowed by the Islamic State, Boko Haram, the Muslim Brotherhood, al Qaeda and his rolling catastrophic failures of supporting savage jihad revolutions in Africa and the Middle East, Obama takes his revenge on the Jewish State.

Indulging the Islamic Jew-hatred he imbibed in his quran classes as a boy in Indonesia, his relentless attacks against Israel hit a new low yesterday.

The Obama administration is on record calling Netanyahu a “chickenshit” who is not doing “anything” to reach an accommodation with the “Palestinians” or with the Sunni Arab states.” All Israel has done is make accommodation — Oslo, unilaterally withdrawing from Gaza, releasing thousands of Muslim terrorists — and the result was more Islamic war against the Jews. When Israel offered Arafat 97% of what the PA wanted, Israel got the second intifada. When Israel withdrew from Gaza, the Muslims living in Gaza elected the genocidal group Hamas to power, whose charter calls for the destruction of Israel.

Everybody knows that Hamas and the PA will never recognize the Jewish state. They have told us that in word and deed.

Here’s what the tinpot dictator doesn’t get. Netanyahu is protecting his nation, his people. Even today, Prime Minister Benjamin Netanyahu went toe-to-toe with the US and the EU over their condemnations of Israeli building in the capital.

It is not the building in the city that is making peace more distant, but rather the condemnation of that construction, Netanyahu said in a combative response to the US and EU for their censure of Israel’s announcement on Monday about moving forward plans to build 660 units in Ramat Shlomo in the northern part of the city, and 400 in the southern neighborhood of Har Homa.

That’s courage in a world prostrating before Islamic jihad.

As for Obama sending out one of his official thugs to leak this deeply insulting trash unbecoming a friend or neighbor, let alone a President, I say one thing. I was right in my book — Obama is an anti-semite.

“The bad thing about him is that he won’t do anything to reach an accommodation with the Palestinians” — that is, give in and surrender to the jihad.

More from the most anti-Israel administration since the founding of the Jewish state: “Senior Obama official: Israeli PM Netanyahu is ‘chickenshit,’” by Kelly Cohen, Washington Examiner, October 28, 2014:

Add another item to the list of insults officials in the Obama administration have lobbed at Benjamin Netanyahu.

A senior Obama administration official recently described the Israeli prime minister as “chickenshit,” according to Jeffrey Goldberg of The Atlantic.

The list also includes descriptions such as “recalcitrant, myopic, reactionary, obtuse, blustering, pompous, and ‘Aspergery,’ ” according to Goldberg.

“The good thing about Netanyahu is that he’s scared to launch wars,” the official told Goldberg, explaining the meaning behind calling the leader of an ally a “chickenshit.”

“The bad thing about him is that he won’t do anything to reach an accommodation with the Palestinians or with the Sunni Arab states,” the official said. “The only thing he’s interested in is protecting himself from political defeat. He’s not [Yitzhak] Rabin, he’s not [Ariel] Sharon, he’s certainly no [Menachem] Begin. He’s got no guts.”

A separate official told Goldberg that the administration believes Netanyahu to be a “coward” on the issue of Iran’s nuclear threat, no longer believing he would ever launch a preemptive strike on Iran’s nuclear facilities… 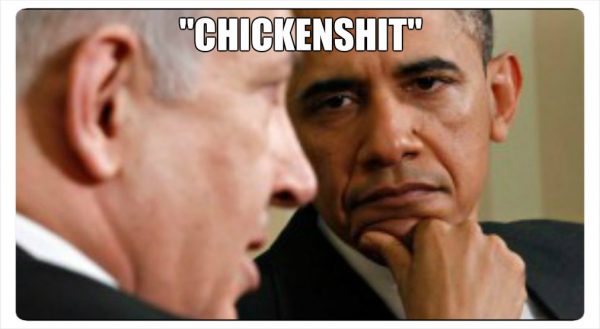