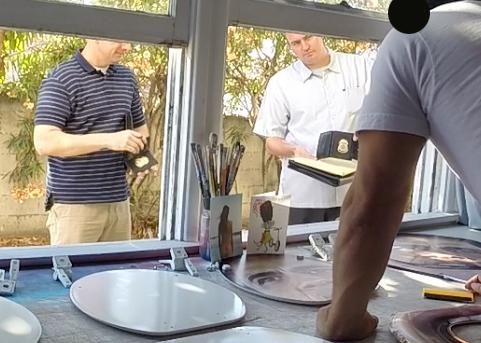 Sabo warns anyone with political opinion could be targeted by feds

Enigmatic anti-Obama artist Sabo received a visit from the Secret Service this week in response to tweets in which he joked about Lee Harvey Oswald returning as a zombie.

Although the tweets were sent out a month ago, two Secret Service agents showed up at Sabo’s home on Wednesday to check if the artist represented a violent threat to President Barack Obama.

In a hilarious exchange, Sabo spoke to the agents while he was working on a toilet seat that features Obama’s face on the lid.

“Did you send out the tweets about bringing back Lee Harvey Oswald as a zombie,” asks one of the agents.

“How likely is that gonna happen?” responds Sabo.

In another tweet, Sabo poked fun at actress Gwyneth Paltrow, who earlier this month received criticism for her fawning adulation of Obama during a Democratic Party fundraiser at her house in Santa Monica during which she told the president, “You’re so handsome that I can’t speak properly.”

IT REALLY WOULD BE A CRYING SHAME IF SOMEONE CALLED TO REPORT A MAN WITH A RIFLE IN THE AREA ON THIS NIGHT. pic.twitter.com/lpgsYNAkHQ

“You’ve really gotta think about some of this stuff you’re tweeting, it could be construed in many different ways,” says the agent.

“I realize we have a fuckhead in the White House and the Constitution no longer means shit, but as far as I’m concerned we still have a First Amendment,” responds the Sabo, before the agents suggest he was advocating violence.

“Unless I could bring Lee Harvey Oswald back as a zombie, then I could see there would be some violence, but until I get the CDC, a way to figure out to make that happen, it’s a dream,” states Sabo.

Sabo subsequently warned that anyone with anti-Obama opinions could also be targeted by the feds.

IF YOU ARE ON TWITTER AND YOU HAVE A POLITICAL OPINION THAT IS NOT LEFTIST, BE SCARED, BE VERY SCARED. OBAMA’S SECRET SERVICE IS WATCHING.

Sabo’s depiction of Obama as the Joker in some of his art serves as a reminder that others have been targeted by the feds simply for making fun of the President, such as the creators of a float in the July 4th annual Independence Day parade in Norfolk, Nebraska which portrayed Obama as a zombie, prompting an investigation by the Department of Justice.