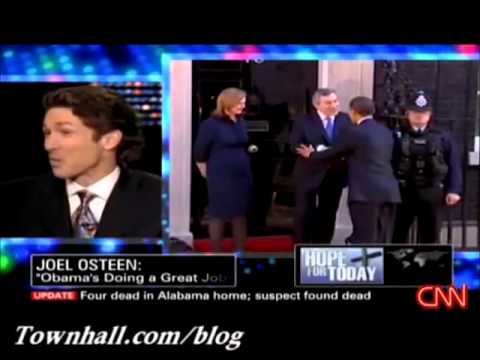 There are still self-professed “Christians” who continue to promote the heresies and unbiblical teachings of Joel Osteen and his wife Victoria. Previously, we pointed out how Victoria Osteen said that our worship of God should be done for ourselves. In an interview with Wolf Blitzer, Osteen said that Barack Obama is a Christian.

Osteen claims that he has been to prayer breakfasts and other events with Barack Obama and heard him express his faith, redemption and salvation.

“I just believe in my heart that he’s a Christian,” Osteen said. “He says he is.”

“Again, I wouldn’t try and push people away,” Osteen continued. “That’s just the opposite of what we’re supposed to do.”

Now, let’s just rehearse what Obama says his “Christian” faith is composed of, shall we?

In a 2004 interview with Cathleen Falsani, Obama said that he “draw(s) from (his) Christian faith, but then went on to talk about growing up with Eastern influences in Hawaii, Muslim influences in Indonesia, his father being an agnostic while his grandfather was a Muslim, and finishing off claiming that he was mostly influenced by Judaism. However, he claims to be “rooted in the Christian tradition. Let’s see how he stacks up to that “Christian tradition.” Obama told Falsani the following:

When asked about prayer and Bible reading, Obama said, “I used to all the time, in a fairly disciplined way. But during the course of this campaign, I don’t. And I probably need to and would like to, but that’s where that internal monologue, or dialogue I think supplants my opportunity to read and reflect in a structured way these days.

As for his job, well we’ve documented how poorly he is doing it, yet, he is doing exactly what he aims to do and that is to destroy America.

However, recall this comes years after Osteen and his wife were interviewed by Larry King and they regurgitated the same nonsense that Osteen said in his interview with Blitzer.

“I think he’s doing a great job,” Osteen said. “I’m impressed of his skill, calmness, his just strength under pressure. I mean these are tough times for him, he got a lot put on his plate. But I’ve been impressed.”

Wow! It doesn’t take a lot to impress Joel Osteen, does it? It takes even less to impress his wife who was asked about Michelle Obama. “I’ve been real impressed,” she said. “I’ve been impressed about the First Lady, she stepped up and she’s done a remarkable job, and under the situation, they have done great.”

King then went on to point out that 12 percent of Americans (I find that utterly ridiculous) believe that Obama is a Muslim and that 35 percent say they don’t know what religion he is (which I think might be factual). He then asked Osteen if he thought that mattered.

“Well, it matters to me,” Mr. Osteen said. “It matters to me that I know he loves the Lord, and I think it’s important that he has convictions from his faith. So to me, it matters when I’m making my personal decisions.”

However, Osteen went on to promote his new Hope for Today Bible, saying, “It’s a living translation of the Bible, which is an easy version to read. And then it’s got our notes besides certain passages. And it’s just to help people maybe to understand the Bible a little bit easier.”

And just what will it help people understand easier? Apparently it won’t help in the area of marriage.

When asked if he thought more states would allow the redefinition of marriage to include sodomites, Osteen said, “You know, I don’t know where it’s all going … I’d love to see it stay between a male and a female, not knocking anybody else.”

Knocking anybody else? Why not? Jesus was clear about what marriage is and what it is not in Matthew 5 and Matthew 19. God was clear about it in Genesis 3. Why can’t Joel Osteen be clear? It’s because he’s a false teacher.

To be fair, at least his wife said, “I just think marriage should be sanctified by the church. It should be between a man and a woman.”

While Osteen said the “God’s best is between a male and female,” it seems that for both Osteens is all about “what they think” rather than what God says. That is the crux of the issue.

My friends, Joel Osteen is in the position he is in because the professed Church has not called people like him out and dealt with him biblically. It’s time the people of God start dealing with false teachers in a biblical manner.