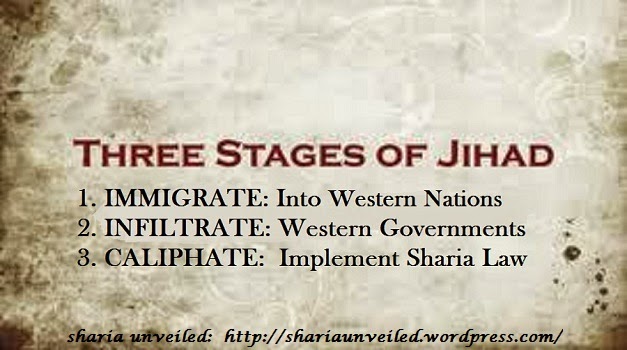 “I feel like my basic human rights have been violated.”
Kaci Hickox, Ebola exposed nurse who refuses to be quarantined

One by one they’re waking up…sleeper cells via lone wolves are wreaking havoc the world over as ISIS marches forward. And our ‘supposed’ Commander-in-Chief drops weapons to them and then says…ooops wrong drop…yeah right…our military does NOT make that kind of mistake…unless they were deliberately given the wrong coordi

Sleeper cells…coming to life after laying low…now ordered to act…by Obama or his puppet masters perhaps…as terrorists acts are happening right here in America… acts of brutality done in the name of islam that Barack HUSSEIN Obama turns what amounts to a blind eye to. Sleeper lone wolf attacks like the Fort Hood Massacre, the naval yard shooting, the beheading of Colleen Hufford in Oklahoma, the ax-attack on NYC police officers, and the recent beheading of a Farmingdale, NY, woman that the media is keeping quiet I might add. And we are also seeing terrorists attacks just across our northern border in Canada with the murders of two Canadian soldiers…Cpl. Nathan Cirillo of the Argyll and Sutherland Highlanders who was gunned down while standing watch at Parliament Hill’s National War Memorial, and the targeted hit-and-run death in Quebec of another soldier…Warrant Officer Patrice Vincent…just two days before.

But the difference between the acts here in the U.S. and the acts that occurred in Canada is that Canadian Prime Minister Stephen Harper was quick to call these acts what they were…“brutal and violent acts of terror”…and said Canada will NOT be brought to its knees by these islamic savages…“We will not be intimidated. Canada will never be intimidated,”…while our most miserable excuse of a president hems and haws so as NOT to step on his brethren’s toes and deems these acts done in America NOTHING but mere ‘workplace violence’…’workplace violence’ NO matter that Nidal Hassan was shouting “allahu akbar” as he gunned down 13 people at Fort Hood…NO matter that Alton Nolan yelled the same vile words as he snuck up behind Colleen Hufford and oh so cavalierly cut off her head.

Sleeper cells…and all who perpetrated these acts were radicalized muslim converts…savages living amongst us…muslim converts turning a now perceived weak America even weaker in the eyes of the world. And when you add in the in-your-face loyalties of Barack HUSSEIN Obama to those out to kill us all, who then had the audacity to say NOT a word about the little American 3-month old baby girl killed in Israel in an act of terror while at the same time having his administration issue an official statement that America “expresses its deepest condolences to the family” of another terrorist shot and killed by the IDF you know we are in serious trouble. Serious trouble as our allies now look at us as NOT to be trusted for how can we be when someone in this miserable administration publicly and on-the-record…and as such had to be authorized at a higher level…lobs insults at Israeli Prime Minister Benjamin Netanyahu and that person…that coward who won’t even show his face or give his name…has NOT been fired for insulting the leader of America’s staunchest ally NOT only in the Middle East but in the world.

Sleeper cells waking up and now there’s Obama-supported stealth jihad hiding in plain sight…ignored by the media for what it truly is as in the carefully calculated spread of islamic…of sharia law…within our country by means of activism and propaganda with the gradual under the radar infiltration of our schools (Common Core), our courts (sharia law used in adjudicating guilt or innocence), and our media through their twisting of facts to support the regime. Stealth jihad infiltrating the very fabric of our American society committed by those whose loyalties lie with Obama and the brethren instead of with the country they call home.

And now stealth jihad has NOT so silently affecting the health, safety, and welfare of the American people. Cases in point…the second nurse to contract Ebola who flew to Ohio NOT feeling well and then flew back to Texas knowing full well that she had Ebola…the doctor in NYC who suspected he was sick and chose instead to ride the subways, go bowling, and eat out at restaurants…and now nurse Kaci Hickox, the most vile of the vile, who refuses to stay in court-mandated quarantine saying her basic human rights have been violated. Caring about her rights and her rights alone NOT giving a damn about the possibility of her infecting those in her hometown as she now refuses even home quarantine. 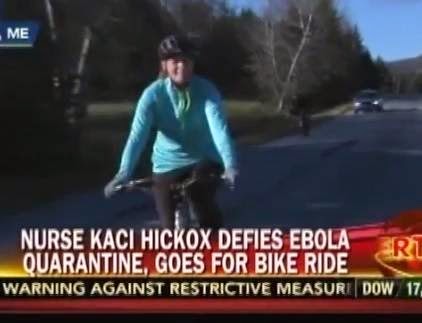 Kaci Hickox…the CDC employee who was working with ‘Doctors Without Borders’ and who had just returned from Ebola-ridden Sierra Leone…the nurse who was recently released from now mandated hospital isolation and quarantine after the Obama White House pressured New Jersey Governor Chris Christie to release her. And proving Obama’s hand is stirring the Ebola pot yet again is the fact that her lawyer…New York civil rights attorney Norman Siegel…who helped secure Hickox’s release was a recent guest at a White House state dinner…a bit too coincidental if you ask me.

Just three more weeks and she would have been free to go her own way yet this most narcissistic and selfish ‘it’s all about me’ woman…a woman who now says she will sue over the infringement of her rights…took to her bicycle yesterday…ignoring the court-ordered home quarantine order…and peddled her way through her town’s streets risking possibly infecting her neighbors as she has in NO way passed the 21-day incubation period. Just three more weeks out of her life to assure everyone she was Ebola-free yet none of that matters to her…typical of liberals who worship at the feet of the man who thought Ebola would be his October surprise…the man who is now finding out that surprise is coming back to bite him.

Stealth jihad both silent and loud is indeed occurring in plain sight but once again is being ignored for the most part by the media…as expected…for another act of stealth jihad has been committed by those who are the pawns connected to the tentacles of this most traitorous of administrations. This time occurring in the guise of Viet-Nam era traitor Secretary of State John ‘Swiftboat’ Kerry who knew damn well that his useless (I believe) anti-Semitic ketchup heiress of a wife had the foundation she chairs…the Heinz Endowment…fund a restaurant…the ‘Conflict Kitchen’ in Pittsburgh, PA…that is using food to ‘educate’…she and he say…those that hate Israel..those that hate Jews.

NO I don’t think so for wrapping sandwiches in anti-Israeli propaganda paper complete with quotes from Palestinians defending terrorism and opposing the existence of Israel printed upon them is anything but educating as it’s a deliberate instigating of the call to jihad by the wife of the man…a representative of the U.S. government who supposedly is still trying to broker a peace accord between Israel and the Palestinians…who is now outwardly supporting the very ones who want to wipe Israel off the map. Makes you wonder just how many other terrorist aligned organizations and groups this woman is now funding that her husband knows about…hmmm.

But sleeper cells awakening and stealth jihad happening here in America today is all par for the course for an administration…for a president…who will “stand with the muslims should the political winds shift in an ugly direction.”

And Congress still won’t impeach the man who is the root cause of it all…and that above all else is indeed the saddest, most pathetic, and most cowardly thing of all.