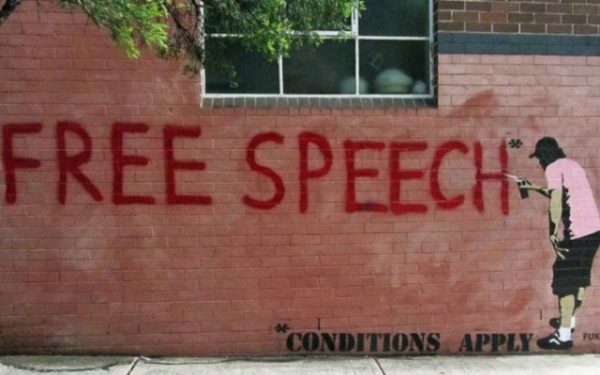 Back in 2013, when Theresa May and the UK authorities banned Robert Spencer and me from ever entering the UK because “our presence would not be conducive to the public good,” what public were they referring to? The 80% of London Muslims who support the Islamic State?

At the time of our banning, I wrote, “In not allowing us into the country solely because of our true and accurate statements about Islam, the British government is behaving like a de facto Islamic state. The nation that gave the world the Magna Carta is dead.”

If anyone needed further proof of my declaration (over and above the mountain of evidence that already exists), craven Home Secretary Theresa May unveiled plans last month for so-called Extremism Disruption Orders, which would allow judges to ban people who criticized sharia law  (deemed extremists) from broadcasting, protesting in certain places or even posting messages on Facebook or Twitter without permission. Theresa May will only accept her misunderstanding, her willful delusion of Islam — if you disagree, she will criminalize it.

A member of the English Constitution Group writes:

Dear Andrew Percy MP,
On the 800th anniversary of our Magna Carta assuring the people’s freedoms and liberties, I should be interested to know if under the proposed measures outlined in the article below, whether, as George Orwell said “truth is to be the new hate speech” to usher in the proposed Eurabia under Sharia Law, arranged by stealth without the public’s knowledge?“The Great Charter” or Magna Carta 1215 was a document setting down rights and freedoms agreed between Monarch and Barons representing the people. NOT with Parliament who have no jurisdiction over it.

Is this why Kings College on behalf of parliament are in the process of trying to replace Magna Carta?
Hoping public ignorance of the subject will allow them to pull the wool over people’s eyes?
Something they cannot do as it is part of the English Constitution and subject to treason laws.

Parliament are also trying to replace our Constitutional Bill of Rights 1688 (agreed for all time to come), again between monarch and people forbidding handing political power to foreign powers, an agreement NOT with parliament, who again have no jurisdiction over it. This also is subject to treason laws which it would breach.

I should hope that as my representative in parliament, you would defend the people against such an invasion, and protect their rights and free speech, for anything else is tyranny.

Anyone who criticises Sharia law or gay marriage could be branded an “extremist” under sweeping new powers planned by the Conservatives to combat terrorism, an alliance of leading atheists and Christians fear.

Theresa May, the Home Secretary, unveiled plans last month for so-called Extremism Disruption Orders, which would allow judges to ban people deemed extremists from broadcasting, protesting in certain places or even posting messages on Facebook or Twitter without permission.

Mrs May outlined the proposal in a speech at the Tory party conference in which she spoke about the threat from the so-called Islamic State – also known as Isis and Isil – and the Nigerian Islamist movement Boko Haram.

But George Osborne, the Chancellor, has made clear in a letter to constituents that the aim of the orders would be to “eliminate extremism in all its forms” and that they would be used to curtail the activities of those who “spread hate but do not break laws”.

He explained that that the new orders, which will be in the Conservative election manifesto, would extend to any activities that “justify hatred” against people on the grounds of religion, sexual orientation, gender or disability.

He also disclosed that anyone seeking to challenge such an order would have to go the High Court, appealing on a point of law rather than fact.

Keith Porteous Wood, director of the NSS, said secularists might have to think twice before criticising Christianity or Islam. He said secularists risk being branded Islamophobic and racist because of their high profile campaigns against the advance of Sharia law in the UK.

“The Government should have every tool possible to tackle extremism and terrorism, but there is a huge arsenal of laws already in place and a much better case needs to be made for introducing draconian measures such as Extremism Disruption Orders, which are almost unchallengeable and deprive individuals of their liberties,” he said.

“Without precise legislative definitions, deciding what are ‘harmful activities of extremist individuals who spread hate’ is subjective and therefore open to abuse now or by any future authoritarian government.”

Simon Calvert, Deputy Director of the Christian Institute, said traditionalist evangelicals who criticise gay marriage or even argue that all religions are not the same could find themselves accused of extremism.

“Anyone who expresses an opinion that isn’t regarded as totally compliant with the Equality Act could find themselves ranked alongside Anjem Choudary, Islamic state or Boko Haram,” he said.

He added: “How many times a day do intellectually lazy political activists accuse their opponents of ‘spreading hatred’?

“The left does it, the right does it, liberals do it, conservatives do it, it is routine.

“Hand a judge a file of a thousand Twitter postings accusing this atheist or that evangelical of ‘spreading hatred’ and they could easily rule that an EDO is needed.

“It’s a crazy idea – the Conservatives need to drop this like a hot brick.”

A Conservative spokesman said: “Freedom of expression and freedom of speech are a vital part of a democratic society.

“In Government, Conservatives have always tried to strike the right balance on freedom of expression, freedom of assembly, freedom to manifest one’s religion, and the need to protect the public. We have never sought to restrict peaceful protest or free speech, provided it is within the law.

“Our proposal to introduce Extremism Disruption Orders reflects the need to go further on challenging the threat from extremism and those who spread their hateful views so that we can keep that democratic society safe.”