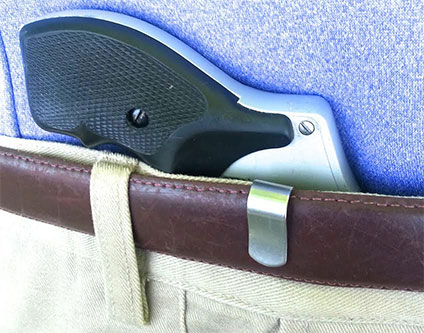 Many years ago, I lived next door to a family that hailed from Oklahoma. Their son was a tall and rather obese fellow who, like most people from Oklahoma, had a strong interest in firearms. Despite the strict weapon laws in California, he would routinely conceal knives and firearms on his person. However, he didn’t need a holster for any of these weapons. He would conceal them in his…how do I put this? In his “belly rolls” is probably the most polite way to put it.

I wish I was kidding.

I can’t imagine what that does to the resale value of a gun, but I digress. For the rest of us who weren’t endowed with natural body envelopes, we need real holsters to safely carry our weapons. And if we need to conceal those weapons, we may need specially designed holsters to keep a low profile.

There are quite a few holster choices on the market today, but only one will be perfect for you. If you’re new to concealed carry, here’s a few ideas to get you started. 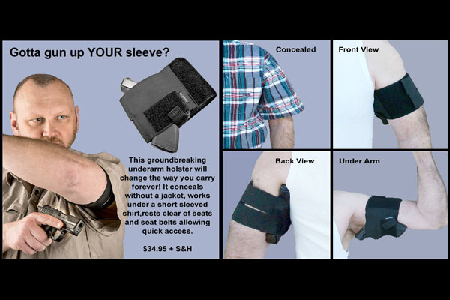 This fairly new product came out last summer, which is fitting, given what it allows you to do with a small handgun. The ArmsBand is a very simple design, that allows you to carry a pistol on your arm, and underneath your sleeve. It addresses a problem that makes most holsters unsuitable for concealed carry. That is, how well can you hide a gun during the summer? Without several layers of clothing, most guns and holsters leave a rather noticeable profile on your body. The Armsband is specifically designed to give you access underneath a short sleeve shirt. 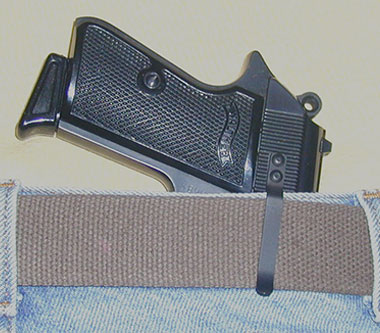 This one technically isn’t a holster at all. It’s a belt clip that can be mounted on the back or side of your pistol. It allows you to clip the weapon onto your waistband, but is still pretty small and unobtrusive, so it won’t get in the way of actually firing the gun. They come in several shapes and sizes, but can be fitted onto just about any pistol, and usually don’t require any gunsmithing. The only thing that would worry me, is an accidental discharge since there is nothing to cover the trigger. You’d either have to keep the weapon unchambered, or make damn sure you can keep the safety on at all times . That aside, this is probably the smallest and simplest way to conceal a firearm. 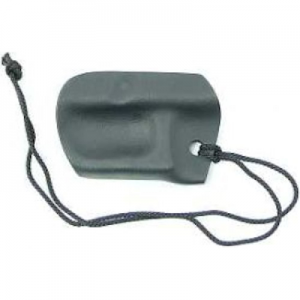 As far as I know, they only make these holsters for Glocks, which is unfortunate because it’s a very small and safe method of concealing a firearm. The plastic polymer clip is shaped to act as a trigger guard. There are no buttons or snaps to worry about, as it is flexible enough to slip onto the trigger, but rigid enough to stay in place. There’s also a small lanyard that allows you to fasten the holster onto your belt loops.

I can personally attest to the safety and strength of this holster. I’ve owned one for about 2 years, and it has never failed to impress. It makes concealing any Glock a cinch. The only disadvantage I can think is the noise. It makes a very loud snapping sound every time you remove it.

Other than that, it takes a little bit of practice to get used to. To unholster it, requires a different hand motion than you might be used to. If it’s attached to a belt loop, and you try pulling the gun straight up, instead of being released from the holster it will pull your pants up past your belly (and your friends will get a good laugh when you try to demonstrate). Instead, you need to pull it parallel to your belt for the gun to be completely released. But, if that doesn’t bother you then I’d highly recommend the MIC Holster. 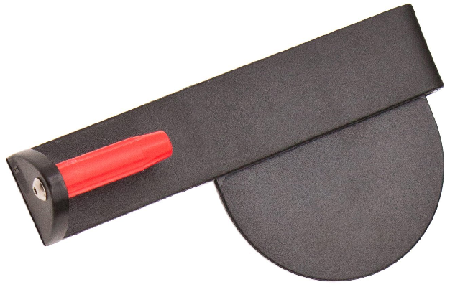 This is probably one of the most unique concealed carry devices to come out in a long time. Like the clip draw, it attaches to your belt or waistband. However, the clip is attached to a long flat piece of plastic, and a peg that inserts into the barrel to keep the gun stable. At first sight, most people assume that it is a bit dangerous. After reading the comments on a review from Guns.com, people seem to to be unanimously concerned about the lack of protection on the trigger. If you read some of the Amazon reviews though, you’ll find mostly positive opinions and very few complaints. It seems that almost everyone who has tried it, is confident in the Versacarry’s ability to properly conceal a firearm. 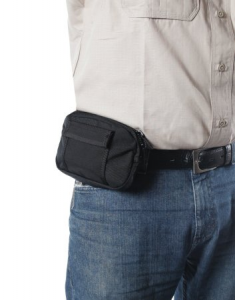 I’m surprised this method isn’t more popular. Maybe it’s because of its resemblance to a fanny pack, that most guys stay away from pouch holsters. There’s a certain image that comes with carrying a gun, and some people let that get in the way of practicality. With that said, using a belt pouch or something similar, is probably the most responsible way to carry a gun.

Most are designed to look like camera or cell phone bags, so they don’t stand out in any way. There’s little chance of you accidentally revealing you have a weapon, which is important in some states where doing so is illegal, even with a permit. You won’t have to worry about the gun being uncomfortable, or accidentally sitting on it. And unlike some of the other entries on this list, you won’t have to be paranoid about what’s brushing up against your trigger at all times.  They come in many different shapes and sizes, and usually sport several outside pockets for carrying your cell phone and wallet. All in all, if I were to carry everyday, this innocuous pouch would be my first choice.

So what do you think? Are these the best choices for concealed carry, or do you think I left some out some of the better options?