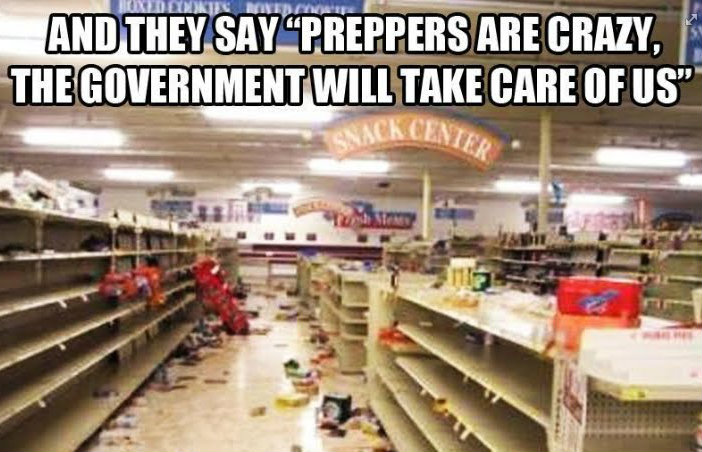 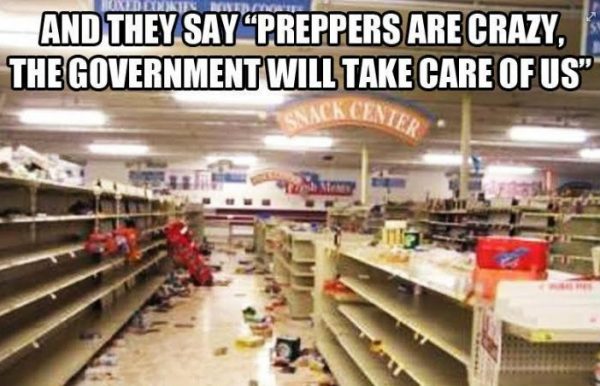 According to a survey conducted by the Adelphi University Center for Health Innovation, 55 percent of Americans believe that the government will come to their rescue when the proverbial poop hits the fan because your big brother really cares. Literally, every alternative media outlet could show conclusive proof that an EMP was going to wipe out the power grid. We could conclusively prove that nuclear bombs were going off in 39 American cities in the most horrific false flag attack in world history and it would not make any difference to 55% of all Americans because of their cognitive dissonance.

The United States is staring at an economic collapse in the face with its $17 trillion dollar deficit, $238 trillion dollars of unfunded mandates (e.g. social security, Medicare, etc.) and a one quadrillion dollar derivatives debt in which the governments of the world are being forced to assume in the form of “bailouts”. Even if Obama and his bankster puppet masters never had any intention of executing a false flag event in order to put this country into martial law in order to fully complete the coup d’état that is already underway, a crash is coming. The banks are going to collapse, the people will riot, there will be food shortages, whether they be planned or unplanned. I do, however, believe that food will undoubtedly be used to control the unruly masses, despite the DHS and their new found friends in the Chinese and Russian personnel which are on our soil.

Are you prepared? At the bottom of this article, I will visually demonstrate to the reader with real time examples of human behavior in groups, how each of us are going to be in very grave danger when the collapse comes. But first, let’s analyze America’s present level of individual and collective preparedness.

How Prepared Is America?

The Adelphi University research center tells us that 53% of all Americans do not have a three day supply of nonperishable food and water in their homes. FEMA and DHS are not about serving the needs of the American people; These agencies are about preserving the status quo of the powers that be. But don’t try and tell that to 55% of the citizens of this country.

Most Likely Causes of a Societal Breakdown

As the TV show by the same name, there are literally a 1,000 ways to die. The following six events represent some of the most likely events which would mortally wound our society.

1. False flag attack as a result of a chemical and biological attack

2. False flag attack as a result of a series of nuclear explosions

A brief summation of the Adelphi study reveals the following:

This means that 56% of those with first-aid kits, 52% of those with emergency supplies, and 47% of those who have more than three days worth of water, will be victimized by those who have not properly planned. Please allow me to put this into a real number for you. Over 130 million teenagers and adults will be in the streets seeking to obtain life-sustaining resources in a very short time following the disaster event. This is a train wreck starting to happen.

Those that would be fortunate enough to survive the initial event, or series of events, would face the following timetable of events.

In the first one to two days, all shelves would be emptied of food, water, guns and medical supplies. There will be no resupply as nothing will be shipped.

On the beginning of the third day, individuals will be in the streets scavenging for anything they can find that will keep themselves and their families alive. If there is a loss of power, many will die as a result of exposure to the elements.

By the fifth day, desperate people will organize into collectives (i.e. gangs) and will go house to house looking for stored supplies from the half that has somewhat prepared. Neighborhoods will begin to organize themselves into local vigilante groups for protection from local gangs who have become desperate. This is the day that many of the police walked off the job in New Orleans in order to protect their families. Groups of police could become the most dangerous groups in society.

In the days that follow, nobody can be trusted. There will be people who will dress up in official looking uniforms (e.g. military, national guard, police) in order to gain entry into a fortified home.

The game changing event will be a civil war. Not only will you have to deal with marauding hordes of resource deficient people, you could also be caught in the crossfire between two, or more warring armies.

2. False flag attack as a result of a series of nuclear explosions. The casualty rate is indeterminable and would depend of the number of cities involved and their relative populations and the size and placement of the nuclear device. Generally speaking, one nuclear device in a city the size of Phoenix would kill 20,000 to 100,000 people. Many more would die in the upcoming weeks due to the effects of radiation.

3. False flag attack as a result of a chemical and biological attack. The casualty rates are indeterminable but past pandemics have wiped out one-third to 40% of a society.

4. EMP attack. The Naval War College tells us that within two years of a power grid take down, that 90% of us would be dead.

5. Military coup resulting in civil war. The casualty rates of war as well as civilians victimizing each other would be impossible to calculate. Conservative estimates would place the rate at 5% to 25%.

6. Economic collapse. It is impossible to exactly determine. I think a safe bet would place this event in the category of a false flag “cyber attack” upon Wall Street and the Banking system. Or, the world totally moves away from the Petrodollar causing our currency to hyper-inflate. The resulting casualty rates would be difficult to calculate. The government would be able to establish order following a brutal crackdown. However, in our weakened state, we would be inviting an invasion. A civil war could break out as well.

NORTHCOM, DHS, FEMA and the Russians have all practiced on quelling domestic disturbances and conducting gun confiscation. Even the elite have gathered their own private armies in preparation for the same civil unrest.

Unfortunately, DHS is not releasing any videos which demonstrate the severity of the civilian uprising that they are practicing for. However, we do have some Black Friday “drills” which exemplify how crazy it will get in the first few hours of a societal breakdown.

The following video is from the 2012 version of Black Friday. It raises the question, that if people will act like animals with depraved indifference towards the welfare of their fellow human beings in the first few minutes of a Black Friday sale, what will they do when it comes to food, water and guns?

If you think that this phenomena is just confined to 2012, think again. The following video is from last year’s version of Black Friday.

At minimum, there is an economic collapse in our near future with the massive debt which is unsustainable. The presence of the NDAA and EO 13603 speaks to the government’s plans to deal forcefully with any disturbances. The preparation by DHS is unmistakable with its acquisition of over two billion rounds of ammunition and 2700 armored personnel carriers. And when we see foreign troops (e.g. the Russians and the Chinese), we should all be gravely concerned. Additionally, FEMA,  and DHS, both last and this year have engaged in a seemingly endless set of disaster planning drills which parallels the content of this article.

To the 55% who are clueless, take out an insurance policy and begin to store food, water guns and ammunition. To everyone else, who has at least some idea of what is going on, begin to reach out to your neighbors because you will need the additional safety that numbers can bring.

And what will the resulting martial law look like? A clear picture of this eventuality is beginning to emerge and that will be the topic of the next part in this series.