Lord Monckton is also a British public speaker and hereditary peer, known for his work as a journalist, Conservative political adviser, UK Independence Party political candidate, and for his invention of the mathematical puzzle Eternity.

One of the many dismal failures of the GOP since 2008 has been its failure to get to grips with the [Obama] birth certificate issue.

The reason for the Republicans’ cowardice was very clearly spelled out to me by a senior and experienced GOP congressman over dinner at my club in Washington, D.C., a couple of years ago. “We all know the birth certificate is bogus,” he said, “but we also know that anyone who dares to raise the issue will have his or her reputation trashed by the communist left.”

Monckton believes that it is only when the GOP commands both the Senate and the House that it may find the cojones to do something about the birth certificate. Now may be the time. With the Republicans in control of the Senate, they will have the opportunity to do what should have been done long before now: to set up a formal inquiry into the numerous grave irregularities in Mr. Obama’s birth certificate.

Yesterday’s election is also the last election before Obama’s eight-year tenancy of the White House expires without the option to renew. Monckton maintains that if Sheriff Joe Arpaio does not act now, on the basis of the overwhelming evidence in his possession, then Obama will survive to the end of his second unlawful term as “president.”

Lord Monckton ends his op/ed with this:

I very much understand the embarrassment and humiliation that the entire governing class of the United States would have to endure if a conviction resulted from the prosecution of the person who forged the “birth certificate.” (I am not free to say who she is.)

For there would then be an undeniable question mark over Mr. Obama’s eligibility to occupy the White House. Impeachment would inevitably follow. Furthermore, all of the controversial bills passed during his lamentable “administration” would have to be stricken from the record. Bye-bye Soetero”care.”

All of these consequences of the bogus “birth certificate” would be severe. They would be embarrassing. But not half as embarrassing as the knowledge that the world is sniggering behind its hand at the failure of the United States to maintain a system of justice sufficiently robust to bring prosecutions where the evidence is so plain.

If the GOP wins the Senate, and even if it does not win the Senate, let it at last find the guts to do what it should have done long before now. Let it say yes to Sheriff Joe’s request that it should initiate a congressional investigation of this affair. […] Enough is enough. It is time for Uncle Sam – and the GOP – to find the cojones to act. 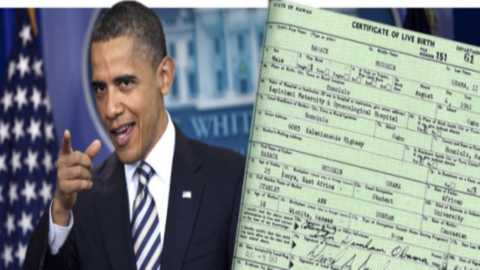