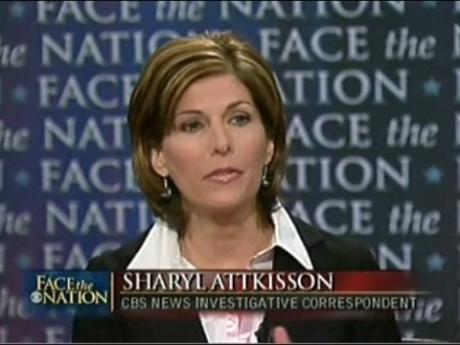 Some might recall the mysterious and highly controversial resignation of popular CBS correspondent Sharyl Attkisson.

Last Spring, there was a lot of talk that the resignation was forced, due to her “anti-obama reporting.” There had also been allegations that her computer was hacked by our own federal government. Though investigations were promised, there have been no findings.

In the end, many believe that her tough reporting, on stories like Benghazi, made her a likely target.

Many also believe that the obvious CBS connection to the White House was the final nail in Attkisson’s coffin. For those who are unaware, David Rhodes (President of CBS) is the brother of Ben Rhodes (Famous for his role with the Benghazi “talking points”).

It seems like the deck was stacked against Sharyl Attkisson, or any conscientious reporter at CBS who might have dared to buck the establishment.

So, if Obama has an “enemies list”, you would not be surprised to find a reporter like Sharyl Attkisson on it.

Attkisson says “yes” in a recent interview with The Hollywood Reporter:

CBS executives suspect that the government hacked your computer, and CBS computers, but there’s been no accountability? CBS just dropped the matter?

As far as I know, although what they told me was they wanted to heavily pursue it and find out who was responsible. I discovered on my own they have a computer security specialist working for CBS. … But nobody ever questioned me, came to my house, checked the security of my system, asked me for more information, or followed up with me.

Do you believe that people working for the president of the United States hacked your computer and spied on you?

The way you phrase the question makes me want to couch it a little bit. I have been told by two computer forensics experts that a highly sophisticated entity using abilities outside non-government resources, using software proprietary either to the DIA, CIA, FBI or NSA made repeat remote intrusions into both my computers over a period of time. And we have evidence of a government computer connection into my computer system.

And why do you think they would target you as opposed to more partisan voices, like Rush Limbaugh or Glenn Beck?

The question carries the assumption that they haven’t targeted others. I kind of assume I’m on a list. I don’t think I’m the only one, along with James Rosen and the Associated Press, that garnered special attention. There’s probably a list of people.

I’ve been told there is such a list, yes.

And who do you suspect is on that list?

Well, there’s an internal email that indicated reporters who were working with leakers in government agencies or perceived as enemies of the White House are being targeted. So I think that’s probably accurate — anybody that they perceive as harmful to their agenda or working with leakers and whistle-blowers, which I did a lot of.

Do you have sources who told you the names on that list? Is Rush Limbaugh on that list, for example?

Another reporter told me — I can’t remember who — that they thought he was on some sort of target list, but I don’t know that to be the case. I have someone who told me the existence of a list but not the names on it.

You can read the full interview here…

Regardless of whether there is an official “list”, or not, is largely irrelevant. For anyone who can not see what happened to Attkisson, they just aren’t looking at the obvious.

Among the controversial stories she covered at CBS: Benghazi. Just as she was digging below the surface of the Obama coverup, she was cut off and shut down by her network bosses.

Here’s the crux. The Rhodes brothers.

Ben is a deputy national security advisor to Obama and writes speeches for him. In September 2012, Ben was “instrumental,” according to ABC News, in changing the White House talking points (the story) on what happened in Benghazi.

Ben’s brother, David, is president of CBS News. Attkisson was working for David. She was investigating all the changes (12) in the Benghazi talking points. She was shut down.

Nothing to see there, move along, eyes straight ahead, go back to sleep, zombie-zombie, it’s all good don’t worry, be happy, hope and change, the audacity of whatever.

Now, on top of this, Attkisson’s computers, at work and at home, were hacked while she was still at CBS. The network acknowledged this and said “they were investigating.” They’re still investigating. So are other unnamed entities.

This is just one of many reasons that mainstream news can no longer be trusted. And for those of you who think that Fox News is the exception, I would respectfully disagree.

When a courageous and conscientious voice shouts from behind the wall, that voice is quickly silenced to avoid damage to the powers that be. Some of these “voices” end up permanently silenced, just like Andrew Breitbart and Michael Hastings.

Some people think that Sharyl Attkisson was a conservative reporter. She reluctantly declines to be labeled as such. She was simply after the truth.

Unfortunately, the truth isn’t very popular in D.C. these days.