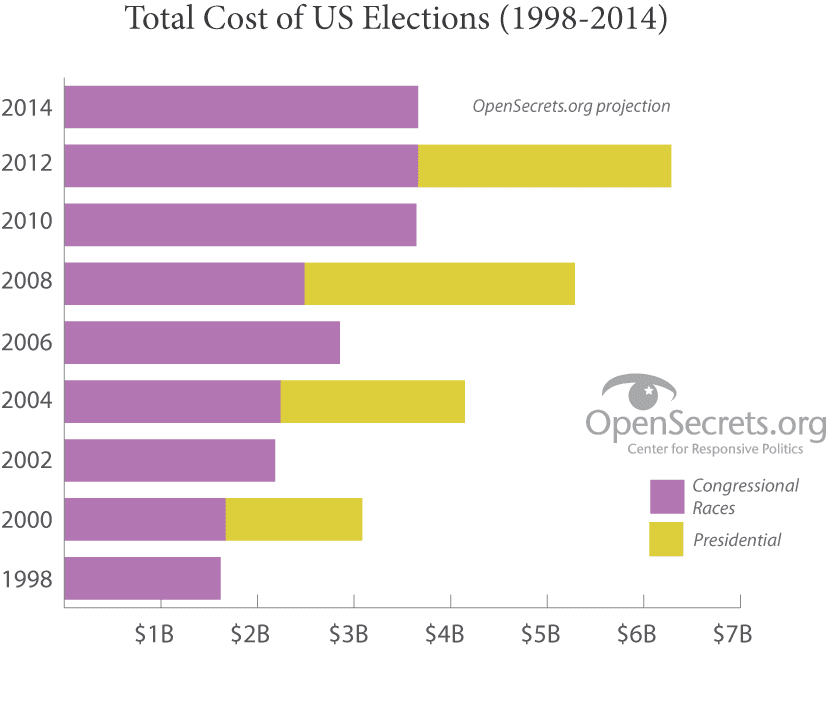 Outrageous, I know, but the sobering statistics are in and it doesn’t look good for the American electoral system. US politicians and their SuperPACs, made legal after the Citizens United ruling, spent roughly $3.7 Billion, according to OpenSecrets.org:

“Taking into account new disclosures made in the last week and adjusting our projection models, CRP now predicts that the 2014 election cycle will cost at least $3.67 billion, or slightly more than the 2010 election, which cost $3.63 billion. That figure takes into account only spending disclosed to the Federal Election Commission and does not include funds spent early in the cycle…”

Then it gets worse. Not only are elections astronomically expensive, drawing an inherent conflict of interest between money power and government, the amount of public donations to candidates are going down while the amount from SuperPACs continues to rise. Elections are increasingly bankrolled by a handful of rich donors and special interest groups, and the results of this experiment are pretty much in.

“As the post-Citizens United campaign finance system matures, we’re seeing evidence that the traditional campaign apparatus has been overtaken by shadow counterparts,” said Sheila Krumholz, executive director of the Center for Responsive Politics.

The sheer amount of campaign ads, mostly negative, is overwhelming. According to statistics released by the Center for Public Integrity, there were at least 908,000 campaign ads that aired in 2014 in the US as of October 31st. That number, by all estimations, has now surpassed 1 million.

Despite all of this spending, or possibly because of it, people increasingly reject the two (R,D) corporate parties. And while 40% or more people identify as independents, there is very little to no representation for their views on the ballot. Clever laws crafted by the political establishment such as “Top Two Primaries” make it nearly impossible for independent candidates to get on the ballot in some states. In places where there are 3rd party candidates, those candidates largely ignored by the corporate media that openly admits that no one likes either of the two major parties, they just don’t talk about the alternatives.

The clear fact that American elections are bought and paid for by interest groups and the wealthy does not go unnoticed by the younger generations. Many of them have given up on voting, despite the two parties constantly vowing to connect with potential young voters.

These promises ring on deaf ears following the government’s blow to credibility after young people last turned out to vote for Obama on ’08, only to be marginalized once again by his policies. America is an Oligarchy, and empty promises, even helpful reforms, will not change that. Young people get that.

The options are few for those who understand how awful the government has become as a whole, but still would like to see positive change. Voting in 2008 didn’t change shit, lets be honest about that. Voting, to those who seek action, has become at best a let-down, at worst an excuse to be complacent. The illusion of democracy is very real, and is one of the greatest threats to world peace and freedom.

Every action that is taken via government is ordered by a handful of old rich men, and carried out by broke young people. But seeing as the government has failed us in every way possible, it’s time for the youth to create our own societies, our own institutions, our own plans. If the government chooses to be an oligarchy, then we must choose to not participate in that unjust system. We need to stand up and say “We’re tired of bombing countries all over the world, we’re tired of bailing out Wall Street, we’re tired of being spied on.” We must act on these ideas, and as far as I’m concerned, the act of voting has completely failed the youth. What do you think we should do to make positive change? Let us know in the comments below.