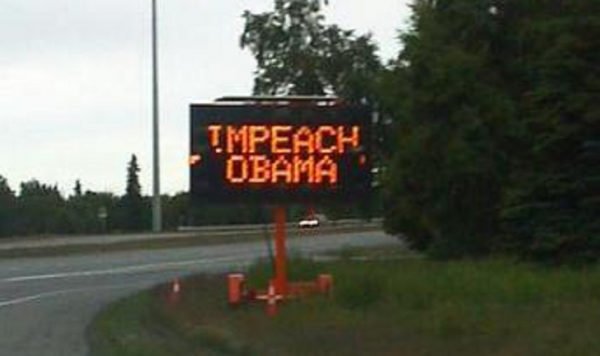 Now that they’ve seized control of the Senate, will Republicans move to impeach President Obama?

The Family Research Council, one of the America’s most influential conservative lobby groups, last week called for the GOP to launch impeachment proceedings against Obama if they captured the Senate.

Ted Cruz, who built his reputation on attacking the President, is also set to butt heads with Senate Majority Leader Mitch McConnell, whom he failed to endorse. Some speculate that Cruz, who already wants to impeach Eric Holder, could launch an attempt to impeach Obama should the President try to pass blanket amnesty for illegal aliens by executive order.

Judge Andrew Napolitano also told Fox News this week that Obama could open himself up for impeachment if he attempts to legalize millions of immigrants who broke the law to enter the United States.

Then there’s a whole host of other reasons that could be used as grounds for the impeachment of Obama.

The attack on the U.S. mission in Benghazi, aiding terrorists in Syria, Fast & Furious, undermining the authority of Congress with regard to the attack on Libya, assassinating Americans via drone strikes, exceeding Congress’s power to regulate interstate commerce via Obamacare, amongst many others. Indeed, at least 27 of the 35 articles of impeachment introduced against George W. Bush by Dennis Kucinich also apply to Obama, and then some.

But while there are a plethora of reasons to impeach Obama, is the Republican leadership – are the RINO’s – really likely to get behind it?

Not in a million years. Why? Because it would hugely increase Hillary Clinton’s chances of victory in the 2016 presidential election.

Currently, Hillary has absolutely nothing to run on other than the fact that her genitals are on the inside of her body. She has no way of distancing herself from the firmly rejected Brand Obama. She offers nothing new, nothing different. Hillary’s only hope will be to blame Republicans for whatever goes wrong over the next couple of years. She would also exploit any talk of impeachment to accuse the GOP of caring only about retribution, not running the country. Impeachment would actually provide Hillary with something to run against, which is why it’s highly unlikely to happen.

While impeaching Obama would undoubtedly be bad for the Republican Party going into 2016, it could be one of the only actions that will save America from collapse in the long term. Impeachment would finally set the precedent that the Constitution and the rule of law actually still means something. By failing to impeach both Bush and Obama, the benchmark that Presidents can violate the Constitution at will has been enshrined as the status quo. This is why America is turning into a Banana Republic.

But I mean who really cares about that, right? Remember, at the heart of power, neither of the two establishment parties really give a damn about America’s best interests. They just want their people to at the helm of the ship even as it’s sinking. They’re quite prepared for America to plummet to the bottom of the Ocean, so long as they’re able to re-arrange the deck chairs on the Titanic.

Remember it was the Obama administration’s Justice Department that granted full immunity to the Bush administration for its global torture program. At the very top, these people look after each other.

Which is why impeachment is a forlorn hope, and an ominous example of why the two party monopoly continues to cause great harm to everything that America stands for.