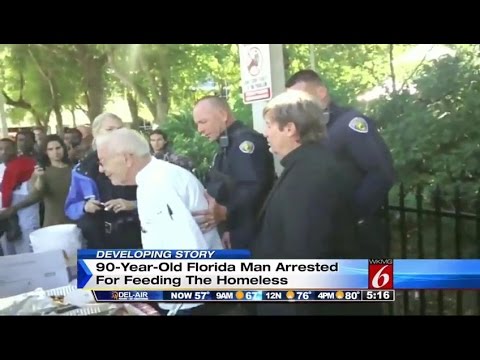 Mayor says homeless should be forced to have “interaction with government”

A 90-year-old World War 2 veteran has been apprehended and charged by police in Fort Lauderdale yet again after defying a new law that criminalizes feeding the homeless.

After his initial citation on Sunday for violating a recently passed city ordinance that prohibits the sharing of food, Arnold Abbott, founder of Love Thy Neighbor, garnered international media attention as his story went viral, but that didn’t stop police from interrupting another event last night on Fort Lauderdale Beach during which Abbott dished out free food to the homeless.

After police recorded the event from a distance, Abbott was eventually escorted away during an interview with a local news station before being fingerprinted and charged. Along with other volunteers, he could face a $500 fine and up to 60 days in jail.

“The good news is that there is pressure being put on the city of Fort Lauderdale to do something about a law that is not only unfair, it’s repressive,” Abbott, who has been feeding the homeless for 23 years, told Local 10, adding, “It’s our right to feed people, it’s our First Amendment right and I believe in the fatherhood of God and the brotherhood of man, and we should be allowed to feed our fellow man.”

However, Mayor Jack Seiler doubled down, arguing that homeless people should be forced to have “interaction with government” and cannot be taken care of by fellow citizens, adding that Abbott’s activities represented a “public safety” and a “public health” issue.

Seiler’s comments provide an insight into why authorities are really cracking down on Fort Lauderdale residents feeding the homeless – because they are threatened by such individuals not being dependent on the state. While governments are perfectly content to oversee a vast welfare state that keeps people below the poverty line or worse, the notion of fellow citizens helping each other out cannot be tolerated.

“What the city is doing by cutting out feeding is very simple — they are forcing homeless people to go dumpster-diving all over again,” Abbott responded. “They will steal. That’s what the mayor is forcing the homeless to do.”

However, more homeless people being locked up for stealing isn’t going to worry the state. In fact it’s an economic incentive to pour more criminals into the meat grinder of America’s prison-industrial complex, where overcrowded jails equate to obscene profits for an unholy alliance of government and private corporations who make money off highly exploitable cheap labor.

Feeding the homeless is being criminalized all across America. A report released by the National Coalition for the Homeless last month found that 21 major cities have restricted sharing food with the homeless while 10 other cities are in the process of doing so. Founder Michael Stoops called the enactment of five ordinances criminalizing homelessness in less than six months in Fort Lauderdale “unprecedented”.

Abbott has vowed to continue feeding the homeless despite facing the threat of jail time.

“I’ll fight for the beach as long as there’s birth in my body,” he asserted.