Economist Martin Armstrong is predicting that rising resentment against the status quo as a result of economic inequality is likely to cause a serious political uprising before 2016.

“It looks more and more like a serious political uprising will erupt by 2016 once the economy turns down. That is the magic ingredient. Turn the economy down and you get civil unrest and revolution,” writes Armstrong.

In making the forecast, the economist cites the case of 90-year-old World War 2 veteran Arnold Abbott, who is being targeted by authorities in Fort Lauderdale for defying a newly passed city ordinance that criminalizes feeding the homeless, an example says Armstrong of how “laws in the USA have simply gone nuts.”

Armstrong, who correctly predicted the 1987 Black Monday crash as well as the 1998 Russian financial collapse, asserts that the downfall of the system will be its inability to gauge the anger that Americans currently feel towards their government.

“You just cannot make up this stuff. And the Democrats cannot figure out that the people are getting pissed-off at who is ever in office? And what about the police?” asks Armstrong. “Is this just turning into thugs with badges who just enforce whatever law some nut-job politician writes? What if they passed a Herod type law to curb population and decree that everyone must kill their first-born. When does reason ever return to the police force these days? They no longer protect the people – they protect the politicians against the people.”

As we reported back in August, the U.S. Army is preparing for civil unrest in the United States. A 132-page document entitled U.S. Army Techniques Publication 3-39.33: Civil Disturbances outlines how troops may be required to deal with “unruly and violent crowds” where it is “necessary to quell riots and restore public order.”

However, more widespread dislocation is only likely to occur in the aftermath of an economic collapse which impacts a huge number of Americans. As we have seen in numerous countries across Europe, including in Belgium just today, crippling austerity measures combined with anemic economic growth have set the stage for violent unrest.

In a February 2013 article entitled Why the Banking Elite Want Riots in America, we outlined why the political class is perfectly content to engineer and exploit social unrest as a means of paving the way for the IMF to engage in its tried and tested method of asset stripping and looting a nation.

With polls showing some 74% of Americans are already angry or dissatisfied with the government, further economic hardship could prove to be the straw that breaks the camel’s back. 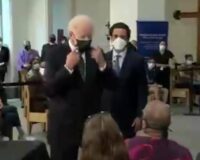 Video Shows Biden Get Inches from Woman's Face and Tell Her to Social Distance
June 14th, 2021 Flag And Cross