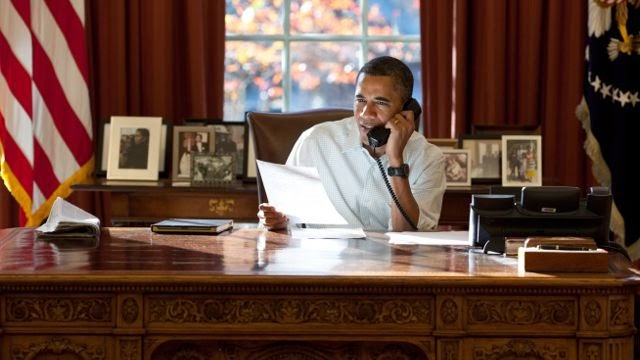 “But what I’m not going to do is just wait for the GOP to pass an immigration bill.” – Barack HUSSEIN Obama at Wednesday’s press conference after being steamrolled by the Republicans

Whew…we did it and we did it BIG! The Republicans are back in control of the Senate and have the largest majority in the House since the Hoover era. In other words, Barack HUSSEIN Obama and his failed politics and policies have, for the most part, been rendered politically impotent.

But true to form, at Wednesday’s press conference, Obama tried to blame everybody but himself for the Republican steamrolling his politics and policies got. Saying, “The election results are clear. I still have a mandate for my polices from the two-thirds of Americans who didn’t vote,” Obama just does NOT get that it’s quite the opposite…those NOT voting were his very own sheeple, kool-aiders, and party loyalists.

And with the Republican victory…a victory BIGGER than even the talking heads had predicted…America loudly told Obama that they totally reject him and his politics and policies. And with the Republicans now giving new meaning to the words ‘lame duck,’ this most miserable excuse of a president still, unfortunately, has the power of the veto along with his infamous ‘pen and phone’…which gives him the ability to issue Executive Orders ad-nauseum. And we know Obama will issue a plethora of Executive Orders as ‘payback’…as revenge… to hurt ‘We the People’ for daring to cross him by voting against him. And while Executive Orders are technically policy or procedure issued by the president that apply only to Executive Branch employees…they are now being used to direct certain ‘tasks or actions’ to Cabinet members along with some Executive Orders having the ‘force of law’ after being approved by the Senate and/or the House…and it’s this approval that must be stopped.

But even with all this leeway of sorts, Obama is forgetting two important things… Congress knows that his Executive Orders come from a desire to bypass them and that just like Executive Orders can be made into law they also can be overturned… that is if this new Congress is serious about undoing the damage this man has done to our country. First thing they must understand is that any Executive Order that has any effect on individuals that are NOT government employees is a violation of Article I Section I of the Constitution, meaning Congress has a responsibility to both ‘We the People’ and the Constitution to veto any Executive Order that has any effect on any non-governmental employees.

And while Executive Orders, most of the time, are quite innocuous in their intent even though they might be used to create major policy changes, we must fear Obama’s Executive Orders for they are maliciously and deliberately being used against the American people for nefarious purposes. Case in point…Obama plans before this year’s end to grant amnesty to at least 11 million ILLEGALS currently residing in this country and doing so through Exec­­­­­­­­­­­­­­­­­­­­­­­­­­utive Order even though two out of three Americans are opposed to this.

And while there is NO specific provision in the Constitution that permits amnesty per se, there is a “grant of executive power” given in Article II of the Constitution which allows Obama some degree of ‘discretionary power’ in issuing this order if he deems it to be both ‘necessary and proper.’  In fact, Article II, Section 2 of the Constitution gives Obama broad pardon powers even to those breaking federal laws, however, this is negated by the fact that Obama has NOT enforced the immigration laws currently on the books. And with Article II Section 3 listing the duties of the president, the next from last clause clearly states that “the president must take care that laws are faithfully executed.” So if Obama modifies in any way the current immigration laws on the books through Executive Order, or if he chooses to selectively enforce only certain provisions of said laws through Executive Order, he is then in direct violation of this clause thus making his Executive Order null and void.

And adding to Obama’s possible chagrin is the fact that Executive Orders…even those orders issued by the man who thinks himself America’s king…are subject to judicial review. And this means Obama’s Executive Orders can be struck down and rendered null and void if the Supreme Court deems said orders to be unsupported by statute. And this is one critical reason why Obama wants to stack the highest court in our land with left-leaning liberal judges.

And with any Executive Order issued by Obama needing to find support either in the Constitution through a clause granting him a specific power, or by the delegation of said power by Congress to him…if said support cannot be found and Obama issues the order anyway, Congress itself can overturn the Executive Order by simply overturning parts of the order instead of going after the finalized order itself. For example, if the Executive Order is based on a statute, Congress can change that statute, thus nullifying the order. Or Congress can refuse to fund any activities that derive from all or part of said order. And the only way this would NOT apply is if Obama acts according to an exclusive power granted to him by the Constitution.

Simply, this means that any of Obama’s Executive Orders can be overturned by either the Supreme Court through a specific case brought in front of them, or by Congress passing legislation that would conflict with the order by their refusing to approve or appropriate funding to enforce the order.

And while Obama could and would veto any such ruling from Congress, Congress can still override his veto with a two-thirds majority that would nullify any Executive Order he issued. And even with the huge Republican win this past Tuesday, such an action would still require a super majority vote…meaning some Democrats would have to crossover and vote with the Republicans. But please remember, this is NOT an impossibility as the Democrats coming up for re-election in 2016 might fear the mandate ‘We the People’ just sent to Obama and the left enough to realize that they would be next if they went against the wishes of the American people and sided with the now politically toxic Barack HUSSEIN Obama.

But there is another way Obama could grant amnesty to the 11 million ILLEGALS if he chose NOT to go the Executive Order route…he could issue a ‘policy directive’ but that too would give Congress the same authority to get rid of all or part of said directive the same way they could override an Executive Order…that is if they have the backbone to ignore the race card that would be thrown at them and do so.

So while Obama keeps bloviating that he thinks it’s safe to say that he’s shown a lot of patience in regards to the Republicans stonewalling immigration reform and to the criticism he’s received over his issuing of numerous Executive Orders, I think I’ve shown a lot of patience by NOT saying until now that Barack HUSSEIN Obama is totally and completely full of_______well you guys fill in the blank with your own choice of the many descriptive words that I’m sure come to mind.