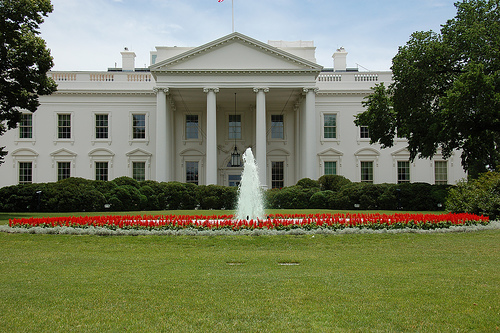 Sgt. Manny Vega is a former Marine who is now an active member of the Patriot Militia. On Tuesday Night he left a victory celebration in Virginia to personally deliver a message to Barack Hussein Obama, while standing outside The White House. Vega was “armed” with nothing more than a megaphone and his first amendment right to free speech:

On the evening of November 4th, Vega was enjoying a victory celebration in Richmond, VA, for Congressman elect Dave Brat when he felt the urge to ‘do’ and ‘say’ something more.

He and a couple of his fellow patriots made the decision to undertake a road-trip of sorts and travel over an hour so they could verbally express their expectations and opinions over the GOP win, with maximum volume, directly in front of the People’s House.

He exercised his First Amendment right and let Obama have it, in no uncertain terms. I can’t imagine the intestinal fortitude that it must have taken in order to call out the president in such a way. Sgt. Vega, in this short clip, went so far as to tease Obama about his golfing obsession and his disrespect for our Constitution, as well as ask him for his resignation. Sgt. Vega also threw in a few “birther” jabs too. He referred to Obama as an ‘usurper’ and demanded that he vacate the White House.

Election Day brings a lot of things into perspective for many of us. Vega told Leekpost, “These politicians are our public servants and they will maintain their positions only by serving the American people.”

Servant leadership? What a novel idea!

Amen to that Sgt. Vega. I wish we had more men like you.

But on Tuesday Night he was speaking for all of us.