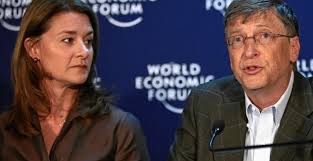 Bill Gates is the multibillionaire founder of Microsoft, whose net worth is estimated to be a mind-boggling $79.1 billion.

Via his eponymous foundation, Gates is also famous for his philanthropy, a word that the dictionary defines as “the desire to promote the welfare of others, expressed especially by the generous donation of money to good causes.”

One of the funding outlets of his Bill and Melinda Gates Foundation are vaccines for poor people in the Third World. But a Freudian slip that Gates made in a speech at the 2010 TED conference belies the philanthropic purpose of those vaccines.

In his speech, Gates was on the subject of how to reduce global warming by lowering the amount of carbon dioxide (CO2) from Earth’s atmosphere. A major way to do that is to reduce the world’s population. Beginning at the 1:03 mark in the video below, Gates said:

“The world today has 6.8 billion people. That’s headed up to about 9 billion. Now if we do a REALLY great job on new vaccines, health care, reproductive health service, we could lower that by perhaps 10 to 15 percent.”

You heard it. Gates was championing vaccines as a way to lower the world’s population. Since when do vaccines, which immunize us against diseases, curb reproduction and in so doing reduce the rate of population growth?

Gates’ Freudian slip is dismissed as the stuff of tinfoil-hat conspiracy theorists (as if there are no real conspiracies! See here for examples.)

Then in July of this year, LifeSiteNews reports that the Bill and Melinda Gates Foundation is funding the development of a contraceptive microchip that can be remotely controlled to release hormones that can act as abortifacients — drugs that induce abortion — into a woman’s body for up to 16 years.

Now comes confirmation that a vaccine administered by the United Nations in Kenya indeed contains an antigen that causes miscarriages.

Steve Weatherbe reports for LifeSiteNews that Kenya’s Catholic bishops are charging two UN organizations with sterilizing millions of girls and women under cover of an anti-tetanus inoculation program sponsored by the Kenyan government.

On Nov. 4, 2014, the Kenya Catholic Doctors Association (KCDA) released a statement that the KCDA has found an antigen* that causes miscarriages in a vaccine being administered to 2.3 million girls and women by the World Health Organization (WHO) and UNICEF. Priests throughout Kenya reportedly are advising their congregations to refuse the vaccine.

*An antigen (from ANTIbody GENerator) is a molecule that induces an immune response in the body.

KCDA spokesman Dr. Muhame Ngare of the Mercy Medical Centre in Nairobi told LifeSiteNews, “We sent six samples from around Kenya to laboratories in South Africa. They tested positive for the HCG* antigen. They were all laced with HCG.”

*HCG is Human Chorionic Gonadotropin, a hormone produced in pregnant women by the placenta, following implantation. In other words, the HCG in the anti-tetanus vaccine causes women to develop antibodies against it. When they do get pregnant, and produce their own version of HCG, their bodies produce antibodies that cause a miscarriage.

Dr. Ngare stated in KCDA’s press release, “This proved right our worst fears; thatthis WHO campaign is not about eradicating neonatal tetanus but a well-coordinated forceful population control mass sterilization exercise using a proven fertility regulating vaccine. This evidence was presented to the Ministry of Health before the third round of immunization but was ignored.”

The Kenyan government insists the vaccine is safe. Health Minister James Macharia even told the BBC, “I would recommend my own daughter and wife to take it because I entirely 100% agree with it and have confidence it has no adverse health effects.”

Dr. Collins Tabu, head of the Health Ministry’s immunization branch, told the Kenyan Nation, that “there is no other additive in the vaccine other than the tetanus antigen.” Tabu said the same vaccine has been used for 30 years in Kenya. Moreover, “there are women who were vaccinated in October 2013 and March this year who are expectant. Therefore we deny that the vaccines are laced with contraceptives.” Newspaper stories also report women getting pregnant after being vaccinated.

Responds Dr. Ngare: “Either we are lying or the government is lying. But ask yourself, ‘What reason do the Catholic doctors have for lying?’ The Catholic Church has been here in Kenya providing health care and vaccinating for 100 years for longer than Kenya has existed as a country.”

The Catholic Church in Kenya maintains an expansive medical system of 54 hospitals, 83 health centers, and 17 medical and nursing schools.

Dr. Ngare points to several things that had alerted doctors in the Church’s medical system to the possibility the anti-tetanus campaign was secretly an anti-fertility campaign:

1. The anti-tetanus vaccination program involves an unprecedented five shots or “jabs” over more than two years, instead of the usual 3 shots over 2 to 3 years. Dr. Ngare says that the only time tetanus vaccine has been given in five doses is when it is used as a carrier in fertility regulating vaccines laced with the pregnancy hormone HCG developed by WHO in 1992. “We knew that the last time this vaccination with five injections has been used was in Mexico in 1993 and Nicaragua and the Philippines in 1994,” said Dr. Ngare. “It didn’t cause miscarriages till three years later,” which is why the counterclaims that women who got the vaccination recently and then got pregnant are meaningless.

2. The vaccine is applied only to women of child-bearing years. The Kenyan government says that the vaccination is targeting women in order to inoculate their children in the womb against tetanus. But Dr. Ngare says, “Usually we give (the anti-tetanus shots to) anyone who comes into the clinic with an open wound, men, women, or children. If this is intended to inoculate children in the womb, why give it to girls starting at 15 years? You cannot get married till you are 18. The usual way to vaccinate children is to wait till they are six weeks old.”

3. The current anti-tetanus vaccination program is being conducted in secrecy, without the usual fanfare of government publicity. Dr. Ngare said,  “They usually bring all the stakeholders together three months before the campaign, like they did with polio a little while ago. And they use staff in all the centres to give out the vaccine.” But with this anti-tetanus campaign, “only a few operatives from the government are allowed to give it out. They come with a police escort. They take it away with them when they are finished. Why not leave it with the local medical staff to administer?”

Brian Clowes of Human Life International in Virginia told LifeSite News that in previous cases in Nicaragua, Mexico, and the Philippines, the UN vaccinators insisted their product was pure until it was shown not to be. Then they claimed the positive tests for HCG were isolated, accidental contaminations in the manufacturing process.

LifeSiteNews has obtained a UN report on an August 1992 meeting at its world headquarters in Geneva of 10 scientists from Australia, Europe, India and the U.S.A and 10 “women’s health advocates” from around the world, to discuss the use of “fertility regulating vaccines.” It describes the “anti-Human Chorionic Gonadotropin vaccine” as the most advanced.

One million Kenyan women and girls have been vaccinated so far with another 1.3 million to go.

Dr. Ngare said it was the Catholic Church’s hope that the government could have resolved the matter quietly by testing the vaccine. “But the government has chosen to be combative,” forcing Kenya’s bishops and Catholic doctors to go public.

WHO’s Kenyan office and several WHO media contacts in Washington, D.C. failed to respond to LifeSiteNews enquiries over a 24-hour period.