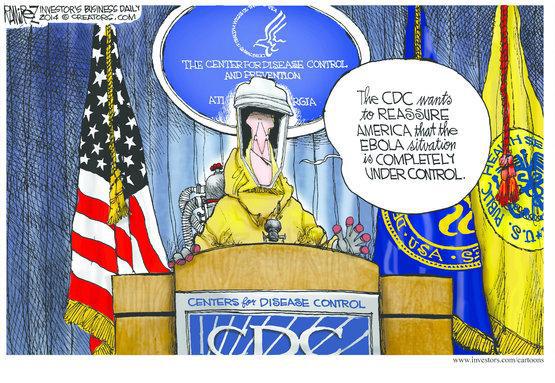 The Centers for Disease Control and Prevention (CDC) made an interesting announcement Friday via a press release:

The Centers for Disease Control and Prevention (CDC) has ordered $2.7 million in personal protective equipment (PPE) to increase Strategic National Stockpile (SNS) supplies to assist U.S. hospitals caring for Ebola patients. Products are being configured into 50 kits that can be rapidly delivered to hospitals. Each kit can provide the PPE needed by clinical teams to manage the care of one Ebola patient for up to five days.

The number of kits is limited, but the CDC said they will “help address short-term PPE needs.” They will be “rapidly delivered” from the SNS as requested to hospitals that have suspected or confirmed Ebola cases.

On October 20, the CDC issued updated guidelines for PPE use while caring for Ebola patients. They say this has caused an increase in demand for proper protective gear:

Since the issuance of the CDC guidance, there has been a sudden increase in demand for PPE. Across the United States, availability for these products varies by product type and model, requested quantity, manufacturer, distributor, and geographic region.

“We are making certain to not disrupt the orders submitted by states and hospitals, but we are building our stocks so that we can assist when needed. Some of these products are not normally used by hospitals for regular patient care,” said Greg Burel, director of CDC’s Division of Strategic National Stockpile.

There are alternatives that can be used in the event certain products are unavailable, and those alternatives are included in CDC’s guidance. CDC continues to coordinate with manufacturers, distributors and health care facilities to monitor the availability of products in the supply chain. No products are being held by manufacturers or distributors specifically for SNS orders, and SNS orders are not being prioritized ahead of orders placed by hospitals. (source)

The CDC isn’t the only agency that is stockpiling protective supplies, as Daisy Luther reported last month:

The National Institute of Health has placed a massive order for protective clothing and supplies that could make it impossible for you to procure your own gear.

And by massive, I mean a year’s supply for employees of facilities across the country, replenished throughout the year no matter what happens, and taking priority over any personal orders.

But don’t worry, the solicitation, dated October 14, says that the PPE (Personal Protection Equipment) is needed because of the danger of working in animal laboratories. This has NOTHING to do with Ebola.

This was brought to Luther’s attention by an alert reader, who commented on The Organic Prepper that his order for 3M N100 masks was not going to be filled:

I tried to order the N100 masks and I received an email yesterday that 3M is placing a national backorder on all of these masks. They said it had to do with “government obligations”. Just wanted to let you know!

Just a few days ago, Paul Joseph Watson of Infowars reported that the CDC is also looking to purchase body bags.

And, last month, Kit Daniels of Infowars revealed that the CDC is only responding to about half of the calls the agency is receiving from doctors who are calling about patients with Ebola-like symptoms.

It sure sounds like the government is expecting Ebola to become a problem in the US, doesn’t it? But there really haven’t been any reports of suspected cases in the news lately. All has been quiet on the Ebola front, so to speak.

Maybe there won’t be more cases of the deadly virus in the US.

Or, maybe something else is going on.

On November 3, WashingtonsBlog posted this brief but revealing blurb titled HERE’S Why Ebola Is No Longer In the News:

The Associated Press and other press outlets have agreed not to report on suspected cases of Ebola in the United States until a positive viral RNA test is completed.

In other words, the mainstream media has agreed not to report on any suspected Ebola cases.

I guess the Ebola czar has been a busy boy, after all … you know, preventing panic and all that.

That’s interesting enough, but it appears that the writer of the linked Forbes piece was blacked out for reporting on a media blackout, because he updated his article with this “correction:”

**CORRECTION: This piece originally and inadvertently suggested that The Associated Press and other news organizations were in agreement “not to report on suspected cases of Ebola in the United States until a positive viral RNA test is completed.” I regret this misinterpretation. In fact, AP is in no agreement with other outlets regarding news coverage. AP’s own position is that it will still report some suspected cases of Ebola if they cause enough disruption, even if there’s no confirmation the person has Ebola.

The AP’s stance is respectable. Ebola-mania has reached fever pitch in the US, and reporting on every single case of a person showing up at a healthcare facility with possible symptoms gets exhausting. Too much alarmism can lead to “boy who cried wolf” syndrome. As Samuel Croxall, a translator of Aesop’s Fables, said, “When we are alarmed with imaginary dangers in respect of the public, till the cry grows quite stale and threadbare, how can it be expected we should know when to guard ourselves against real ones?”

There’s no sense in getting everyone concerned over every POSSIBLE case of Ebola, especially when almost all of them have turned out to false alarms.

But should we trust the government (or the mainstream media, for that matter) to report all confirmed cases of Ebola?

Maybe not, considering the government has lied about pandemics in the past in an effort to avoid mass panic. The handling of The Great Influenza Pandemic of 1918 should be a cautionary tale, as suppression of the truth and censorship of the press only made things worse.

Actions speak louder than words, so how should we interpret the major protective gear purchases and assemblage of Ebola kits by the CDC and other government agencies?

Medical professionals who cared for Thomas Duncan, the first reported Ebola patient treated in the US, said there was “no protocol” in place for handling the deadly virus. The CDC received a lot of backlash for their lack of guidance – backlash that escalated after two nurses in Dallas contracted Ebola.

Obama’s appointment of “Ebola Czar” Ron Klain – who is a doctor of spin, not a doctor of medicine – to handle the response to Ebola in the US isn’t helping increase public confidence either. In fact, it makes one wonder what Klain’s actual role IS (damage control, perhaps?).

So, is the government simply being wise (for once) and preparing for an epidemic just in case Ebola spreads through the US?

Or is there something more sinister going on here?