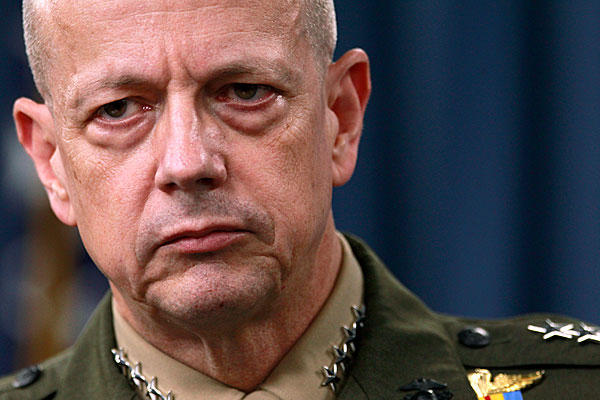 General John Allen (Ret.) was selected as Barack Obama’s envoy for the coalition to combat ISIS. While in Kuwait, Allen echoed Obama’s sentiment that the group is “not Islamic” (despite its leader having a PhD in Islamic studies). In so doing, Allen is being dishonest.

A global effort to counter claims by the Islamic State in Iraq and Syria (ISIS/ISIL) that it is acting in the name of Islam must include a counter-narrative that highlights “our profound respect” for the religion, the administration’s point man in the anti-ISIS coalition said this week.

Retired Marine Corps Gen. John Allen was speaking in Kuwait, where representatives of more than a dozen Islamic and Western met to discuss using public communications to combat ISIS (also known as Da’esh – an acronym for the Arabic rendering of the group’s name, ad-Dawlah al-Islamiyah fil-Iraq wa ash-Sham).

“As we seek to expose Da’esh’s true nature,” Allen told the gathering on Monday, “we must also tell a positive story, one that highlights our respect – our profound respect for Islam’s proud traditions, its rich history, and celebration of scholarship and family and community.”

“We must work with clerics and scholars and teachers and parents to tell the story of how we celebrate Islam, even as we show that Da’esh perverts it.”

It’s patently obvious that Allen is taking orders as the mouthpiece of Obama. The extent to which he actually believes the words coming out of his own mouth notwithstanding, Allen has a history of being somewhat of an apologist for Islam. When he served as Commander of the International Security Assistance Force (ISAF) in 2012, Allen took to YouTube and apologized for the “improper” way U.S. soldiers disposed of “Islamic materials” (Qur’ans) in Afghanistan:

Allen’s predecessor of ISAF was David Petraeus. In 2011, Petraeus also took to YouTube and condemned the burning of a Qur’an by Florida Pastor Terry Jones:

We now know that the Obama administration knew about an affair David Petraeus was having with his biographer Paula Broadwell and – in the words of Charles Krauthammer – “lowered the sword on election day” (2012):