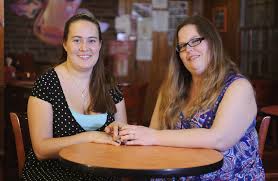 An upstate New York couple filed last month an appeal with the state challenging a fine they incurred for refusing to allow a lesbian couple to hold a wedding ceremony on their farm they claimed was available for events.

Cynthia and Robert Gifford would rent out space on the farm for gatherings and ceremonies, such as weddings or receptions. In a 2012 phone conversation, Cynthia refused to allow Melisa Erwin and her then-fianceé Jennifer McCarthy from getting married on the Giffords’ property, known as Liberty Ridge Farm, in Schaghticoke, New York.

Unbeknownst to Cynthia, McCarthy was recording the phone call, and the young couple later filed a formal complaint with the state Division of Human Rights, according to the New York Post, accusing the Giffords and their business of discrimination.

Last August, an administrative law judge in The Bronx ruled that Liberty Ridge Farm was a “public accommodation’’ and that the Giffords – “devout Christians,” according to the Post – violated state discrimination laws.

The state of New York, which legalized same-sex marriage in 2011, ordered the Giffords to pay fines totaling $13,000 – $10,000 to the state and, to compensate for “mental anguish,” $1,500 each to Erwin and McCarthy, who eventually married elsewhere and now both go by the surname McCarthy

“They were devastated when they heard that Liberty Ridge Farm would not take their business because of who they are,’’ said Mariko Hirose, a New York Civil Liberties Union attorney representing the McCarthys.

The McCarthys refused an interview request from the Post.

The Giffords’ attorney, James Trainor, filed an appeal with the state Appellate Division on their behalf early last month. The Giffords are asking to be recompensated for the money they were ordered to pay. Their legal challenge could become the first case in the state that would place religious freedom rights against marriage-discrimination protections.

“State government should not be forcing people to violate their own religious beliefs, nor should they be forced to make a choice between making a living and violating their own faith.’’

“I think there is an effort under way to change the social order,’’ Trainor added. “One way is by redefining marriage.’’

The Giffords have since opted to stop holding wedding ceremonies – but not receptions – and to use a full-time event planner. Cynthia Gifford claims the couple are not discriminatory or anti-gay.

“We respect and care for everyone!’’ she told the Post. “We had an openly gay man working for us this past season.”

“We’ve had a woman who’s transitioning to be a man. We don’t discriminate against anyone.’’