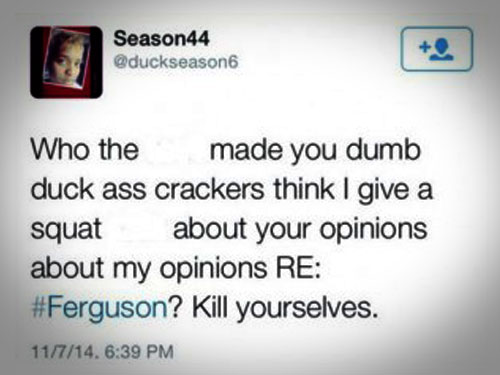 A ninth grade English teacher in a suburb of Dallas has been suspended following a Twitter outburst referring to “dumb duck ass crackers” who should kill themselves for disagreeing with her. Vinita L. Hegwood of Duncanville went off Tweet-style, reportedly in regards to the situation brewing in Ferguson over the grand jury decision in the Michael Brown shooting.

So would you care if your kid’s ninth grade English teacher Tweeted that?

There are two sides to this question.

There’s the side that says people should have free speech, and to limit that in any way is opening the door to trampling the Constitution which ultimately leads to a 1984-esque future filled with censorship and thought crimes.

Then there’s the side that says someone in a position of authority over children like that of a teacher should be of a high enough moral character not to spew racist garbage on her personal Twitter account in her off time.

Here are the uncensored Tweets. 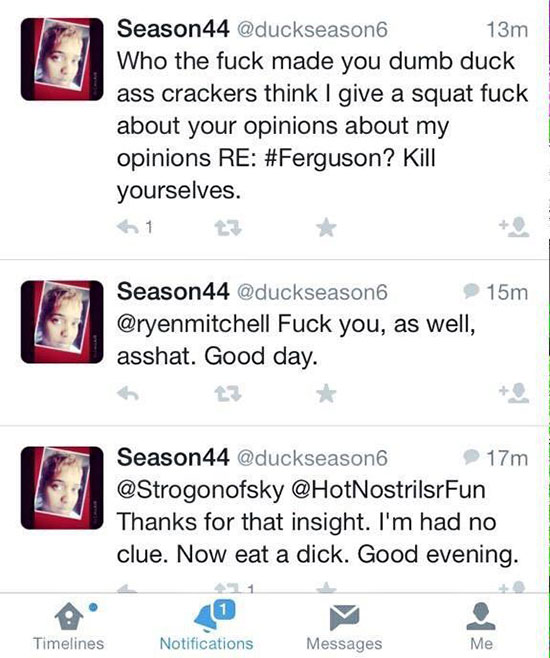 All across the country, government employees are being sent to trainings and told that they are representatives of the state 24 hours a day, seven days a week, and therefore whatever they say in their off time (whether online or not) is fair game as a cause for termination. The idea that people have “free speech” in their off time when online doesn’t really exist in the eyes of most employers anyway, especially when it comes to openly racist comments or violent threats.

But, especially in an age of instant communication, are we moving towards a dystopian future where thought crime is next?

Perhaps it isn’t about the fact that the teacher made those ridiculous, racist statements, but the idea that someone put in charge of educating impressionable young minds didn’t even have the good sense herself not to Tweet that kind of crap in a very public forum online where everybody has access to it.