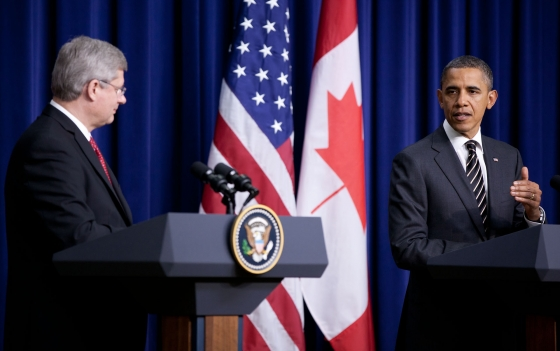 After the midterm elections dealt a devastating blow to the Democrats, it became clear that this was a critical response against Obama and his policies. It appears that the American public is ready to vote the scoundrels out once again, as they have done in every election for as long as anyone can remember. How they keep electing new scoundrels is anyone’s guess, but surely this time will be different?

My sarcasm aside, the midterm election was clearly a populist reaction to President Obama. If he had been running for president that day, he would have lost. All the hope and enthusiasm and bleating crowds of young millennials is a thing of the past. For most Americans that voted for him, he is an embarrassment they would rather forget (much like Bush is for Republicans. Do you see a pattern here?)

However, our Canadian friends seem to have a different opinion on our midterm election. Recently, an open letter from a Canadian citizen in British Columbia has gone viral for some inexplicable reason. I can’t for the life of me figure out why. It reads:

Many of us Canadians are confused by the U.S. midterm elections. Consider, right now in America, corporate profits are at record highs, the country’s adding 200,000 jobs per month, unemployment is below 6%, U.S. gross national product growth is the best of the Organization for Economic Cooperation and Development (OECD) countries.

Do you mean all of those low wage part time jobs that pale in comparison to the jobs that we lost? Or how about the unemployment numbers that are so padded, that we have no idea how many people are employed?

The dollar is at its strongest levels in years, the stock market is near record highs, gasoline prices are falling, there’s no inflation, interest rates are the lowest in 30 years, U.S. oil imports are declining, U.S. oil production is rapidly increasing, the deficit is rapidly declining, and the wealthy are still making astonishing amounts of money.

Where do I start? The stock market is being propped up by what’s left of the Fed’s quantitative easing, and the drop in fuel prices is nothing but a ploy by the United States in its financial war against Russia. And don’t tell me there’s no inflation, when the price of food, utilities, and rent continue to skyrocket.

America is leading the world once again and respected internationally — in sharp contrast to the Bush years. Obama brought soldiers home from Iraq and killed Osama bin Laden.

Don’t make me laugh. Between his attempts to invade Syria, his irresponsible belligerence towards a nuclear armed Russia, and his never ending parade of golf games and extravagant vacations, somehow I doubt he has very much respect around the world. And please don’t start praising him for ending the war in Iraq, when he just sent 1500 troops back into that quagmire.

So, Americans vote for the party that got you into the mess that Obama just dug you out of? This defies reason.

When you are done with Obama, could you send him our way?

Since you’re so confident that you speak for all Canadians, allow me to speak for all Americans when I say, you can have him. There is only one condition though. I’m afraid Obama is package deal. You’ll have to take Jeb Bush and Hillary Clinton with you. I don’t think we can survive another phony election between two Bilderberg shills.