Right now everyone is talking about how one of the Obamacare architects, Jonathan Gruber, said it was the huge political advantage of a lack of transparency in the bill being written combined with the stupidity of the American voter that got the monstrosity that is Obamacare passed.

As reported on The Daily Sheeple, Gruber said quote:

Lack of transparency is a huge political advantage. And basically, call it the stupidity of the American voter or whatever, but basically that was really, really critical to get the thing to pass

Yeah. That happened. Even left-leaning gatekeeper Snopes had to admit it. Why? It’s on videotape.

Well, another of Obamacare’s architects came out and said something perhaps even more disturbing back in September, in case you missed it.

Rahm Emanuel’s brother Ezekiel, former White House Special Adviser on Obamacare and current Director of Clinical Bioethics at the National Institutes of Health and fellow at the Center for American Progress, wrote a whole op-ed in The Atlantic about why he hopes he dies at 75 because… well, that’s the optimal age to die.

In fact, society would be better off “if nature takes its course swiftly and promptly” and we all die at age 75.

(The Atlantic describes itself as a partner site with the Council on Foreign Relations CFR.org site, just by the way.) 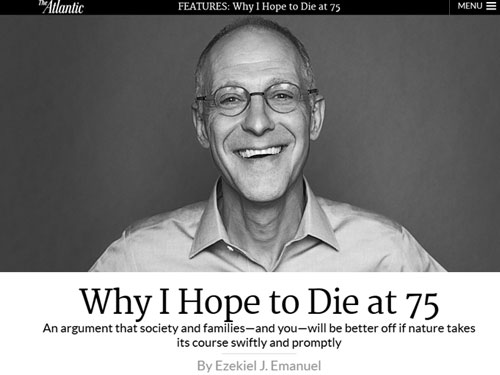 Wow. Look how happy he is about it, too. Yay, timely (or untimely) death!

Here’s a little snippet of what Ezekiel Emanuel had to say in “Why I Hope to Die at 75: An argument that society and families — and you — will be better off if nature takes its course swiftly and promptly” about our optimal age to die:

But here is a simple truth that many of us seem to resist: living too long is also a loss. It renders many of us, if not disabled, then faltering and declining, a state that may not be worse than death but is nonetheless deprived. It robs us of our creativity and ability to contribute to work, society, the world. It transforms how people experience us, relate to us, and, most important, remember us. We are no longer remembered as vibrant and engaged but as feeble, ineffectual, even pathetic.

Sorry. Sad to say, they have lived too long to serve any purpose in the eyes of Emanuel. They are “feeble, ineffectual, even pathetic.” Their age has rendered them automatically unable to contribute anything valuable to society or the world simply by virtue of being alive. Mr. Obamacare bioethics over there says they should both just go die.

In fact, John Nolte at Breitbart referred to the passive-aggressive article, which Emanuel writes supposedly about himself but it really just sounds like he’s making a blanket argument for everyone, as “what decent people would call the mission statement of a death cult” and went on to say it should have been called “Top 15 Reasons No One Over 75 Should Receive Healthcare.”

In addition to the passage above, here are a few other loving statements from one of Obamacare’s architects, which certainly is not in any way (<–that’s sarcasm) a huge argument for prioritizing healthcare and which essentially includes a laundry list of reasons not to give old people medical coverage.

This is basically the essence of a death panel. And yes, he actually said these things:

The guy also goes on and on about how horribly decrepit people get as they get older. To quote Breitbart again, “Emanuel even includes a monstrous but brightly colored graph that is meant to tell anyone over 75 that their ‘last contribution’ to society likely occurred more than a decade ago. Good God.”

Did you know you don’t even really contribute to society past age 65? Emanuel also points out that, “The average age at which Nobel Prize–winning physicists make their discovery is 48.” So? And? How is that proof no one does anything of value later on in their life?

Emanuel went so far as to say, “Even if we aren’t demented, our mental functioning deteriorates as we grow older… It is not just mental slowing. We literally lose our creativity.”

Wow. Literally lose our creativity? All of it? Zero creativity after 75?

Guess that means all of these actors are too old, feeble, robbed of creativity and ability to contribute to work, society and the world to continue to live according to Ezekiel Emanuel:

Robert De Niro is 71, so according to Mr. Emanuel, he’s got four good years left before he should go. Uh oh, Al Pacino turns 75 in April, so…

Yeah. I know how ridiculous that list I just typed is, but it is simply to illustrate a point about the disgusting, heartless bureaucrats running the show in this country.

Ezekiel Emanuel is only 57. We’ll see if he takes his own advice in another 18 years.

Oh, and by the way, how old is David Rockefeller these days? Ninety nine and counting? You don’t say…

In the meantime, people keep debating whether or not Obamacare includes death panels or will lead to death panels in the future. If this Obamacare architect’s op-ed isn’t a raging public service announcement for death panels (complete with a graph and everything!), I’m not sure what is.

They might not openly call it a death panel, but what do you think it means when bureaucrats like this guy argue that life-saving or even life-extending medical procedures like medical screenings or joint replacements are withheld from older folks simply because they are old and it isn’t “cost effective” according to the system?

In the meantime, my dad died a few months ago. All of a sudden, just like that. He was only 63. Do you think I wouldn’t give anything to have him here for another 12 years? More than 12? Do you think I ever once thought of my dad as a creativity-less “burden” who doesn’t contribute to society as he got older? Do you think him being 75, 85 or even 95 would’ve suddenly made me love him so little I stop valuing him as a human being?

What a bunch of evil psychopaths we have running the show. I agree with John Nolte over at Breitbart: These Obamacare death cultists can all go straight to Hell.