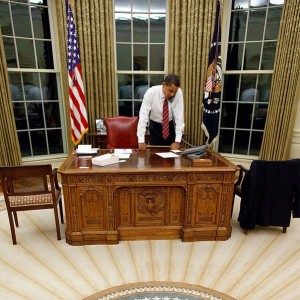 Barack Obama is secretly negotiating the largest international trade agreement in history, and the mainstream media in the United States is almost completely ignoring it.  If this treaty is adopted, it will be the most important step toward a one world economic system that we have ever seen.  The name of this treaty is “the Trans-Pacific Partnership“, and the text of the treaty is so closely guarded that not even members of Congress know what is in it.  Right now, there are 12 countries that are part of the negotiations: the United States, Canada, Australia, Brunei, Chile, Japan, Malaysia, Mexico, New Zealand, Peru, Singapore and Vietnam.  These nations have a combined population of 792 million people and account for an astounding 40 percent of the global economy.  And it is hoped that the EU, China and India will eventually join as well.  This is potentially the most dangerous economic treaty of our lifetimes, and yet there is very little political debate about it in this country.

Even though Congress is not being allowed to see what is in the treaty, Barack Obama wants Congress to give him fast track negotiating authority.  What that means is that Congress would essentially trust Obama to negotiate a good treaty for us.  Congress could vote the treaty up or down, but would not be able to amend or filibuster it.

Of course now the Republicans control both houses of Congress.  If they are foolish enough to blindly give Barack Obama so much power, they should all immediately resign.

And it is critical that people understand that this is not just an economic treaty.  It is basically a gigantic end run around Congress.  Thanks to leaks, we have learned that so many of the things that Obama has deeply wanted for years are in this treaty.  If adopted, this treaty will fundamentally change our laws regarding Internet freedom, healthcare, copyright and patent protection, food safety, environmental standards, civil liberties and so much more.  This treaty includes many of the rules that alarmed Internet activists so much when SOPA was being debated, it would essentially ban all “Buy American” laws, it would give Wall Street banks much more freedom to trade risky derivatives and it would force even more domestic manufacturing offshore.

In other words, it is the treaty from hell.

In addition to imposing Obama’s vision for the world on 40 percent of the global population, it is also being described as a “Christmas wish-list for major corporations”.  Of the 29 chapters in the treaty, only five of them actually deal with economic issues.  The rest of the treaty deals with a whole host of other issues of great importance to the global elite.

• financial deregulation (e.g., more power and privileges to the bankers and financiers)

• public access to essential services may be restricted due to investment rules (e.g., water, electricity, and gas)

Why can’t we get this type of reporting in the United States?

And if this treaty is ultimately approved by Congress, we will essentially be stuck with it forever.

This treaty is written in such a way that the United States will be permanently bound by all of the provisions and will never be able to alter them unless all of the other countries agree.

Are you starting to understand why this treaty is so dangerous?

This treaty is the key to Obama’s “legacy”.  He wants to impose his will upon 40 percent of the global population in a way that will never be able to be overturned.

Of course Obama is touting this treaty as the path to economic recovery.  He promises that it will greatly increase global trade, decrease tariffs and create more jobs for American workers.

But instead, it would be a major step toward destroying what is left of the U.S. economy.

Over the past several decades, every time a major trade agreement has been signed we have seen even more good jobs leave the United States.

And it doesn’t take a genius to figure out why this is happening.  If corporations can move jobs to the other side of the planet to nations where it is legal to pay slave labor wages, they will make larger profits.

Just think about it.  If you were running a corporation and you had the choice of paying workers ten dollars an hour or one dollar an hour, which would you choose?

Plus there are so many other costs, taxes and paperwork hassles when you deal with American workers.  For example, big corporations will not have to provide Obamacare for their foreign workers.  That alone will represent a huge savings.

Any basic course in economics will teach you that labor flows from markets where labor costs are high to markets where labor costs are lower.  And at this point it costs less to make almost everything overseas.  As a result, we have already lost millions upon millions of good jobs, and countless small and mid-size U.S. companies have been forced to shut down because they cannot compete with foreign manufacturers.

Later this month, consumers will flock to retail stores for “Black Friday” deals.  But if you look carefully at those products, you will find that almost all of them are made overseas.  We buy far, far more from the rest of the world than they buy from us, and that is a recipe fornational economic suicide.

We consume far more wealth that we produce, and anyone with half a brain can see that is not sustainable in the long run.  The only way that we have been able to maintain our high standard of living is by going into insane amounts of debt.  We are currently living in the largest debt bubble in the history of the planet, and at some point the party is going to end.

Please share this article with as many people as you can.  We need to inform people about what Obama is trying to do.

If Obama is successful in ramming this secret treaty through, it is going to do incalculable damage to what is left of the once great U.S. economy.