Can you say “revenue generation”? No, I’m sorry, this is “catching dangerous criminals” (by first creating a dangerous situation so you can predictably label someone a criminal first).

Apparently the profession of police officer in America now amounts to little more than, well… What exactly is the word for this? 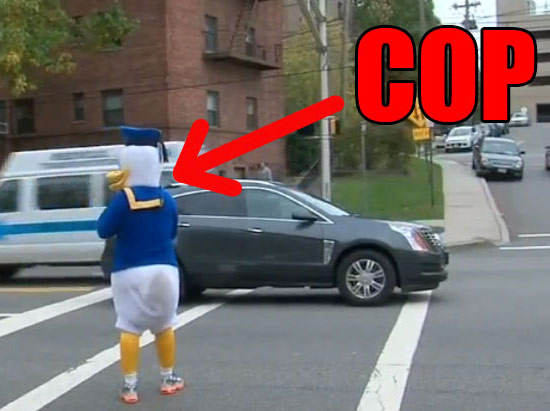 Via The Free Thought Project:

Residents of a New Jersey town are disputing a recent trap that police set up for drivers this past Halloween. Last week, an undercover officer was dressed in a giant Donald Duck costume and paced back and forth on the sidewalk and street on a busy road.

Officers would then pull over drivers who failed to yield for the duck, and hit them with $230 traffic tickets. Police issued a whopping 130 tickets that day for a total take of $29,900.00.

It’s like the cops all got together and said, “We really need another way of ripping off the American people we are supposed to be serving and protecting. Gee, I know! Hey Louie, you still have that creepy Donald Duck costume lying around?”

How is this “fighting crime”? An obnoxious guy dresses up as a giant duck and crosses the street over and over and over? If anything, that’s putting himself and anyone driving in that area in danger just to rip people off, which would be the opposite of “protecting” by definition.

Do you think they teach people in those defensive driving classes to be on the lookout for a grown man dressed as a duck who may or may not be crossing the street several hundred times and basically working out in the crosswalk?

Wasn’t there any other crime or anything of value going on in Fort Lee, New Jersey that day for the cops to do besides set people up to be ripped off? Or were they just that hard up for the cash? This sounds more like a mob tactic to shakedown town residents than something a respectable officer of the law should be wasting his time on.

Sadly, these traps are not only not new, they are the latest craze in law enforcement revenue generation.

The last time I wrote about this back in July, the Somerville Police Department represented in the video below wasn’t even imaginative enough to give their officer a giant duck costume to make their point. It was just some guy nervously padding back and forth on the crosswalk.

As I said back then:

Where’s the public education lesson here about crosswalk safety? Raising awareness to help pedestrians and drivers co-exist? There isn’t, because what you just watched in that video isn’t about that. Yes, drivers should stop for crosswalks, but if this intersection is really that busy and that dangerous for people to cross, they should put in a traffic light…not that most pedestrians cross the same street back-and-forth repeatedly for an hour in the first place…

And in that scenario, the responding cop who was raring to give out tickets is seen blowing through that intersection at top speed — the exact thing they are giving out tickets for! Good thing there weren’t any pedestrians there.

If the police need to generate revenue that badly, why not have a nice bake sale and sell cookies like all halfway respectable organizations?

This is yet another shining example of the American police state in all its pathetic hilarity. Taxpayer funding is going to what? Protecting the taxpayers? No. Finding underhanded ways to take more of their funds. It should be called “taxpayer revenue generating.”

Throw this on the pile of sleazy, underhanded police state tactics like Rahm Emanuel’s administration making all of Chicago’s yellow lights just 0.1 second shorter just to rake in an extra $8 million in new tickets; the fact that Keene, New Hampshire is suing a group of activists for putting change in people’s parking meters because of the lost revenue generated by giving out parking tickets; and the cops in Waldo, Florida who finally outed their sheriff for enforcing illegal ticket quotas.

A retired police sergeant of 14 years wrote, “I am so annoyed at what is happening these days, in what I call ‘indiscriminate revenue gathering’ It is absolutely disgusting. The government and the Police Force need to hang their heads in shame.”

He included a list of basic legal steps drivers can take to beat a ticket, which he says if even 10% of all ticketed drivers followed, would crash the whole system.