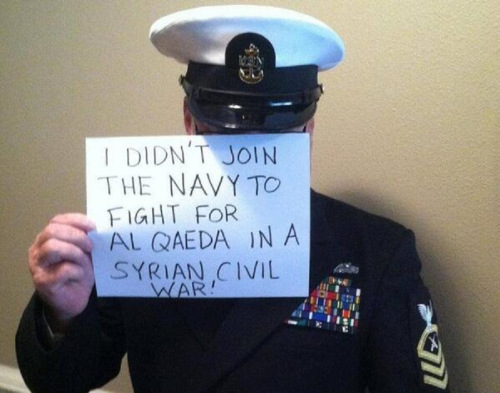 Anyone who has followed the real story line in Syria knew this was coming. Barack Obama wants Bashar al-Assad gone and has wanted him gone since long before most of us knew who ISIS/IS/ISIL was. Now CNN is reporting that the administration doesn’t feel that ISIS can be defeated if Assad remains in power. Gee that’s a shock!

President Barack Obama has asked his national security team for another review of the U.S. policy toward Syria after realizing that ISIS may not be defeated without a political transition in Syria and the removal of President Bashar al-Assad, senior U.S. officials and diplomats tell CNN.

The review is a tacit admission that the initial strategy of trying to confront ISIS first in Iraq and then take the group’s fighters on in Syria, without also focusing on the removal of al-Assad, was a miscalculation.

So before we can defeat the enemy we must first become their ally and help to defeat their enemy. Isn’t that like turning on our own ally? There is no common sense in this administration or, for that matter, a military command that follows it.

Americans are so thirsty for Islamic State blood that they will surely support this. But what will they feel like after Assad is removed and ISIS is not defeated?

In a related story, the Islamic State and Al Qaeda have seemingly kissed and made up. They have decided to stop fighting each other and focus on fighting Assad’s forces:

Militant leaders from the Islamic State group and al-Qaida gathered at a farm house in northern Syria last week and agreed on a plan to stop fighting each other and work together against their opponents, a high-level Syrian opposition official and a rebel commander have told The Associated Press.

Such an accord could present new difficulties for Washington’s strategy against the IS group. While warplanes from a U.S.-led coalition strike militants from the air, the Obama administration has counted on arming “moderate” rebel factions to push them back on the ground. Those rebels, already considered relatively weak and disorganized, would face far stronger opposition if the two heavy-hitting militant groups now are working together.

Using CNN and the Associated Press as sources is not my favorite thing to do. However, whatever Obama’s mouthpieces report will be the official position of the administration, you can rest assured of that. Whether it is truth is not entirely relevant. This will be the truth for most Americans who are seemingly incapable of thinking for themselves.

Speaking of thinking for themselves…

Two of our enemies are now allies and if Obama intends to go after Assad then I suppose that makes ISIS and Al Qaeda our allies as well. Ironic, isn’t it?

Does anyone even remember that 14 months ago our soldiers were in open rebellion because they refused to fight for the interests of Al Qaeda?

Even if you don’t remember, can you blame them?

Here are a few pics to refresh your memory: 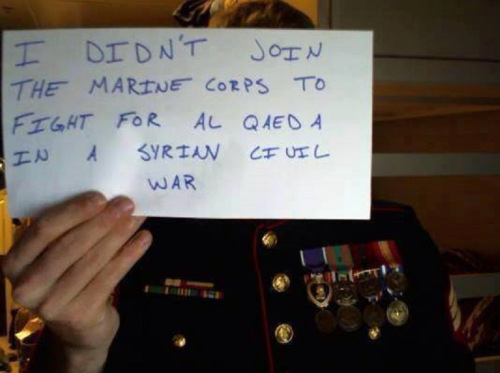 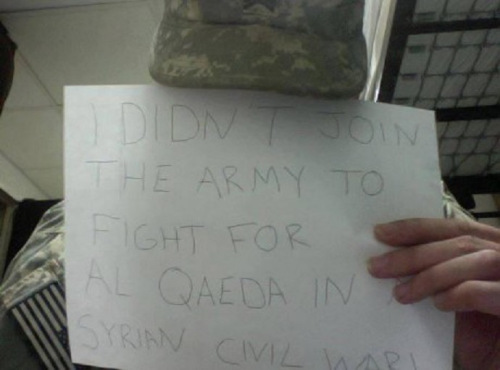 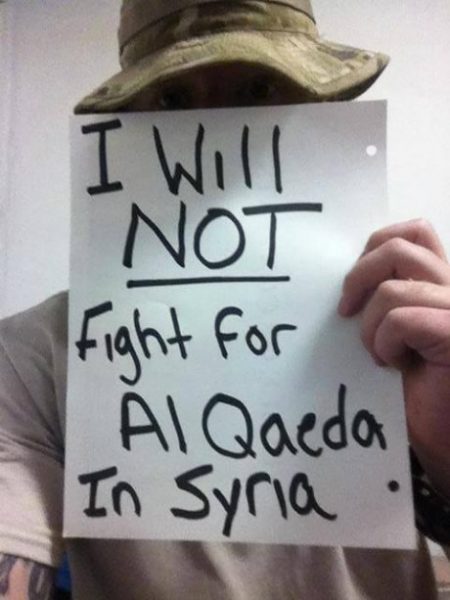 Obama says that we can’t defeat ISIS without first removing Assad. That means we intend to give ISIS and Al Qaeda what they want. (Clue: An Ex CIA Employee recently revealed that Obama is a radical Islamic enemy of America)

The American people hate ISIS and Al Qaeda so much that they will go along with anything if they think that these terrorist networks will be eliminated.

And despite what America’s finest might feel, America is perfectly willing to put boots on the ground to accomplish this. RT reports that the Pentagon addressed Congress yesterday and hinted that we may officially put those boots on the ground after all:

America’s top defense officials updated Congress on the threat posed by the so-called Islamic State group on Thursday and said that putting boots on the ground in Iraq or Syria remains a possibility.

As the United States military continues to train and equip Iraqi forces in hopes that locals will degrade and dismantle the group also known as ISIS, or ISIL, US Secretary of Defense Chuck Hagel told Congress this week that American troops may have to assume a new role to expedite the anti-extremist campaign.

Answering to whether he’d recommend to President Barack Obama that American troops augment their current mission of airstrikes against ISIL with boots on the ground, Hagel told a House Armed Services committee that remains an option.

How can the American people not understand that they have been played like a fiddle?

14 months after our soldiers stood tall and told Obama that they would not fight for the interests of Al Qaeda, the American people have become Obama’s greatest ally.

When did so many Americans decide to jump over to Obama’s side?

This nation is demanding that ISIS be stopped and we are willing to order our soldiers to ignore their own conscience if that is what it takes. Right and wrong no longer matter.

We should all be ashamed. Our government funded and trained ISIS and now we are playing right into their hands, like sheep on the way to slaughter.

If this makes you mad, it probably should.

ISIS is a problem, and I am not about to defend Islamists, but if people won’t first deal with the real enemies in Washington D.C., and it’s not just Obama, then there will be a new Al Qaeda, or a new ISIS, lying in wait. It doesn’t matter if we defeat ISIS. If we do, our government will simply create a new and improved ISIS.

Plans are already being formulated.

You can count on that.

By the way… The problem has never been Al Qaeda or ISIS. The problem is Islam. Our government may create, fund, arm, or train terrorist networks that advance an agenda, but it surely isn’t hard to populate those networks with willing volunteers.