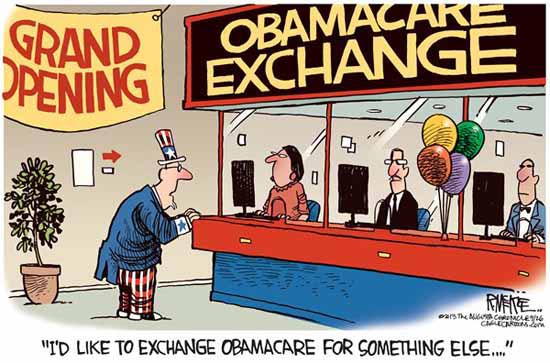 The Obamacare website homepage has an exciting announcement for us!

Here’s what it says:

See plans & prices for 2015!
Starting November 15, you can enroll in an affordable health plan that works for you

How about…NO. I’d rather not, thanks.

Like Daisy Luther of The Organic Prepper, I am NOT going to comply with Obamacare. I’ve said that from the day I first heard about this extortion plan.

The mainstream media is alerting us that UH OH!, the second enrollment season is HERE and if you don’t comply like a good citizen, you’ll be facing even BIGGER penalties this time around!

Americans will see their bank accounts shrink if they don’t sign up for Obamacare in its second enrollment season.

Uninsured Americans who decide not to enroll will face a penalty of $325 per person, more than tripling the $95 penalty those who did not enroll had to pay the first time around.

Children under the age of 18 will be fined $162.50. The maximum amount an uninsured family will be penalized is $975 under the flat-rate method.

The financial penalty for skipping out on health coverage will more than triple to $325 per person in 2015, or 2 percent of income, depending on whichever is higher (emphasis mine).

Note that the maximum amount a family would be penalized under the FLAT RATE method is $975. I don’t know about you, but I think that’s a LOT of money, especially in this terrible economy. And that flat rate penalty is mostly going to affect lower-income and middle income families. Some middle class families make too much money to qualify for a subsidy, so they will be stuck with a hefty penalty if they can’t buy insurance.

I thought the purpose of the ACA was to HELP lower income families?

The chief aim of the law is to expand health insurance coverage and offer financial assistance to families that can’t afford it. Since most states declined to set up their own health insurance exchanges, the federal government was left to set them up instead. As a result, more than two-thirds of the people who had signed up for health insurance of April 30 purchased their insurance from a federal exchange. Among all enrollees, 85 percent received subsidies to help pay for it — that’s almost 5 million people. The average value of these tax credits was $264 a month, which represents a discount off the sticker price of more than three-quarters.

Senior analyst Laura Adams of InsuranceQuotes.com told CBS “The penalty is meant to incentivize people to get coverage. This year, I think a lot of people are going to be in for a shock.”

Is it meant to incentivize us, or to extort us?

I think this definition of extortion from FindLaw gives us our answer:

Most states define extortion as the gaining of property or money by almost any kind of force, or threat of 1) violence, 2) property damage, 3) harm to reputation, or 4) unfavorable government action.

To add insult to injury, the prices for plans are going up – WAY up:

It’s not only the uninsured who will be facing higher costs. Many health-care plans are also charging more, with Investor’s Business Daily finding that a 27-year-old earning 250 percent of the poverty rate will pay an average of 7 percent more for the lowest-cost bronze plan, based on an analysis of rates in the largest city in 34 states. The lowest-cost silver plan will rise an average of 9 percent, while the lowest-priced catastrophic policy will climb 18 percent, the analysis found.

Now, for even more shocking numbers…

The financial site NerdWallet ran some numbers to see how much a lifetime of Obamacare penalties would cost.

The title of the article says it all.

Study: A Lifetime of Obamacare Penalties Can Total Six Figures

Here are some key points from the article:

NerdWallet estimated the cost of a lifetime of penalties – that is, what penalties might cost for someone who never purchases insurance. Our calculations predict that individuals will pay a minimum of $36,556, and families of four a minimum of $109,668.

To estimate the “lifetime” sum of tax penalties, we used two methods:

Higher-income uninsured individuals and families will pay much more for the tax penalty.

For a startling, in-depth chart that shows estimated penalties per year, and for information on how NerdWallet calculated their projections, please see the full article here.

The 13th and 14th exemptions are listed on the hardship exemption application and read as follows:

13.) You received a notice saying that your current health insurance plan is being cancelled, and you consider the other plans available unaffordable.

Documentation required as proof: Copy of notice of cancellation

14.) You experienced another hardship in obtaining health insurance.

That hardship exemption form can be found on Healthcare.gov.

Here’s what I said about the exemption form back in March:

For the 14th exemption, what kind of “hardship” do they mean?  That’s very vague wording. And “please submit documentation if possible“? What if it isn’t possible? What if you don’t have “documentation”, and Obamacare itself is simply a hardship for you? Does that mean you are exempt from the  tax penalty?

I also reported on what some politicians said about the exemptions:

“Quietly, without any fanfare, there’s a real question whether the White House has just abandoned the individual mandate, the heart of Obamacare itself.”

House Majority Leader Eric Cantor, R-Va., accused the Obama administration of trying “to sneak through a unilateral change to Obamacare which essentially allows anyone who has experienced a hardship in obtaining health insurance to opt out of the individual mandate tax without requiring documentation.”

And then, there’s the whole IRS problem.

Last week, IRS Commissioner John Koskinen warned at the American Institute of Certified Public Accountants (AICPA) National Tax Conference in Washington, DC that the 2015 tax filing season “will be one of the most complicated filing seasons we’ve ever had.”

The IRS’s budget has been severely cut by Congress (hey, they got something right for once!). And, now the agency has increased responsibilities because of Obamacare.

Is anyone surprised? A lot of Americans saw this coming. We predicted that the IRS would not be able to handle administering Obamacare. The agency can’t even handle its regular tasks, or finding lost emails.

On that note, I find it funny that Obamacare architect Jonathan Gruber called American voters “stupid.” He sort of contradicted himself, didn’t he? He called us stupid right after he admitted that a “lack of transparency” helped pass the ACA. He also bragged about knowing more about the ACA than any other economist, but…then he told a blatant lie about the state exchanges and subsidy eligibility. Both of his flubs were caught on camera.

Here are some disturbing points from that article:

The president has requested that the IRS receive nearly half a billion dollars in fiscal year 2015 to implement Obamacare. In contrast, genuine, consumer-based reform would have improved the country’s health care system without increasing the IRS’s power, complicating the tax code, and raising compliance costs for taxpayers.

Obamacare dramatically increased the size and power of the IRS – an agency shown over the past year to be untrustworthy and partisan – and its role in the American health care system. For starters, over the next decade, Obamacare hiked taxes by more than $1 trillion, through more than 20 tax increases. The IRS faces enormous challenges in implementing these new taxes. For example, last month the Treasury Department’s inspector general for tax administration found that IRS was unable to properly collect the medical device tax.

Taxpayers who claim one of the 19 exemptions from the individual mandate must file Form 8965 with the IRS. As many as 23 million Americans may have to file a Form 8965 for the 2014 filing season. The form has 21 boxes for entries for single filers and 78 boxes for entries for married filers with two dependents.Instructions for Form 8965 take 12 pages and contain five worksheets.

Oh, and guess what? Most of the people who receive subsidies to buy insurance through the exchanges get them in the form of a check sent from the Treasury to their insurance company every month. Those monthly subsidies were based on estimates of what the recipients would earn during the year. So, at tax time, those taxpayers will have to reconcile the amount paid out with how much SHOULD have been paid. In other words, if the Treasury sent too much money to the insurance company on a person’s behalf, the IRS is going to go after the TAXPAYER for any overpayment. This is going to happen even though the TREASURY sent too much to the insurance companies!

They are understaffed and under budgeted and will NOT be able to handle administering Obamacare.

The agency is plagued with scandals.

For all of these reasons, I will be filing an exemption and opting out of Obamacare. Instead of participating in the racket that Big Government-enforced insurance-based “healthcare” has become, I will use the Direct Primary Care option. For more on how that system works, please see Money Talks, Obamacare Walks: Some Doctors to Accept Cash Only, the Direct Primary Care Coalition website, and Direct Primary Care: An Innovative Alternative to Conventional Health Insurance.