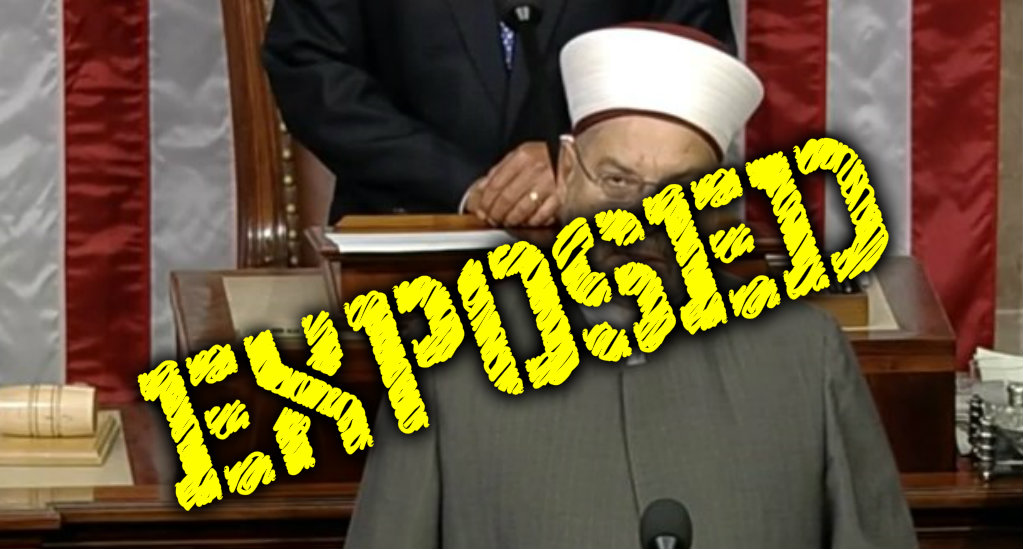 To all who get excited at the Republican victory, watch your idol-kings and your high-priests in their cathedrals, all burn incense to Ba’al, they all bow at the sound of the name of Allah, they all sleep with Islam, the harlot of Arabia. All your choicest American fatlings bow in lust like prostitutes:

With newly re-elected Speaker of the House John Boehner presiding AND BOWING HIS HEAD, the Imam for the Islamic Center of Central Jersey praised Islam’s Allah from the House floor as the God who reigns supreme. Here is the shocking video of Imam Hamad Chebli delivering the Islamic prayer; Boehner can be seen behind him:

Chebli didn’t just appear at the House floor; he also delivered Islamic prayers at the National Cathedral, which was prepared for Muslim prayers with rugs.

Numerous speakers, including Cathedral officials and local Muslim leaders, echoed Rasool’s message [Muhammad’s Message] about the urgent need for religious understanding and collaboration. Most made pointed references to the symbolism of the majestic Christian building, where they had gathered to pray and commune.

Rev. Gary Hall, dean of the Cathedral, spoke of St. Benedict, whom he said believed equally in the importance of prayer and hospitality. Marveling at the sounds of Arabic prayers, which he called “a beautiful sacred language in a beautiful sacred space,” Hall said he hoped the service would serve as a beginning for future efforts to work together for good.

Rashid Makhdoom, a retired engineer from Potomac, said he believes the message and symbolism of the event would “reverberate throughout the world. It should be a lesson for Muslims everywhere that we and Christians are all one,” he said.

But that wasn’t all true. Fortunately, there appeared a “Deborah,” “Jael,” and a “Judith,” in that one Christian woman made a scene when it became obvious that an act of conquest and harlotry was taking place, she screamed out:

“Early in his studies, a teacher named Hassan Khaled chose Chebli to serve at a neighboring mosque. Nearly four decades later, Chebli laughs as he recalls the puzzled expression of the mosques members when a lanky boy in glasses came to lead their prayers …[Hassan] Khaled, his mentor, was chosen Grand Mufti of Lebanon, the nation’s foremost Islamic legal scholar in the Sunni Muslim sect.”

Chebli’s mentor, Khaled, who was the Mufti of Lebanon was “martyred” after a bomb was set up which killed him and others. His father went the same way “martyred” by a bombing. Have a look at Khaled, the fiery revolutionist exhorting a crowd to chant, ‘Allahu Akbar’:

The speech tone in Arabic is always different than what you find on the House Floor in English, of course, but we cannot attribute the man to be like his mentor, this would be ‘guilt by association.’

Khaled, the man’s mentor is even featured prominently on the official Muslim Brotherhood website.

And in the same footsteps as Khaled, Chelbi also traveled to Egypt to study at Al-Azhar University, the world’s oldest university and center for Brotherhood jurisprudence. It was during this time that Chelbi’s mentor Khaled was chosen as the nation’s foremost Islamic legal scholar in the Sunni Muslim sect.

Prior to Khaled’s fallout with the PLO’s Yasser Arafat, he was a champion and supporter of Palestinian terrorism against Israel to sending terrorist recruits from Lebanon.

The selection of Chelbi also appears to have significance relative to the U.S. policy in Syria. Both his mentor Khaled – and Khaled’s father – were killed by the Syrian regime. As such, Chelbi has an axe to grind when it comes to Bashar al-Assad. With news that the Obama administration is actually considering a policy based on an absurd premise that the best way to defeat ISIS is to remove Assad from power, Chelbi’s appearance at locations of national significance seem to coincide with this potential shift in U.S. policy.

Despite western portrayals of Chelbi as a moderate, he absolutely is not.

When it comes to Muslim prayers being delivered on the House floor or at the National Cathedral, unfortunately, this is not new. The precedent was set by Boehner’s predecessor – Speaker Dennis Hastert – less than one year prior to 9/11. As for the National Cathedral, none other than President George W. Bush shared a podium with Muzammil Siddiqi, then president of the Islamic Society of North America (ISNA).

First up, on February 7, 2001, Chairman of the Dar al-Hijrah mosque Bassam Estwani delivered a prayer on the floor of the House as well. As the chairman of Dar al-Hijrah, Estwani represented perhaps the most notorious mosque on American soil. It was visited by three of the 9/11 hijackers and was home to Anwar al-Awlaki, the inspiration for the Fort Hood shooter. Estwani was the chairman of the mosque at that time:

As for the National Cathedral, on September 14, 2001, just three days after the 9/11 attacks, President George W. Bush stood shoulder to shoulder with Siddiqi, the leader of the largest Muslim Brotherhood group in the U.S. and prayed with him.

The Religious Freedom Coalition’s William Murray was in attendance at the Cathedral that day. Here is part of what he wrote about that day in his diary:

As the service closed I felt the chill of the presence of the awesome power of God. I was clearly reminded of the very first of the Ten Commandments, THOU SHALT HAVE NO OTHER GODS BEFORE ME (Exodus 20:3). The National Cathedral had been defiled by prayers to a pagan moon god, Allah. Our Christian President had bowed his head to prayers offered to other gods, prayers that may have been for those who would destroy our nation and enslave our children to an alien religion. At that moment the hand of protection of the true God was removed from our nation.

Since the Jihad attack on the United States on September 11th, the President has surrounded himself with and sought advice from radical Islamic leaders who have openly called for the violent overthrow of the government of the United States. In addition, the President has invited six of the seven Islamic nations known to sponsor terror into his “coalition against terror.”

By late Friday it became apparent to me that our nation was in fact not going to fight a war on terrorism, but rather follow the same old track of “punishing those who actually committed the crime.” This was not a “crime;” it was an act of war.

When it comes to New Jersey, that state’s Governor Chris Christie also has some incredibly disturbing alliances with questionable Muslim figures, as Shoebat.com has reported.

*Ben Barrack contributed to this article.