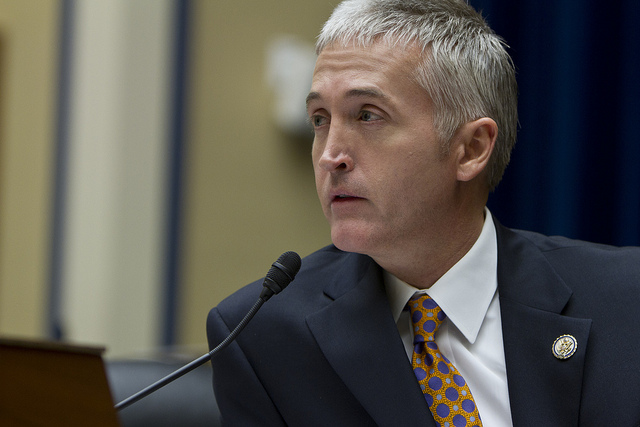 Republicans hold a majority in the House and after the mid-term elections, now hold a majority in the Senate. That being said, the question that still dogs many in America is, “Will Articles of Impeachment be filed against Barack Hussein Obama should he issue amnesty to illegal aliens via executive order?” According to Republican Representative Trey Gowdy, there will be no impeachment of the unconstitutional usurper Barack Hussein Obama. Gowdy rationalized the foregoing of impeachment with one statement: “Have you met Joe Biden?”

The Constitution of the United States of America establishes, under Article I, Section 1, that “all legislative powers herein granted be vested in the Congress of the United States, which shall consists of a Senate and House of Representatives.” Legislative power means the ability to make or enact a law or laws. One of the legislative powers granted to Congress is “to establish a uniform Rule of Naturalization, and uniform laws on the subject of Bankruptcies throughout the United States.” The laws pertaining to the Rule of Naturalization are the immigration and naturalization laws governing the influx of individuals into the nation and qualifying for citizenship. This power is vested in Congress, not the executive; and, any executive action to disregard established constitutional law, enact any executive action to change established constitutional law or enact any executive action to establish law thereby circumventing the legislative branch is usurpation of power outside the constitutional authority of the executive branch.

Despite the many transgressions and “misdemeanors” performed by Obama, Gowdy’s rationale for not impeaching rests solely on “have you met Joe Biden?” What has that got to do with price of eggs in China? The Constitution of our great nation does not disqualify impeachment of a president based on the “quality” of the vice president. Gowdy claims that the only ones talking impeachment are “pundits and commentators” with a hint that allies of the president are taunting for impeachment. In his eyes that might be true; however, those who hold to the founding principles of this nation and uphold the Constitution as the supreme law of the land are calling for the law to be enforced, which, in this case is impeachment.

One question that Gowdy needs to answer truthfully is “Do you believe the Constitution of the United States of America to be the supreme law of the land?”

According to Gowdy, impeachment is a “punishment” and not a remedy; however, the founding fathers might disagree with that statement. Impeachment only removes the offender from the office in order to prevent the usurper from engaging in further deleterious acts against the country with the possibility of overturning acts of usurpation and unconstitutionality. Once the individual has been found deserving of impeachment then convicted on Articles of Impeachment, the individual is still subject to trial and, if found guilty, punishment under the law.

Article I, Section 3, paragraph 7 of the Constitution of the United States of America states:

Judgment in cases of impeachment shall not extend further than to removal from office, and disqualification to hold and enjoy any office of honor, trust, or profit under the United States: but the party convicted shall nevertheless be liable and subject to indictment, trial, judgment and punishment, according to law.

Where does Gowdy get the idea that impeachment is punishment? An individual may be removed from office as a remedy for “high crimes and misdemeanors” but still not suffer punishment if found not guilty in a trial by jury. Maybe Mr. Gowdy needs to read “Impeachment: All you need to know (and you do need to know it)” by Publius Huldah.

Impeachment is not the only way to remove a sitting president. The 25th Amendment provides for the removal of a president on the inability to do the job, disability, resignation, and natural death. Removal from office does not appear to be considered “punishment” as outlined in the Constitution, but a remedy for an ineffective, usurping, unconstitutionally performing, unwilling, or disabled president. Should the successor perform in the same manner as the impeached president, that individual would then be subject to the same proceedings, making the comment “have you met Joe Biden” come across as an excuse and flippant remark.

So, if impeachment is not on the agenda to reign in an out of control executive, why has not one individual in Congress examined removal under the 25th amendment? The possibility of extreme personality disorder along with mythomania alone bring into question the ability of Obama to perform his duties as president.

It doesn’t matter who holds the successor office. The quality of the successor does not preclude one from following the law, as the successor is also subject to the law. Granted, it would be unprecedented to have a successor impeached; however, if that successor engages in “high crimes and misdemeanors,” the law is applicable to that individual as well.

By discounting the law and refusing to follow it, the message is sent to those in violation that their actions have no consequences. It further sets a precedent for future occupiers of the Oval Office to engage, unrestrained, in actions detrimental to the country, outside the Constitution and contrary to the established government hierarchy – by the people, for the people, and of the people. Following the law sends a message to anyone who seeks to occupy the Oval Office that violations of the law, unconstitutional acts, and usurpations will not be tolerated by the body charged with legislation or the citizens of this nation.

In the interest of fairness, one could say that impeachment was both a remedy and a punishment – the individual is stripped of holding the office and prevented from doing further harm to the country. However, the individual would not be sanctioned to an adversarial action should no indictment of criminal charges occur. Impeachment more readily amounts to being fired for poor job performance.

During the 1787 Constitutional Convention that brought us our Constitution, Benjamin Franklin reminded the delegation of the first public magistrate to be brought to justice for being obnoxious – Julius Caesar. Caesar was assassinated as a remedy and/or punishment for his transgressions. As Franklin so aptly reminded the convention, assassination was the alternative used in history for such obnoxiousness. He believed impeachment to be a better remedy/punishment for transgression as it afforded the transgressor the opportunity to vindicate his character whereas assassination deprived the individual of that opportunity as well as his life.

Our Constitutional “remedy” for an out of control executive has proven American exceptionalism in that impeachment or removal from office replaced the historical remedy for removing top leaders from government. It was the first time the idea of removing a leader without killing them entered the world stage. It was, however, appropriate based on the framing of our nation.

With our so-called governing body removing impeachment as a remedy and classifying it as a punishment, these Congressional members need to bring forth better rationale than “I don’t agree with impeachment” or “have you met Joe Biden” for not following the supreme law of the land. These “educated” individuals need to explain to every American their plan of action to control an out of control executive. If not impeachment, what – a lawsuit? Lawsuits are not provided for in the Constitution as a remedy for an out of control executive. Passage of another law to “force” the president to follow the law? Passing another law is just passing a law he will not follow and will brazenly violate. So, Mr. Gowdy, members of Congress, what say you?

As a lawyer, Mr. Gowdy should be able to explain this inequity of the law and explain why citizens are held to the law while law-makers and executives are not. Hopefully, he has something better than “have you met Joe Biden?”