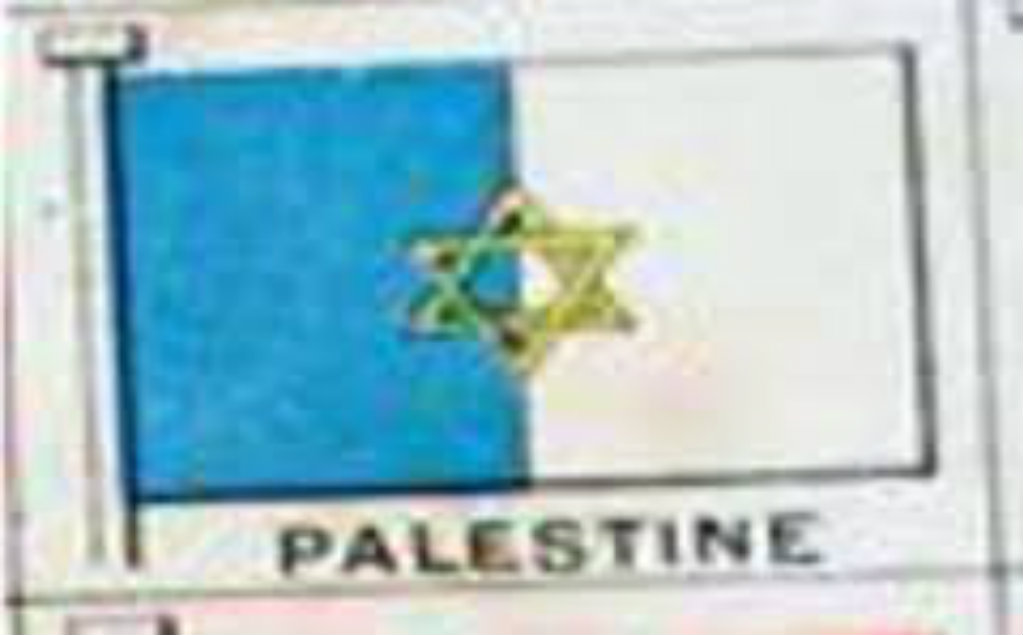 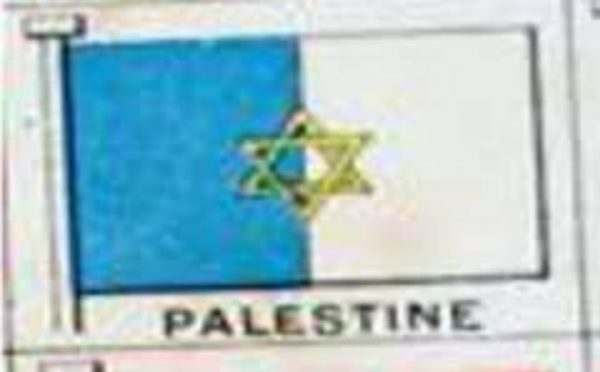 Above photo: The actual flag of Palestine — 1939. Further proof of the lie (as if we needed any more) of the vicious historical revisionism by the Muslim world to erase the Jewish State and create a mythical Islamic narrative surrounding five thousand years of Jewish history.

The fact is that Palestine is Israel – the Jewish homeland.

After the Romans conquered the Jews in the Jewish-Roman wars, the Romans renamed Israel after the Jews’ worst enemies — the Philistines — in order to further humiliate them.

The term was first used to denote an official province in c.135 CE, when the Roman authorities, following the suppression of the [Jewish] Bar Kokhba Revolt, combined Iudaea Province with Galilee and the Paralia to form “Syria Palaestina”. (source)

It was a Roman Emperor who first coined the name.

In AD 135, the Emperor Hadrian blotted out the name “Provincia Judea” and renamed it “Provincia Syria Palaestina”. This was the Latin version of the Greek name and soon became a name to be used as an administrative unit. This name was shortened to Palaestina and the name “Palestine” was derived from it as a modern and anglicized version. (more here)

In other words, it was always Jewish.

Leading up to Israel’s independence in 1948, it was common for the international press to label Jews, not Arabs, living in the mandate as Palestinians. It was not until years after Israeli independence that the Arabs living in the West Bank and Gaza Strip were called Palestinians. In fact, Arabs cannot even correctly pronounce the word Palestine in their native tongue, referring to area rather as“Filastin.”

The word Palestine or Filastin does not appear in the Koran. The term peleshet appears in the Jewish Tanakh no fewer than 250 times. (Jewish Virtual Library)

1939 Palestinian Flag. What does it look like? Surprised? From Factual Israel:  (thanks to Christian)

This a Larousse French dictionary from 1939. In the appendix it lists all the then current flags of the world in alphabetical order. You’ll notice that for Germany at that time the flag was the Nazi one replete with Zwastika which proves that this was pre-1945 ( before 1945).

Now, alphabetically, look for the Palestinian Flag. YES , there is one. What does it look like? Surprised? Oh, but you thought (Mandate Jewish) Palestine was an Islamic Arab-,Turkish-, Circassian Sovereign State that the bad Jews took over , right?

Confused?
From 1920-1948 a ( class ‘A’ Mandate) State of Palestine existed as per international law but it was, as all of its major institutions, Jewish. Until the 1960s, name “Palestine” resonated as something Jewish to European ears; the Muslims rejecting the name saying it didn’t belong. The 4,000 year old Jewish homeland or “Land of Israel” or the “Holy Land” were all synonymous!!

The British as legal Mandatory over the Mandate managed or mismanaged the state partially with Jewish Auxilary until Jews regained official sovereignty in 1948, by declaring independence.

The U.N. did not recreate Israel as some people claim.

There are a lot of cultural and historic relics, artifacts and icons that validate the Jewish identity of Palestine.

Take, for example, the leading newspaper of “Palestine,” the Palestine Post (or as it is now known, the Jerusalem Post).

The Jerusalem Post is a broadsheet newspaper based in Israel, publishing only English and French editions. Its predecessor the Palestine Post was founded in 1932 by Gershon Agron. The name change occurred in 1950.

An antecedent paper,The Palestine Bulletin was founded in January 1925 by Jacob Landau of the Jewish Telegraphic Agency.[6] It was owned by the Palestine Telegraphic Agency, which was in practice part of the JTA even though it was legally separate.[6] On 1 November 1931, editorship of the Bulletin was taken over by American journalist Gershon Agronsky (later Agron).[7] In March 1932, a dispute arose between Landau and Agronsky, which Agronsky resolved to settle by establishing an independent newspaper.[6] However, Landau and Agronsky instead came to an agreement to transform the Bulletin into a new jointly owned newspaper.[6] Accordingly, the Palestine Bulletin published its last issue on 30 November 1932 and the The Palestine Post Incorporating The Palestine Bulletin appeared the following day, 1 December 1932. On 25 April 1933, the masthead was reduced to just The Palestine Post, though the newspaper continued to state its founding year as 1925 for at least a year afterwards.

The Origins of the term “Palestinian Arabs”:

No “Palestinian Arab people” existed at the start of 1920, but, by December, it took shape in a form recognizably similar to today’s.

Until the late nineteenth century, residents living in the region between the Jordan River and the Mediterranean identified themselves primarily in terms of religion: Moslems felt far stronger bonds with remote co-religionists than with nearby Christians and Jews. Living in that area did not imply any sense of common political purpose.

Then came the ideology of nationalism from Europe; its ideal of a government that embodies the spirit of its people was alien but appealing to Middle Easterners. How to apply this ideal, though? Who constitutes a nation and where must the boundaries be? These questions stimulated huge debates.

But no one suggested “Palestinians,” and for good reason. Palestine, then a secular way of saying Eretz Yisra’el or Terra Sancta, embodied a purely Jewish and Christian concept, one utterly foreign to Moslems, even repugnant to them.

This distaste was confirmed in April 1920, when the British occupying force carved out a “Palestine.” Moslems reacted very suspiciously, rightly seeing this designation as a victory for Zionism. Less accurately, they worried about it signaling a revival in the Crusader impulse. No prominent Moslem voices endorsed the delineation of Palestine in 1920; all protested it.

Instead, Moslems west of the Jordan directed their allegiance to Damascus, where the great-great-uncle of Jordan’s King Abdullah II was then ruling; they identified themselves as Southern Syrians.

Interestingly, no one advocated this affiliation more emphatically than a young man named Amin Husseini. In July 1920, however, the French overthrew this Hashemite king, in the process killing the notion of a Southern Syria.

Isolated by the events of April and July, the Moslems of Palestine made the best of a bad situation. One prominent Jerusalemite commented, just days following the fall of the Hashemite kingdom: “after the recent events in Damascus, we have to effect a complete change in our plans here. Southern Syria no longer exists. We must defend Palestine.”

Following this advice, the leadership in December 1920 adopted the goal of establishing an independent Palestinian state. Within a few years, this effort was led by Husseini.

Other identities – Syrian, Arab, and Moslem – continued to compete for decades afterward with the Palestinian one, but the latter has by now mostly swept the others aside and reigns nearly supreme.