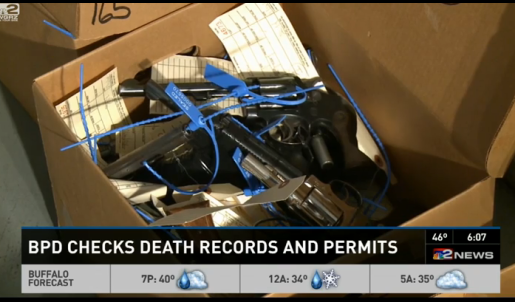 This is not an over-hyped claim although this confiscation has yet to take the form of kicking down doors and SWAT teams.

Still, rarely do such forms of tyranny come in one fell swoop with all the alarm bells ringing and the requisite flashing neon sign declaring a police state, apparently the only thing that might make Americans wake up and smell the fascism.

In the absence of that presentation, however, Buffalo police are doing the next best thing – tracking down gun owners, investigating their “permits,” and confiscating their guns if possible.

Buffalo police are now checking the records of “pistol permit holders” to see if the holders are still living. If the permit holder is no longer living, the police will investigate “what happened to their gun or guns.”

Under the guise of “illegal weapons” brought in to New York from Pennsylvania, police have informed reporters that their biggest problem in terms of guns used in crimes involved guns that had been stolen from private properties during burglaries.

Of course, police made no mention of Fast and Furious or of the fact that police are unable (and also unwilling) to investigate and respond to violent crimes because their departments are too busy enforcing the drug war, writing tickets, shooting family pets, and manning DUI checkpoints. Instead, the Buffalo Police’s response to the fact that burglaries are being committed is not to crack down on the burglars, but to eliminate the property the burglars want to take.

Channel 2 News reported that “Police feel that, in some cases, families are holding on to weapons, even after the person who bought them originally has died. [The horror!!!!!!] So now they are actually looking for those situations.”

Police Commissioner Daniel Derrenda stated that, “We recently started a program where we’re cross referencing all the pistol permit holders with the death records, and we’re sending people out to collect the guns whenever possible so that they don’t end up in the wrong hands. Because at times they lay out there and the family is not aware of them and they end up just out on the street.”

In other words, if a gun-owner dies, Commissar Derrenda will send out his storm troopers to confiscate the guns and the family members will be forced to turn them in.

The plan is erroneously considered legal due to a longstanding NY state law that allegedly allows for this type of action. Some police agencies are only allowing 15 days after the death of a family member to sell or transfer a weapon to a dealer or other permit holder.

Of course, there is no doubt the families will turn these guns in like good little slaves and that the Buffalo storm troopers will gladly enforce any law, no matter how trite and unconstitutional it may be, with impunity.

There is also little doubt that the gun-owning community, human-rights groups, activists, and everyday citizens will remain silent during the entire ordeal.

In fact, there is little doubt that those gun-owners who claimed that their guns would never be taken except from their cold dead hands will indeed have them taken while their hands are quite warm and alive.

And the brave militias and “patriots” who showed up to Bunkerville? Will they show up in Buffalo? I won’t hold my breath.

Unfortunately, in situations where rights are truly being violated and where the real hammer of the police state begins to come down, all of the keyboard commandos and armchair warriors suddenly seem so far away. Instead of righteous indignation over “taking our country back” and “bringing back the republic,” we hear “they wouldn’t do that to me,” “they wouldn’t take mine,” and “try that shit over here [insert requisite state].”

Don’t worry. They will try that shit here because you allowed that shit there. It’s pretty simple really.

The totalitarian tiptoe works perfectly. To begin with, such laws are merely an annoyance. The thought of registration, bans, or confiscation is so far away that any discussion of it is considered conspiracy theory. As populations acclimate to the gun laws in place, more laws are passed and populations adjust yet again. All the while, the government, foundations, NGOs, schools, and television propaganda are incessantly promoting the end of American “gun culture.” Eventually, after so many members of the population have become acclimated enough, gun confiscations actually do begin but only in areas that are “traditionally” hostile to gun rights.

At this point, Americans sit back and talk tough. Sure, it happens in New York but doesn’t every oppressive law pass in New York? One thing is for sure, it wouldn’t happen in Louisiana……Oh, wait, it did.