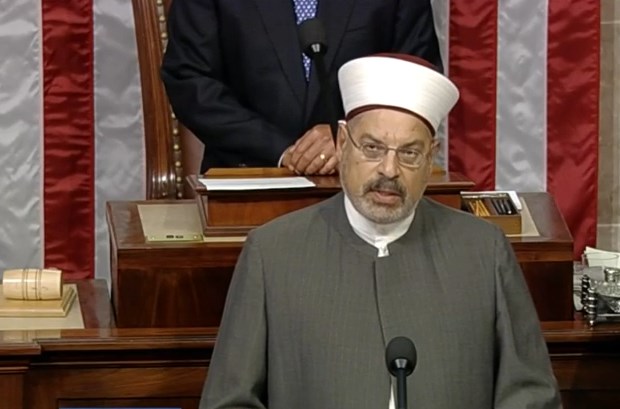 The United States House of Representatives allowed a Muslim imam to give the opening prayer on Thursday morning, in which he praised Allah, the demonic god of Islam, who is the enemy of Christ and America.

He then went on to declare, “Thee do we worship and thine do we seek. Guide us to the safe path.”

Inconsistent with the biblical prophets and the Lord Jesus Christ, Chebli deceptively said that Allah is the “god of the prophets and the messenger says in the koran, he does not place a responsibility on you greater than you can bear. Everyone will receive the good they have earned and vice versa.”

Then, the imam finally got around to his prayer.

“O god, bless us as we begin a new day,” he said. “Bless this assembly. Bless the people and nation it represents. O god, at this time in our history, the challenges for our nation and the world are many. O god, grant these men and women the wisdom, the guidance and the strength to pursue compassion, justice and sound judgment. O god, in your wisdom, you have placed upon them great responsibility and honor. O god, please help them with your guidance and your light.”

He concluded, “O god, O god, improve the well-being of all inhabitants of this great nation and beyond. Amen.”

How can a false, non-existing god do any of these things, especially in light of the history of Islam? Their history is replete with violence, tyranny and bloodshed as they have been commanded to perform in the Koran.

America, Islam is your enemy, not your friend. America has invited the judgment of God into its government and now thinks it appropriate to call upon a god promoted by a demon possessed, murdering, thieving pedophile named Mohamed. America’s leaders have not lifted a finger to stop the infiltration of Muslims into key positions in our government and only a few are willing to call them out.

Men like Chebli hold to the same ideology as those who are killing your sons and daughters overseas. They are of the same ideology as those who have murdered your fellow Americans on our own soil. Are we just going to stand by and watch this disgrace without a peep? You know the email addresses of your representatives. You know their phone numbers. You know their address. Demand that Islam be banned from entering the House or Senate ever again and that their be a forthcoming apology to the American people and repentance before God for bringing such a man into Congress.

There are professed Christians in the House of Representatives and yet, not one peep from them while a demonic deity was praised and petitioned. Shame on you!

Elijah would have been mocking this man and then calling for his removal and subsequent execution by the people (1 Kings 18). The longer Islam is tolerated in America, the more dangerous for the people and the more we provoke the true and living God to wrath against us.

Where is the Church? Where are her cries here as they have been against the lesbian mayor in Houston? Where is the outrage America that the “religion of pieces” is allowed to utter anything in the halls of our government? And don’t give me “freedom of religion” or any such nonsense of an appeal towards the First Amendment, recalling that none of that was purposed in its writing.

This came just ahead of Friday’s first ever Muslim call to prayer at the Washington National Cathedral.

America, judgment is at the door and you continue to sleep thinking that God will not bring the hammer down. Arise, wake from your slumber and put down the enemies of God and our country while there is still time to do it. Repent!