Congress, for those of you who haven’t heard, pretty much sucks.

This meme is currently making it’s way around the Internet: 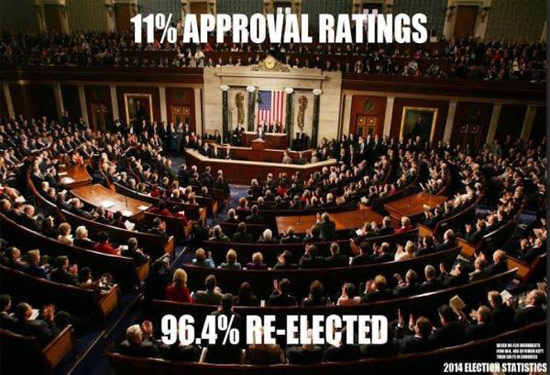 For once, this meme is absolutely true.

Again. Congress sucks. They have a toilet-flushworthy approval rating. Yeah. That’s an adjective I just made up to be able to fully illustrate the fact that I’m talking about utter crap. But instead of flushing the turds like turds should be flushed, some of America ran out to the polls like a pack of crazed jackals and OVERWHELMINGLY RE-ELECTED THESE CRIMINALS EN MASSE.

Politifact even did the checking on this one and deemed it true. The numbers could be fudged a little both ways, with the approval ratings skyrocketing as high as 14% and the re-elected numbers going down as low as 95%, but overall…THIS MEME JUST HAPPENED TO AMERICA.

“Voters hold Congress in low regard, yet they re-elect almost everyone,” Politifact declared.

It’s like watching millions of people repeatedly attempt to scoop their eyeballs out with a rusty spork in the dark on schedule every few years. It’s painful. It hurts. It burns.

I imagine it’s like having a case of raging hemorrhoids would be if you lived in a word where all the chairs were made out of starving sharks.

I mean, it’s bad enough that studies show 91% of the time, the candidate not with the most merit (HA!) gets elected or re-elected, but the one with the most money wins.

Because apparently we’ve all equated kissing lots of ass at fancy fundraisers with being able to run the country on sound moral principles and, oh yeah, the Constitution? It’s about what their constituency wants and checks and balances…accountability and transparency and all that, right?

Oh wait, I’m sorry, D.C. Rep. Eleanor Holmes Norton had to set that one straight for me:

As TPNN reported, “Allow me to make this clear: A Democrat representative told the House Oversight Committee that they have no right to scrutinize government. The committee, as the name would suggest, is responsible for overseeing the federal government as a check against abuses of power.”

This woman ran basically unopposed in the latest election, by the way, but somehow she still managed to get 97 percent of the vote.

That’s right. Even though the number of people who voted for her only equal a little over 11% of the total population of Washington D.C., that still means 73,218 people drooled all the way to the voting booth and managed to figure out how the buttons work on the little electronic machine thingy.

Seventy three thousand two hundred and eighteen people. I had to spell it out because that’s a scary large number of people who scare me. To all the people who argue, “So what, the D.C. rep doesn’t have an actual vote or really represent anything,” please tell that to 73,218 of your fellow Americans who still felt the need to officially give Rep. Norton their consent to receive a hefty taxpayer-funded paycheck and a public podium for her rampant verbal diarrhea.

To top that off as I’ve reported before, some 297 Congresspeople have earmarked $3.8 Billion for organizations tied to them or their family members.

Isn’t that sweet? But not “awww” sweet, more like horrible case of Type II diabetes and you have to get your legs chopped off because you can’t stop drinking three gallons of maple syrup

at every meal sweet.

This country needs term limits like Hillary Clinton needs a soul. (In other words, bad.) 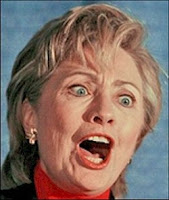 If this picture had sound, it would be that noise Godzilla makes when it destroys Tokyo…on loop.

Yeah, that’s because Moran said we just don’t get the fact that Congress is, “the board of directors for the largest economic entity in the world.” He went on to say, “A lot of members can’t even afford to live decently when they’re at their jobs in Washington.”

Aww…you guys! They can’t even afford to live decently, whatever the hell that’s supposed to mean when it comes to a politician (hookers, crack and payoffs, oh my?).

Wow. Just wow. What other jobs do you know of where you can only get things right a pitiful 11% of the time and still enjoy an uninterrupted sense of job security?

I mean, even the person who sews extra-extra-small pairs of boots for chihuahuas

has a certain level of professionalism expected from him or her and a quota for number of pairs properly put together which must be reached, or that person gets canned. If they hardly ever showed up or never did what they were told or suddenly started making elephant boxers instead of tiny dog shoes or something, they would be F-I-R-E-D fired. Period.

Come on, America. I’m talking to you people who still find it within yourself to take the time and effort to go participate in the dog and pony show that is voting in this country. You know how it’s always said if you don’t vote you can’t bitch? Not true. I didn’t and I can and I am right now, see?

If none of us voted, or we all voted these people the hell out and cleaned house, or voted no confidence, or just shunned the whole entire show and turned our backs on it like the Amish, we might stand a chance. But instead, a whole bunch of you still decided to go ahead and go legitimize this totally corrupt system by participating and voting for these people anyway.

Why????? Do you dare call these freaking people leaders?!

I hate to break it to ya, but casting a ballot for a new captain after the Titanic has already hit the iceberg isn’t going to mean that baby won’t wind up on the bottom of the ocean regardless.

Then again, this election did show the lowest voter turnout in 72 years. That’s right. Only 36.3 percent of eligible voters even bothered to show up and cast votes nationwide.

So maybe there is hope yet…

(Oh wait, does that number even account for all the rampant voter fraud? HAHAHAHHAHAHAHAHHAHAHAHA I bet it didn’t. How many people do you think actually showed up? What a joke.)