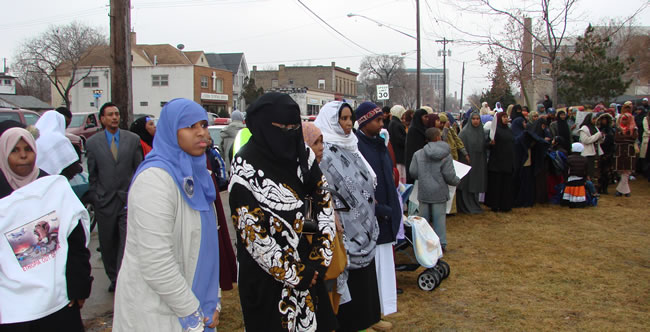 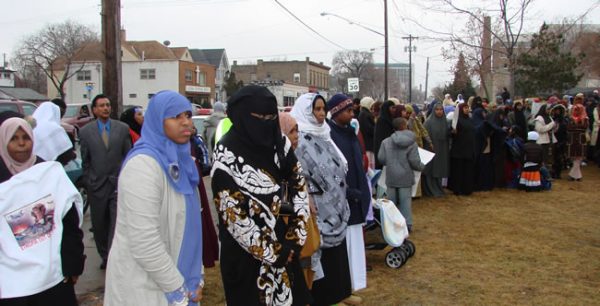 They are going there to get subsidized Section 8 housing vouchers to take to another state.

Refugee resettlement is a euphemism for importing whole Muslim communities, importing jihad. I have long documented the targeting of gateway cities (smaller cities) overwhelmed with Muslim refugee immigration from countries like Somalia — cities like Emporia, Kansas, Nashville, Greeley and Fort Morgan, Colorado, Lewiston, Maine et al. The over-saturation and drain on city resources has driven these immigrants northward to settle in Wyoming, according to these reports.

Most Americans are unaware that under the “Refugee Resettlement Program,” whole Muslim communities from hostile nations are imported into the United States, circumventing whatever immigration laws that are still intact.

This is made even more dangerous by what organization determines who are refugees and who aren’t. It’s the UN, driven largely by the world’s largest international body, the Organization of Islamic Cooperation (OIC). The OIC is a modern-day caliphate made up of 56 countries and the Palestinian terrorists.

For years, a handful of my colleagues and I have warned of the reckless immigration polices here in America and in the West — refusing immigration status to persecuted religious minorities (Christians) under Islam (Afghanistan, Iraq, Syria, Egypt, etc.), while allowing whole Muslim communities from jihad nations to immigrate.

I have documented this dangerous practice and warned of the eventual consequence of importing jihad. We have seen its deleterious consequences with many members of the Somali community in Lewiston, Emporia, Greeley, etc. Muslim gangs targeting women, gays ….

What are the numbers of Muslims coming into the US from jihad nations under the Obama administration? And why aren’t the victims being given the opportunity to escape the vicious and bloody jihad by Islamic supremacists?

Ann Corcoran reminds us here to keep in mind as you read this article that the meat packers (often foreign-owned companies) get cheap captive laborers and “you, the American taxpayer, supports the rest of the refugee family’s life.”

“So why are those Somalis moving to Cheyenne, WY? Prepare to be shocked,” Refugee Resettlement Watch

(See our earlier posts here and here about Somalis in Cheyenne.)

This is an NPR radio report at KQED that aired this past Wednesday. Here is the astounding transcript (but be sure to listen to the 3 minute story):

(Emphasis below is mine)

In the last few years demand for public housing assistance across the country has skyrocketed, while congressional funding has stayed flat

Right now federal funds covers less than a fourth of families in the United States eligible for a Section 8 housing voucher. Waitlists for voucher in big cities are often years long, if not closed all together. As Wyoming Public Radio’s Miles Bryan reports that made small cities like Cheyenne more attractive to those seeking housing aid, because of shorter wait times.

Tuesday night is when Cheyenne’s Somali community gets together at the Free Evangelical Church to catch up and socialize. Its usually busy but tonight is packed: church volunteers have subbed out the regular English classes for a special lesson in blanket making. (Yeh, who needs English anyway—ed)

Cheyenne’s Somali population has grown rapidly in the last couple of years. That’s surprising because Wyoming doesn’t have an official refugee resettlement program, and most jobs around here require fluent English.

But Cheyenne has one really big draw: housing assistance.

Faiso Abdi moved to Cheyenne last year. She says she was happy living in Greeley Colorado, but she couldn’t even get on the waitlist for that city’s section 8 housing voucher program.

“The real problem is that people are desperate for the housing subsidy and they are willing to do almost anything to get one.”

Cheyenne’s voucher wait list runs almost a year, but many bigger cities like Greeley have simply stopped accepting new applicants entirely. But here’s the thing: getting your housing voucher in Cheyenne doesn’t mean you have to use it there. Organizer Gretchen Carlson says what’s called “portability” is a big draw.

“There are quite a few of them that have already lived here one year and then have moved elsewhere. But they lived here for one year in order to get that voucher.”

Housing voucher money is distributed city by city, but it all comes from the Feds, and they say that every housing voucher eventually has to become portable, or transferrable to any city in the US. Cities can decide whether to let you port your voucher immediately or require you to wait a year. So if you can’t get a housing voucher in say, Denver, you can get one in Cheyenne and, a year later, take it with you back to Denver.

“The frustration is that pot of money was provided to address housing needs here in Wyoming.”

That’s Mike Stanfield, Executive Director of the Cheyenne Housing Authority. When people take vouchers out of Cheyenne the receiving housing authority can chose to absorb the cost or keep billing Cheyenne. Stanfield says lately Cheyenne has been footing the bill more and more often. And while the average cost for a Cheyenne voucher is only about 400 dollars.

“The average cost for a ported voucher that moves somewhere else is 733 dollars.”

“And when they are told that waiting list is 12 to 18 months that is almost beyond comprehension for those families. They are struggling trying to get to tomorrow. Let alone 18 months from now.”

Susan Popkin is a Fellow at the Urban Institute. She says portability is not a problem.

“The real problem is that people are desperate for the housing subsidy and they are willing to do almost anything to get one.”

Popkin says portability is a vital part of the system: it means families don’t have to pass up a better job somewhere else just to keep their housing. She says what’s happening in Cheyenne is a just one symptom of the overwhelming need for housing help across the United States.

“Things that used to be ‘oh well, we can handle it’ ten, fifteen years ago–they just they can’t anymore.”

In Cheyenne Housing Authority Director Mike Stanfield has decided he can’t handle the outflow of housing funds anymore. Recently he began a policy of giving preference for housing vouchers to Cheyenne locals.

Wait for it!  Can we expect CAIR to ride to the rescue of the Somali Muslims in Cheyenne?

See all of our coverage of the conflict involving Governor Matt Mead going on for a year now about whether Wyoming should become the last state in the nation to directly “welcome” the third world to come on in—our welfare is great!

And, those resettlement contractors dare to tell us that refugees bring economic benefits to communities when, in fact, they are taking from American low income people!