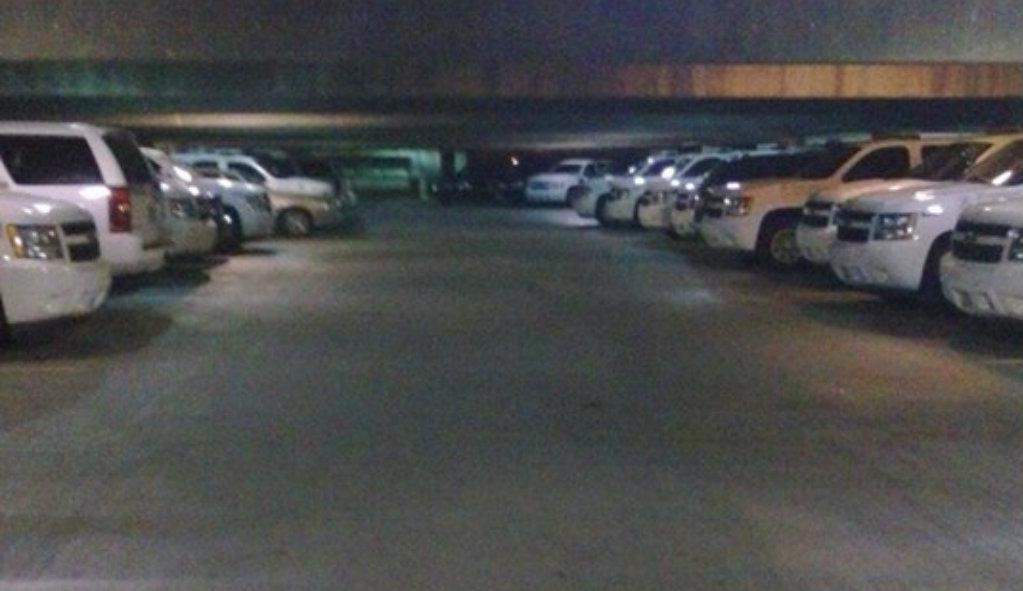 A Navy veteran was labeled a “terrorist” and fired from his job as a Houseman at the Drury Plaza Hotel in Chesterfield, Missouri after he posted a video of dozens of Homeland Security vehicles and asked if they were linked to impending civil unrest in Ferguson.

The chain of events began when 28-year-old Mark Paffrath saw dozens of DHS vehicles in the parking garage of the hotel on Thursday evening. He took photos and video footage of the vehicles before uploading them to Facebook alongside the words, “I wonder if it has anything to do with Ferguson” along with the hashtags #Ferguson and #NoJusticeNoPeace. Drury Plaza Hotel in Chesterfield is located 25 miles southwest of Ferguson.

The following day, Paffrath was ordered to remove the photos by his boss Jeff Baker, the General Manager of the hotel. Paffrath complied with the demand and immediately removed the images, but the next day he was called in to a meeting with Jim Bohnert, Director of Security for Drury Hotels Company, LLC.

Bohnert, who previously worked for the Secret Service, told Paffrath that his actions had jeopardized a $150,000 dollar contract the hotel had with the DHS and that the Navy veteran had committed an action of terrorism by posting the photos.

“You’re a terrorist and you have dishonorably served your country by posting the photos and video,” Bohnert told Paffrath, adding that if Paffrath re-posted the photos and video he will, “have the federal government knocking on your door and you will be incarcerated.”

Paffrath subsequently re-posted the photographs on Facebook before commenting, “so apparently, I’m a terrorist lol.”

Argus Streaming News’ Christopher Gagne said he drove through the parking garage and that around 100 Homeland Security vehicles were still situated there. Gagne attempted to get a comment from a hotel manager on the incident but none was forthcoming.

As we have documented, police departments and National Guard units from across the country are making preparations for domestic disorder in the aftermath of the Grand Jury verdict in the shooting death of Michael Brown, a decision likely to be announced this week.