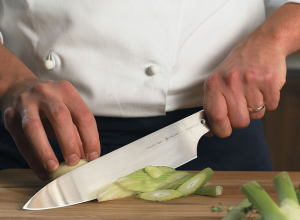 Among second amendment advocates, it’s been frequently argued that any effort to control the sale and use of firearms, even if it sounds reasonable, will lead us down a slippery slope towards all out gun control. Efforts to limit magazine capacities and register firearms are just the first steps toward banning and confiscating all guns. And it won’t end there, of course. Before you know it, the nanny state will start banning knives and kitchen cutlery! What a joke.

Except it’s not a joke anymore. You only need to take a look at the headlines in Britain to witness the absurdity of “knife control” at its best.

The new “Save a Life – Surrender Your Knife” program is in full swing and police are telling us that they have joined forces with an already growing trend in the United Kingdom to ban “pointy” knives.

Lancashire Police tell us that an “amnesty” program began at the end of August, and “more than 800 knives have been handed in across the county – including swords, machetes and commando knives.”

“The amnesty was extended for a further week owing to its success,” Lancashire Police representatives explained.

The Lancashire department explains that their “officers have now given their backing to a national initiative designed to raise awareness of knife crime and encourage the surrender of dangerous weapons.”

In spite of the amnesty ending this week, police tell us that “people can continue to hand in any knife at any police station with a front counter as well being able to drop them into the designated bins.”

In the United States, the gun buyback program is a classic example of a nanny state successfully cowing members of the population into giving up their weapons. Only a completely lobotomized population would stand in line all day for the “privilege” of being disarmed by the local police. Never in my wildest dreams would I have guessed that someday, a similar program would be used to collect knives as well.

Unfortunately, the absurdity of the situation doesn’t end there.

“We’ve been delighted with the response so far, but our communities have told us that they want an end to knife crime and that they want to work with us to make that happen.”

A call from the British Medical Journal was published several years ago, arguing that “many assaults are committed impulsively, prompted by alcohol and drugs, and a kitchen knife often makes an all too available weapon,” according to the BBC.

Knife crime? Is that what they’re calling it? You can’t just refer to it as a violent crime, or a crime of passion. Apparently knives are special and scary. I had no idea that there was such a big difference between being murdered with a knife and being murdered with a cricket bat, or a crowbar.

What if in another 20 years, they’re asking you to turn in all blunt object that are capable of bludgeoning someone? After that they’ll ask you to turn in your shoelaces so you don’t hang yourself. I imagine most people wouldn’t want to live in a world where literally everything can be dangerous, therefore, everything is illegal.

If you think I’m exaggerating, take a look at the facebook page for the Lancashire Police Department. They subtly hint at their true intentions.

While projects encouraging the surrender of knives are not a single solution to violence, they have an important role to play in inspiring communities to get behind education and preventative measures.

You can’t laugh about it. It’s not a joke anymore. There is no longer any limit to what can be controlled and regulated. Most people would have laughed hysterically if you told them there would be calls for knife control someday. And not just butterfly knives and switchblades, but apparently, anything that is “pointy”.

Researchers “consulted 10 top chefs from around the UK, and found such knives have little practical value in the kitchen. None of the chefs felt such knives were essential, since the point of a short blade was just as useful when a sharp end was needed.”

I just… I don’t know what to say. Should I laugh or should I cry?

Ok Britain, we need to talk. Let’s call it an intervention. I know Americans aren’t perfect, and sometimes people from other countries with different perspectives can look at our culture and tell us “hey, what you’re doing there is pretty bad”. The rampant prescription drug abuse, the overflowing prisons, the income inequality… all that stuff. We certainly have problems, and sometimes it takes someone from the outside to look at it and tell us how bad it is.

But in this case, I think we know what we’re talking about. You’ve got a serious problem. You’re no longer trying to make people safer. You’re building a prison around them, and you’re out of control. Once you ran out of guns to confiscate, you started taking away the cutlery. Are you insane? Do you have some impulsive desire to be disarmed? Do your people feel the need to embrace weakness and collectivism?

Whatever it is, I hope you find help soon. Because as an American looking at this from the outside, you look and sound completely mad.

I know there’s still a lot of awesome freedom loving Brits out there. If you’re reading this, tell us what you think in the comments