The timing on the Department of Homeland Security supposedly “training” in droves in Chesterfield, a suburb of St. Louis less than 25 miles from Ferguson where authorities are expecting riots following the grand jury decision in the Michael Brown case, is nothing short of amazing. 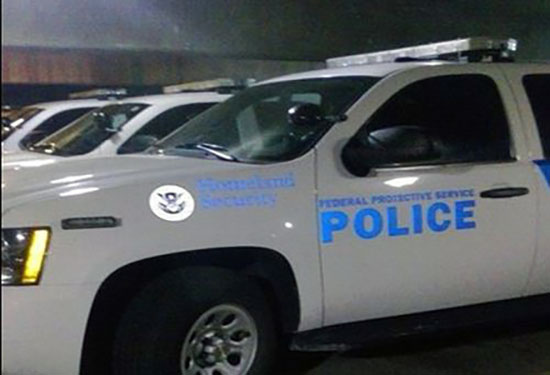 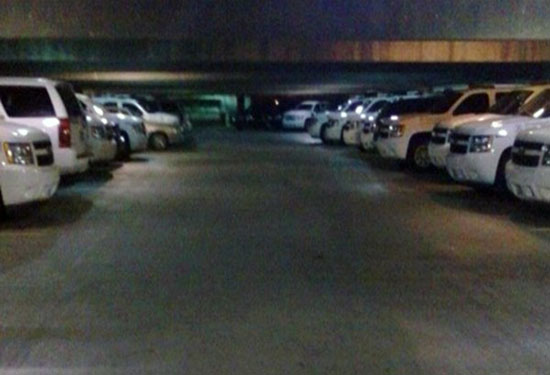 A Navy vet named Mark Paffrath who worked at the Chesterfield Drury hotel has been deemed a “terrorist” and fired by his boss for posting pictures to social media showing dozens upon dozens of white DHS SUVS parked at the hotel which have, “Federal Protective Service POLICE” and the Homeland Security logo emblazoned on the side.

“He called me a terrorist and said I dishonorably served my country for posting those pictures and the short video,” he said. Then, “He gave me a threat that if I were to repost the pictures that I would be locked up and have DHS knocking on my door and all that other stuff.”

Shocked to see so many DHS vehicles in the same place at the same time, the vet took to his Facebook page, which also included a snapshot of this sign about Homeland Security’s visit for the hotel staff: 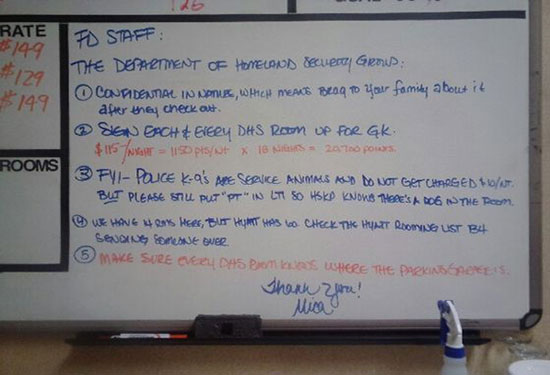 The sign discusses how the names of the DHS guests are “confidential” so “brag to your family about it after they check out” and that “police K-9s are service animals” and do not get charged extra.

A lot of people in story comments across the Internet are saying they’re going to boycott Drury Hotels now for firing Paffrath.

Some mainstream outlets are reporting that the DHS is just there for training, nothing else.

It’s funny DHS thinks they can amass 100 vehicles anywhere and not get their picture taken in this day and age of technology and instant sharing. A hundred of anything is usually a sight to behold, but a hundred federal police cars sitting together right outside the very spot where every official law enforcement agency from local to state to federal is waiting with bated breath for a full-on riot to break out is bound to turn more than a few heads.

Considering that Missouri Governor Jay Nixon has preemptively declared a 30-day state of emergency for the entire state, in addition to activating the National Guard, before the grand jury decision has even been read, it’s a little hard to buy the official line that this massing of DHS agents right outside the potential riot zone is just for the most coincidentally timed “training” ever (complete with police K-9s).

The FBI has also issued a bulletin declaring that the Ferguson decision “will likely” lead to violence by “extremist protesters” exploiting the situation, causing some to quote “threaten and even attack police officers or federal agents.”

On top of that, Ferguson police have stocked up on less-lethal ammunition in the last few months including  “hornets nest” CS sting grenades, which shoot out dozens of rubber bullets and a powdered chemical agent upon detonation, tear gas, riot gear, plastic handcuffs and the like in the lead up to the decision which is expected to come any time now. St Louis County police have spent $172,669 on this stuff just since August.

With the media in lockstep to rile people up, the perfect storm is now brewing in Ferguson. Last night, one of the top Google Plus posts featured at the very top front-and-center on Google News was the headline, “The Nation Braces To Watch Ferguson Missouri Burn To The Ground.”

“I expect about half the city to be in flames by midnight. I think most people do as well,” Google Plus poster K.B. Burnfield wrote. “No matter what the verdict of the grand jury there will be violence and there will be fire. Any good or progress protests might have made will be ruined by the crazies and the idiots who just want to cause trouble and serve their own agenda. I hope I’m wrong but I doubt it.”

People’s buttons have been effectively pushed. The authorities have geared up. The protestors have been riled up. The powers that be are going to sit back and watch the show.

The best comment I’ve seen so far came from a random commenter on a Washington Post story about how people are acting like…well…predictable sheep:

“Fear is a very powerful weapon, it catalyzes, it causes division, it can be used as an excuse to remove even more civil liberties. Make no mistake America, there are reasons the media are portraying this, in this particular light. You are ALL being manipulated.”