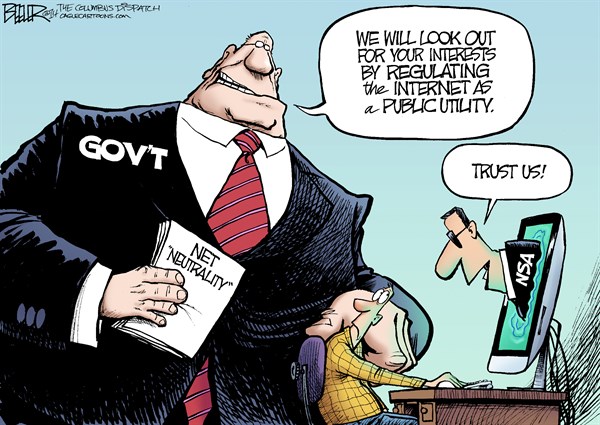 When I first heard people talking about Obama’s attempt to push the Federal Communications Commission (FCC) to “keep the internet free and open” I thought, well, that sounds good to me. Last Monday, in his plea for the implementation of rules for net neutrality, Obama used terms like “fairness” and “freedom”. He expressed the need for more government control to ensure equal Internet access for everyone.

And he said that abandoning the principles of net neutrality “would threaten to end the Internet as we know it.”

But, as with everything else that interests me, I had to research it for myself. Whenever a politician (especially one who aggressively forces things like Obamacare) pushes for something, I think it is natural to have some level of skepticism.

So, for the last week, I have been heavily researching this so-called “net neutrality” to find out what it is all about, and why so many support it.

In reality, “net neutrality” is as confusing as its name.

There are two pieces to this that need to be identified and explained before we go further. One is the term “net neutrality”and other is Title II regulation.

What IS net neutrality?

Here’s what Obama wants to you think it is:

“Net neutrality” has been built into the fabric of the Internet since its creation — but it is also a principle that we cannot take for granted. We cannot allow Internet service providers (ISPs) to restrict the best access or to pick winners and losers in the online marketplace for services and ideas. That is why today, I am asking the Federal Communications Commission (FCC) to answer the call of almost 4 million public comments, and implement the strongest possible rules to protect net neutrality.

Obama wants the FCC to “create a new set of rules protecting net neutrality and ensuring that neither the cable company nor the phone company will be able to act as a gatekeeper, restricting what you can do or see online.” (Could it be that this is a way for the GOVERNMENT to restrict what we can do or see online? Read on to find out.)

Here are the rules he is recommending:

How does Obama want the FCC to do all of this?

His explanation, in his own words:

So the time has come for the FCC to recognize that broadband service is of the same importance and must carry the same obligations as so many of the other vital services do. To do that, I believe the FCC should reclassify consumer broadband service under Title II of the Telecommunications Act — while at the same time forbearing from rate regulation and other provisions less relevant to broadband services. This is a basic acknowledgment of the services ISPs provide to American homes and businesses, and the straightforward obligations necessary to ensure the network works for everyone — not just one or two companies.

The “other vital services” Obama is referring to are public utilities like water and electricity. In other words, he wants the internet to be regulated the same way.

All of that makes it sound like Obama is looking out for American citizens, doesn’t it?

Back in June, Tom Woods talked to Berin Szoka about net neutrality and what it means.

Szoka is the president and founder of TechFreedom, a non-profit technology think tank in Washington, DC. Before founding TechFreedom, Berin was a Senior Fellow and the Director of the Center for Internet Freedom at The Progress & Freedom Foundation, and previously practiced Internet & communications law.

Please visit TechFreedom’s net neutrality myth-busting website Don’t Break the Net for a more detailed explanation of Title II and what reclassifying the internet would mean for consumers.

Here is Szoka’s interview with Woods.

Is Obama exploiting the confusion over net neutrality in an attempt to push draconian Title II regulation – and, ultimately, more taxes – upon citizens?

It sure seems that way.

He is misrepresenting what “net neutrality” actually is and what Title II regulations would actually do.

This morning, President Obama called on the FCC to “reclassify” broadband under Title II of the Communications Act so it can ban all paid prioritization. TechFreedom President Berin Szoka responded as follows:

Title II means the very opposite of net neutrality. Even under Title II, the FCC can’t legally ban all paid prioritization — only regulate it to make sure that prices are just and reasonable. In fact, Title II would authorize broadband providers to charge some price to content and service providers for carrying their traffic to users — and there’s no precedent for the FCC from “forbearing” from this requirement in a market that it claims is a “terminating access monopoly.” Title II would raise a host of other problems, including choking broadband competition, inviting regulation of the rest of the Internet and validating Russia and China’s push to have the International Telecommunications Union regulate the Internet as a telecom service.

Obama’s statement is simply a cynical political ploy, a way of playing to activists on the radical Left who have built mailing lists and a political movement on the most absolutist conception of net neutrality. Forbearance, the process by which many claim the FCC could make Title II palatable, will only be politicized even further by Obama’s inflammatory rhetoric.

This is simply the opening salvo of the legislative fight over net neutrality that has been brewing for nearly a decade. No-blocking and transparency rules are uncontroversial: back in 2006, 215 House Republicans voted for them as part of badly-overdue update to the Communications Act. The debate has always been about two questions. First, how to craft a non-discrimination rule that bans anti-competitive behavior — but doesn’t ultimately harm consumers? That means policing paid prioritization under flexible rules, not banning it. Second, how to prevent net neutrality from leading to larger regulation of the Internet? That means barring Title II, clarifying that Section 706 isn’t a grant of authority, and giving the FCC narrow authority to deal with truly harmful broadband practices.

A legislative deal is possible, but both the President and Congressional Republicans would have to get beyond soundbites and start talking substance.President Obama’s bizarre insistence that four million Americans supported Title II, when nearly a quarter of the comments filed with the FCC actually opposed Title II, doesn’t augur well for the negotiating process. A more pragmatic president would have used this opportunity to work with Republicans and the dozens of Congressional Democrats who’ve opposed Title II on a legislative deal — the way that Clinton and Gingrich resolved welfare reform and the key debates of their day.

If FCC Chairman Tom Wheeler does what Obama wants him to do, the repercussions to Americans will be quite unpleasant.

If broadband is reclassified as a Title II public utility, the FCC will soon start taxing it – at an estimated $87/year per broadband household.

And then, there’s this:

On September 18, 2014, President Obama signed House Joint Resolution 124, which includes provisions
extending the Internet Tax Freedom Act (ITFA) through December 11. The Act was previously scheduled
to expire November 1, 2014, and the extension gives Congress a chance to consider the ITFA’s long-term
future during the lame-duck session after the midterm elections. (source)

Why is this significant? Steve Pociask, president of the American Consumer Institute Center for Citizen Research, explains:

Using existing state laws, these regulations would be free to tax Internet services as a regulated or public utility service. In addition, the Internet tax moratorium will end on December 11th, which will give state and local governments the right to levy Internet taxes on consumers. If common carrier taxes are any benchmark, we can expect Internet taxes on consumers to increase to a rate of 17 percent. Ironically, the increase in price would suppress consumer demand and block Internet access far beyond whatever “openness” could hope to be achieved by net neutrality. This would be regulatory mismanagement at its finest.

And what about privacy? Grant Babcock of Reason addressed this in his article Net Neutrality—and Obama’s Scheme for the Internet—Are Lousy Ideas:

We know, indisputably, thanks to the heroic disclosures by Edward Snowden and the tireless work of journalists like Laura Poitras and Glenn Greenwald, that the federal government is attempting to use the Internet to build a global Panopticon, capable of accessing everyone’s personal information at any time for any reason or no reason.

We also know that one way the government is trying to accomplish this is by securing the cooperation of private companies. You can attempt to thwart surveillance by using encryption—but encryption only protects data in transit. Once it’s received and decrypted, it’s an open book. If the government can compromise private data custodians, encryption loses a lot of its efficacy. This is exactly what happened to Google, which had its internal traffic bugged by the NSA.

Sometimes instead of outright sabotage, the government pressures companies into turning over information about their customers. See, for example, the brave efforts of Ladar Levison, head of now-defunct secure email provider Lavabit, to protect his customers—including Edward Snowden—from the government’s prying eyes.

But not all tech companies have the spine of Lavabit. What we risk doing by ramping up the government’s regulatory authority over the Internet is to make it easier for the government to pressure ISPs, many of which are data custodians, to get what they want.

Babcock also points out that the government is not above using its “‘legitimate regulatory’ authorities to bully private actors.” He references the heavily-regulated financial industry and the blackmailing of healthy banks into taking unwanted TARP money by Bernanke’s Federal Reserve. The government’s “Operation Choke Point” program, which puts pressure on banks to refuse to deal with people engaged in perfectly legal businesses the Obama administration, for one reason or another, doesn’t like, is another example.

The bottom line? Obama’s idea of “net neutrality” is not “neutral” and is not consumer-friendly. Not one bit.

Here’s a heavily-researched video on the history of the internet and FCC regulations, related corruption, and why net neutrality is not good for consumers. It is long, but worth watching.

Don’t be fooled: Net neutrality is all about cronyism

The Net Neutrality Debate Is About Companies & Politicians Own Posturing

We Need Real Competition, Not a Cable-Internet Monopoly

Net Neutrality Is A Bad Idea Supported By Poor Analogies

A Perfect Storm: Net Neutrality And The End Of The Internet Tax Moratorium