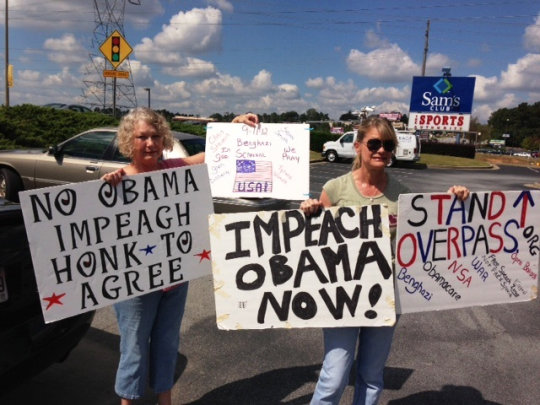 Powerlessly watching our nation fall in not-so-slow motion is a nightmare from which we cannot wake up. It’s clear to all but the most obtuse and deceived among us that the United States of America has been taken over by Marxist enemies within. We have a completely lawless president, a man who speaks only lies, who has shown himself to be an anti-American subversive, hell-bent on the destruction of our Constitution and representative Republic. Using extra-constitutional schemes, blatant fraud and federal bureaucratic dictates, he is destroying our economy, our energy sector, our healthcare system, our borders, our military and our freedoms. He is giving aid and comfort to our Muslim enemies. He is spitting on every constitutional provision designed to check his power.

And the Republicans refuse to stop him. Instead, they have shown themselves to be corrupt cowards. For years now, I have wondered what the Republicans fear from Barack Obama (or whatever his name is). Long ago, his blatantly unconstitutional behavior in office, his political “high crimes and misdemeanors,” warranted his impeachment. Richard Nixon and Bill Clinton look like boy scouts compared to Obama, and impeachment proceedings were launched against them both. Yet, the Republicans seem scared to death of moving to impeach Obama. They have stopped no part of his agenda, and they have surrendered their power for no discernible reason.

There is only one legal remedy for dealing with a lawless president: his impeachment and removal from office. I have no interest in hearing from the “it’ll never happen” crowd, because our nation is currently in critical condition, and something must be done to stop this evil, malicious man and his fellow travelers. We are standing on the brink of Obama’s complete obliteration of our national borders by illegally granting “amnesty” to the hordes of foreign invaders who have stolen into the United States.

The establishment Republican leadership has rejected the idea of impeachment, as if it’s some kind of distasteful action only rubes would take. Their cowardice is detestable. They plainly don’t give a rip about the white-hot outrage of the American people toward this traitorous man in the White House. But why are they against impeaching him? Did you see the pathetic excuse Congressman Trey Gowdy gave for rejecting impeachment? On Bill O’Reilly’s show, in answer to the impeach Obama question, he quipped, “Have you met Joe Biden?” So, because Joe Biden is a bad prospect, we should just leave Obama in place to finish his demolition of the United States? A crummy Vice-President in no way absolves the Republicans from their duty to remove the lawless Obama from the presidency.

The only reasons I can fathom that the Republicans refuse to impeach Obama are fear or agreement. Either they’re too afraid to move ahead with impeachment, or they agree with his agenda. I tend to think it’s probably fear, although I have no doubt there are more than a few globalist, establishment “Republicans” who do indeed agree with Obama’s evil plans for this nation. Republicans know that the media would go berserk if they moved on impeachment, and they fear the media and the damage the media can do to the Republicans’ “image.” I’m certain they also fear the useful idiot agitator base of the Democrat party, the goons in the streets.

Back when the thug Michael Brown was shot by police in Ferguson, Missouri, the swift, violent reaction of the “protesters” was outrageous. What little of the story anyone knew didn’t make sense from the start—that a policeman, for no reason, just shot Brown as he walked down the street in the middle of the day. We all knew there was more to it than what the media was repeating ad nauseam about the “unarmed black teen” and the “white police officer.” It has since become clear that the officer was indeed justified in using deadly force against Michael Brown, but we know that the truth doesn’t matter to the violent, mindless mobs that are determined to rain destruction and mayhem on that area when the grand jury likely declares that the officer was right to do what he did.

This week, we also learned that Obama met with the Ferguson “protest leaders” a day after the midterm elections. He told them to “stay on course.” What course?! What in the world is this devil encouraging these people to do? There is only one conclusion. He is encouraging the lawlessness and property destruction we have already seen from these people in Ferguson. For a “president” of the United States to use his influence to act like a street-hustling agitator to incite violence is unheard of in our time, and he should be arrested for that outrageous abuse of his position and what is a clear call to violence.

What we have seen in Ferguson is a microcosm of what the evil-mongers of the Left would likely unleash on America in the event of impeachment hearings on Obama. So, is the prospect of a nationwide “Ferguson” what’s keeping Republicans from impeaching Obama when they take Congress in January? Here’s how it could be: So, you want to impeach Obama? Well, take a look at Ferguson. How would you like to see that happen all across the nation? Believe me, we can make it happen. Should you decide to move on impeachment, your cities will burn. So, you’d better just keep attacking and maligning that America-loving, “yahoo” conservative base of yours, and you’d better just keep letting our man in the White House go ahead with The Plan for your nation. You just stand down, and your family will not be in danger, and the FBI won’t find any revolting, illegal images on your personal computer.

Whatever their reasons for behaving in such a cowardly manner for the past several years, the Republicans have a duty by the Constitution they swore to uphold to make their first order of business in January to impeach and remove Barack Obama from the presidency. That’s one thing Obama can’t veto. The survival of our freedoms and constitutional, representative Republic depends on these people putting the United States of America above their selfish political interests and their fears of the senseless bully hordes in the street.