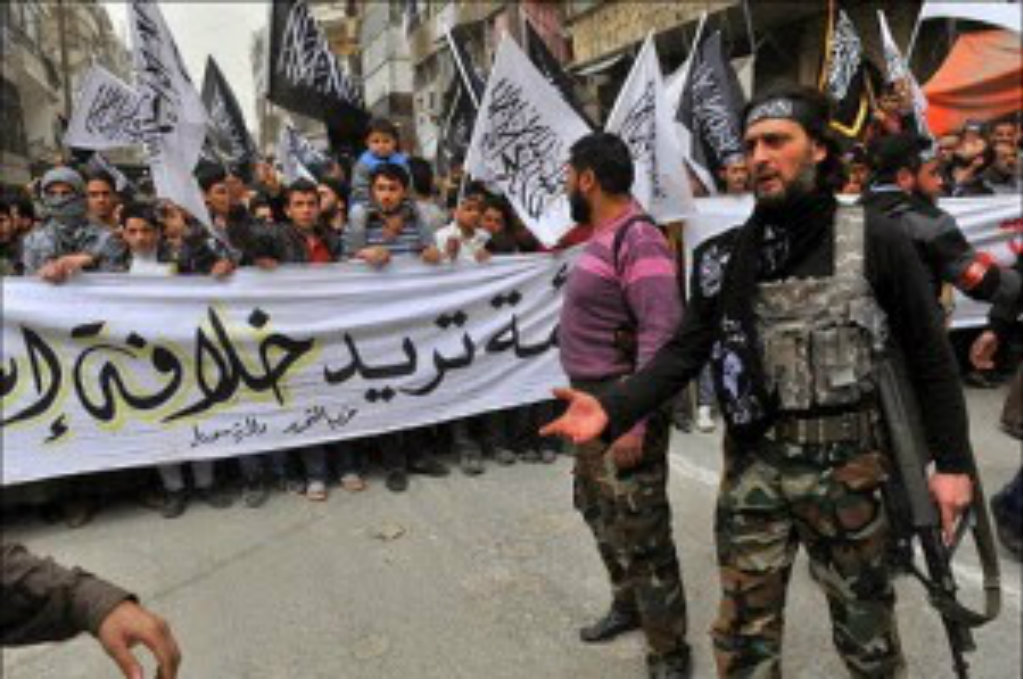 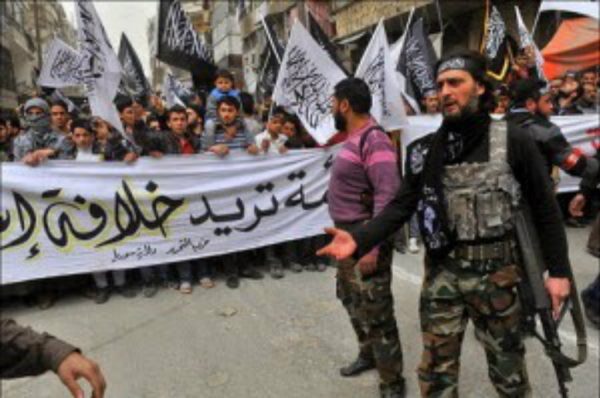 Al Qaeda affiliates are suddenly now Islamic State (ISIS) affiliates, and entire groups of militants the US has been arming, funding, and training are “surrendering” to Al Qaeda, bringing along with them a large number of US weapons. Is this a failure of US foreign policy? Or is this simply a rhetorical means to explain away what appears to be an immense army of extremists the US is once again building up to direct at one of its enemies, just as it did in Afghanistan in the 1980s?

In late September, just in time to aid the US in its fumbling justification for bombing Syria, terrorists allegedly beheaded a French tourist kidnapped in the North African nation of Algeria. The timing, as with previous ISIS executions, was impeccable, lending maximum propaganda value, not to the terrorist organization, but to the United States which has utilized each grisly murder as a means for direct and continued military intervention on both sides of the Syrian-Iraqi border.

The BBC in their article, “French hostage Herve Gourdel beheaded in Algeria,” would report that:

The beheading, the spokesman says, is to “avenge the victims in Algeria… and support the caliphate” proclaimed by IS in Iraq and Syria.

Jund al-Khilafa (Soldiers of the Caliphate) pledged allegiance to IS on 14 September.

Until then it had been known as part of al-Qaeda in the Islamic Maghreb (AQIM), which grew out of an Algerian militant group and is now active across North and parts of West Africa.

Al Qaeda in the Islamic Maghreb, or AQIM, was directly associated with terrorist groups armed and backed by NATO in the 2011 invasion and bombardment of Libya in efforts to overthrow the government of Muammar Qaddafi in Tripoli.

In a 2007 West Point Combating Terrorism Center (CTC) report and a 2011 CTC report, “Are Islamist Extremists Fighting Among Libya’s Rebels?,” AQIM is specifically mentioned as working closely with the Libyan Islamic Fighting Group (LIFG) and it was predicted most notably by geopolitical analyst Dr. Webster Tarpley, that even before NATO began dropping bombs on Libya that by doing so, they would be thrusting not only LIFG into power, but empowering a regional network of extremists, including AQIM. AQIM’s presence shortly thereafter in northern Mali, flush with weapons from Libya and a new sense of purpose as well as the fact that AQIM continues to menace the region years later is the complete fulfillment of this prediction.

Both AQIM and LIFG are listed by the US State Department as foreign terrorist organizations (FTOs) but were in fact leading the fight against the Libyan government in 2011 with NATO weapons and air support. It would be France itself that would drop weapons into the country illegally to bolster their fighting capabilities during the conflict, and clearly, after the conflict both inside Libya’s borders and beyond them.

In 2011, the Guardian would report in its article, “Nato reviews Libya campaign after France admits arming rebels,” that:

Nato is reviewing the conduct of its military campaign in Libya after France admitted arming rebel fighters in apparent defiance of the UN mandate.

Besides the propaganda value of the September execution by AQIM terrorists now operating under the ISIS banner, the atrocity illustrates perfectly that ISIS itself is not a “new” threat, but rather a very old and familiar threat simply repackaged and marketed anew.

ISIS is clearly a conglomeration of existing terrorist organizations apparently from as far as North Africa to the Caucasus Mountains of southern Russia and everything in between. In addition to AQIM, Al Nusra and many other extremist factions either allied with or fighting alongside what the US calls the Syrian opposition, are also affiliated with and fighting in support of ISIS. This is basically what Al Qaeda was, before what can only be described as a marketing gimmick “ISIS” was coined.

Almost daily reports surface of ISIS obtaining weapon systems first handed over by the US and its allies to this “Syrian opposition.” The most recent were anti-tank missiles supplied to this opposition by the United States. The International Business Times would claim in its article, “Syria: Al-Nusra Jihadists ‘Capture US TOW Anti-Tank Missiles’ from Moderate Rebels,” that:

Weaponry supplied by the US to moderate Syrian rebels was feared to have fallen into the hands of jihadist militants affiliated to al-Qaida after clashes between rival groups.

Washington relied on SFR and Harakat Hazm to counter Isis (Islamic State) militants on the ground in Syria, complementing its air strikes.

This, however, is completely false. It was only in September that the Daily Beast would report in its article, “Al Qaeda Plotters in Syria ‘Went Dark,’ U.S. Spies Say,” that rebels armed by the United States, and in particular with the above mentioned anti-tank missiles, condemned US airstrikes on ISIS and Al Nusra. The Daily Beast would claim:

One Syrian rebel group supported in the past by the United States condemned the air strikes on Tuesday. Harakat Hazm, a rebel group that received a shipment of U.S. anti-tank weapons in the spring, called the airstrikes “an attack on national sovereignty” and charged that foreign led attacks only strengthen the Assad regime.The statement comes from a document, purportedly from the group, that has circulated online and was posted in English translation from a Twitter account called Syria Conflict Monitor. Several Syria experts, including the Brookings Doha Center’s Charles Lister, believe the document to be authentic.

Before the official statement, there were signs that Harakat Hazm was making alliances in Syria that could conflict with its role as a U.S. partner. In early Septemeber a Harakat Hazm official told a reporter for the L.A. Times: “Inside Syria, we became labeled as secularists and feared Nusra Front was going to battle us…But Nusra doesn’t fight us, we actually fight alongside them. We like Nusra.”

Another falsehood emerging is why the weapons were handed over to this group in the first place. Originally, the missiles were given to the rebels to fight the Syrian government not ISIS terrorists, as mentioned by NPR in April of 2014.

Groups the US was arming fought alongside, if not directly under, the banner of Al Qaeda. Claims now that Harakat Hazm “surrendered” to US State Department-listed FTO Al Nusra are clearly lies.

It is only a matter of time before the claim “the rebels surrendered to Al Nusra” becomes “Al Nusra surrendered to ISIS.” The question will then be, how will the US manipulate the narrative once all that is left is Al Nusra, and it still refuses to effectively neutralize the organization and sanction its sponsors abroad.

Ulson Gunnar, a New York-based geopolitical analyst and writer, especially for the online magazine“New Eastern Outlook”, where this first appeared.