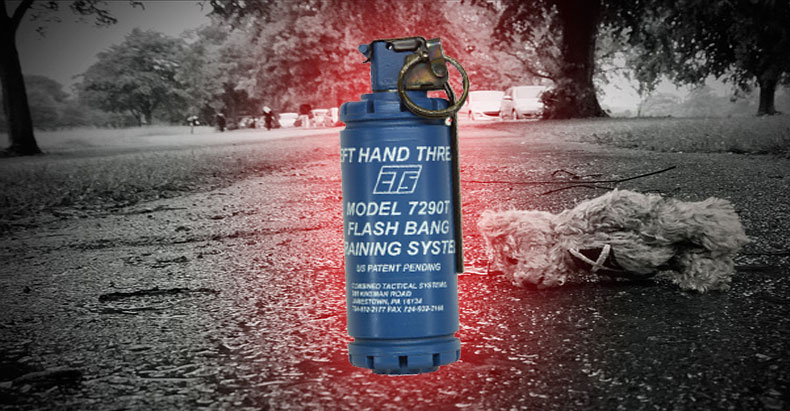 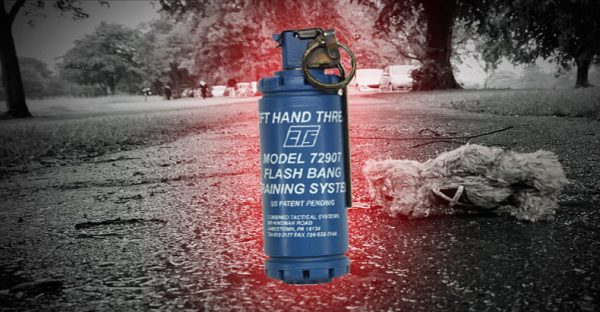 Deja Vu all over again.

That’s how I felt when coming upon the story of a 2-year-old boy that was injured by a “flash bang” grenade in California. Surprisingly enough this incident happened prior to the Bou Bou Phonesavanh incident which gained national press. For those who do not remember, back in May we reported an incident of a “no-knock raid” gone bad. An innocent child, known as “Bou Bou,” was injured in the raid, allegedly due to police carelessness:

Thometheva was not at the home at the time of the raid but was later arrested at another house on a felony drug charge of distribution of meth.

Officers had no indication that any children were inside the Lakeview Heights home when they returned around 3 a.m. Wednesday, Terrell said, and approached the same door where drugs had been purchased.

That door, which leads into a former garage that has been remodeled into a bedroom, was locked, so officers opened it, the Sheriff said. Then, a distraction device, or flash bang, was tossed inside.

“It distracts them so you can make entrance,” Terrell said.

But this time, the device landed in the playpen where a toddler was sleeping. Little Bounkham “Bou Bou” Phonesavanhs and his family, including parents and three older sisters, were all asleep in the room while visiting from Wisconsin. Only the little boy was injured.

The little boy went through multiple surgeries but did make a seemingly full recovery.

Not surprisingly, however, it has since been reported that Habersham County officials refused to help with the medical bills.

Now we have learned that, roughly a month before this incident happened, an eerily similar incident had already happened in California. Bou Bou was not the first.

A 2-year-old boy was burned and hospitalized after police threw an explosive device directly into his room during a “no-knock” raid on the wrong home, despite being told by the parents that there was an infant in the room, according to a lawsuit.

Jose and Paulina Salinas are suing the City of Oxnard and its police department, seeking damages for assault, battery, trespass, false imprisonment and infliction of emotional distress.

According to Courthouse News, in their lawsuit, the Salinas family says they were sleeping on April 16, around 4 a.m., when they were awakened by scuffling footsteps and vehicles outside their condominium.

As police approached one of the bedrooms, Paulina Salinas and her two older children told officers there was a 2-year-old in the room. Police ignored them, told them to cover their ears, and threw a smoke bomb into the room as 2-year-old Justin Salinas stood near the door.

When the smoke bomb detonated, shrapnel from the blast hit Justin in the foot, causing first-degree burns and glass cuts.

The 2-year-old was brought the the hospital and treated for his injuries.

This incident was confirmed by a press release from the Oxnard Police Department released shortly after the incident in April.

Read the full article at The Free Thought Project…

One time is a coincidence.

Twice is a pattern.

No-knock raids are not pretty and arguably unconstitutional.

Though the majority of law enforcement officials may attempt to do the right things for the right reasons, while operating within the law, there are cases like this that need to be highlighted. This needs to be exposed and widely circulated.

How would you feel if that was your two-year-old?

Not only did they get the wrong house, they had to injure a young child while they were there.

I would certainly hope so. I don’t think any cop starts their day hoping to find a helpless kid to “justifiably” injure.

But the fact that this has happened multiple times begs for the entire process of no-knock raids to be reviewed, evaluated, and thrown in the giant heap of other bad ideas that eventually had to hit the scrap pile.

Not only are the raids arguably unconstitutional, small kids are paying the price of this lawlessness.

You and I might have  vastly different opinions on the legality of such raids, but neither of us can deny the unfortunate results that are being seen.

Innocent children being sent to hospitals by careless cops is not acceptable by anyone’s standards.