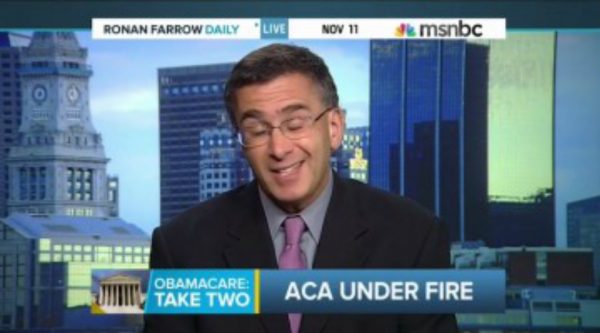 Jonathan Gruber is an MIT economics professor who was the architect of Romneycare in Massachusetts and a key architect of Obamacare, aka the 2010 Patient Protection and Affordable Care Act.

But both Gruber and the Obama administration kept his work on Obamacare a secret, and instead portrayed him as merely an independent economist who supports Obamacare. Gruber was frequently quoted by journalists and lawmakers who did not know of his connection to the administration; nor did Gruber disclose his connection when writing opinion articles. To this day, Obama denies Gruber’s role in formulating Obamacare or even that he knows the economist at all. (See “Obama lies again: Jon Gruber never worked for me“)

Thanks to Rich Weinstein, a Philadelphia investment adviser, Gruber has now been exposed, not only for his role in crafting Obamacare, but more importantly for his arrogant and contemptuous declarations — captured on video — that Obamacare INTENTIONALLY was written in a tortured and confusing way so as to conceal the law’s true costs from the American people who are too stupid to understand the law anyway, a stupidity “that was really, really critical to get this thing to pass.”

But it turns out $400,000 is a gross understatement of Jon Gruber’s earnings from Obamacare. After the bill became law, he made a good deal more — 463% more.

Byron York reports for Washington Examiner, Nov. 16, 2014, that when Obamacare became law, many states had to set up online “exchanges” by which individuals and small businesses can compare policies and purchase the now-mandatory health insurance (with a government subsidy if eligible).

Those exchanges would have to be built from the ground up. Studies would have to be done. And Gruber — who had designed Obamacare to begin with — was just the man to do the job. The Charleston Daily Mail in September 2012 even called Gruber “a policy rock star.”

Below are Jonathan Gruber’s earnings for his work as a consultant on Obamacare, both before and after it became law:

1. In 2009, as Obamacare was moving its way through Senate committees, Gruber was a paid consultant to the Department of Health and Human Services (HHS) on two contracts — one in March for $95,000 to work on the project; and the second in June for $297,600 to continue that work. Altogether, Gruber received a total of $392,600 from HHS.

2. In 2010, the state of Wisconsin, under Democratic Gov. Jim Doyle, paid Gruber $400,000 to do a study of the impact of healthcare reform.By the time Gruber finished his report, however, Republican Scott Walker had been elected governor and wasn’t much interested in using Gruber’s study.

4. In November 2011, the state of Vermont hired a consulting firm that paid Gruber at least $91,875 to study the state exchange.

6. In 2012, the state of Michigan included Gruber in a multi-firm,$481,050 contract to study its exchange system. It’s not clear how much of that went to Gruber himself.

Altogether, Jon Gruber was paid $1,816,025 from federal and state governments. If we exclude item #6 above, at a minimum, Gruber still made a whopping $1,334,975 for his “consultant” work on Obamacare — a bill that he intentionally designed to be confusing so that those stupid American people wouldn’t know what’s in it, which would enable those stupid Congress critters to pass the bill, many if not all of whom didn’t even bother to read the bill before they passed it into law. And then after the bill became law, Gruber then made even more money — 4.63 times more than what he was paid for crafting Obamacare — for his “consultancy” to state governments on how to make the deliberately-confusing law work.

In the end, it was the American taxpayers who paid Jonathan Gruber nearly $2 million dollars — those same “stupid American people” who are too stupid to understand Gruber’s deliberately-confusing “health care” law.

This is what Obamacare is about, from the beginning. Don’t say we hadn’t warned you.