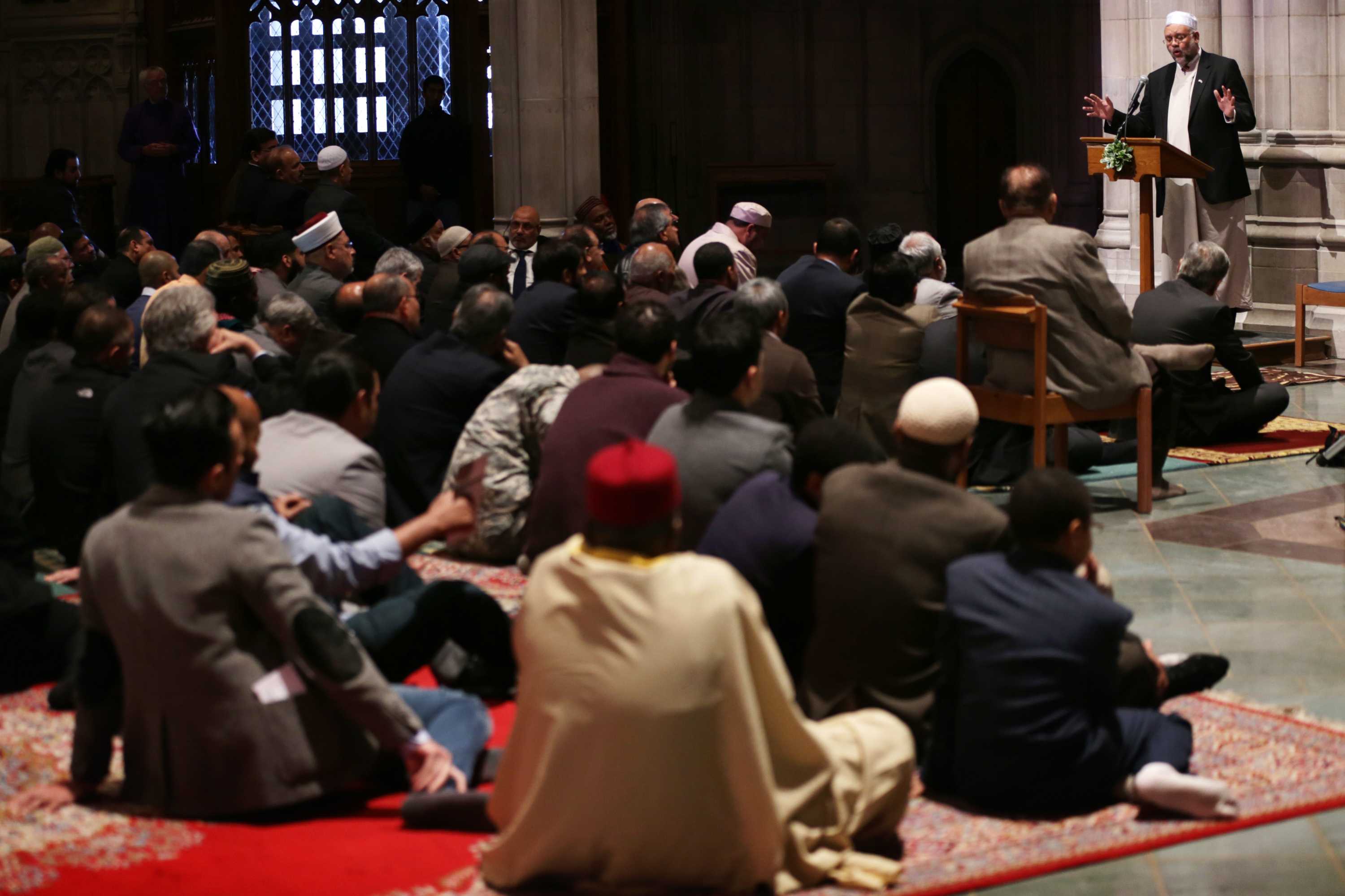 Friends, I confess that it is insulting to host Muslims in the National Cathedral in the first place, unless they simply want to hear the gospel message. However, to allow them to pray, remove Christians who speak the truth and then conduct the jummah (Muslim call to prayer) in a Christian Church is not just asinine, it’s a sure sign of apostasy. To go further, Imam Ebrahim Rasool, who is South Africa’s ambassador to the U.S., read a passage from the Qur’an, that Dr. Andrew Bostom claims are stinging rebukes of Christianity and Judaism.

Bostom, author of “The Legacy of Jihad: Islamic Holy War and the Fate of Non-Muslims” and “The Legacy of Islamic Antisemitism: From Sacred Texts to Solemn History, pointed out at his blog that a colleague, Diana West, “noted an opening summary overview of this commentary’s gloss on Koran 3:26 (and 3:27)—invoked, prominently by Ambassador Rasool during his main khutbah (sermon)—which I had overlooked. ”

“The emphasis in this omitted section of the gloss is of profound importance to what transpired at The National Cathedral Muslim prayer service, Friday, November 14, 2014,” Dr. Bostom wrote.

Bostom basically said that Rasool was engaging in the time honored Islamic tradition of taqiyyah. He wrote:

Consider the main khutbah (or sermon) delivered by Muslim South African Ambassador to the U.S. (and champion of the jihadist Muslim Brotherhood), Ebrahim Rasool.

Extolling his National Cathedral Christian hosts, the good ambassador Rasool quoted (video here; hat tip Ken Sikorski)—in deliberately truncated fashion—only the latter portion of Koran 5:82 (equivalent to this: “…and you will find the nearest in love to the believers (Muslims) those who say: ‘We are Christians.’ That is because amongst them are priests and monks, and they are not proud.”) What Mr. Rasool omitted is the virulently Jew- and “pagan”-hating, opening half of verse 5:82: “Verily, you will find the strongest among men in enmity to the believers (Muslims) the Jews and those who are Al-Mushrikun (i.e., “idolatrous” Hindus, Buddhists, and Animists).”

The Jew-hating nature of this verse—well-established by classical Koranic commentaries, spanning over a millennium—was re-affirmed by Sunni Islam’s most prestigious center of religious education, Al-Azhar University, and its current leading cleric, Grand Imam, Ahmed al-Tayeb. During an interview with Al-Tayeb, which aired on Channel 1, Egyptian TV, October 25, 2013, Al-Azhar’s Grand Imam gave a brief explanation of the ongoing relevance of verse 5:82which has been invoked—”successfully“—to inspire Muslim hatred of Jews since the advent of Islam:

A verse in the Koran explains the Muslims’ relations with the Jews…This is an historical perspective, which has not changed to this day. See how we suffer today from global Zionism and Judaism…Since the inception of Islam 1,400 years ago, we have been suffering from Jewish and Zionist interference in Muslim affairs. This is a cause of great distress for the Muslims. The Koran said it and history has proven it: “You shall find the strongest among men in enmity to the believers to be the Jews…”

Not long afterward, and clearly unnoticed by his witless hosts, Rasool invoked (video here) the Koran’s vitriole towards Christian societies (and indeed all non-Muslim civilizations who refuse to submit to a Sharia [Islamic Law]-based Muslim order), quoting Koran 3:26 (Say (O Muhammad SAW): ‘O Allah! Possessor of the kingdom, You give the kingdom to whom You will, and You take the kingdom from whom You will, and You endue with honour whom You will, and You humiliate whom You will. In Your Hand is the good. Verily, You are Able to do all things.'”) Authoritative classical and modern glosses on this anodyne-sounding verse reveal its inherent threat of violent jihad conquest by Muslims—past Byzantine (and Zoroastrian Persian) historical experiences as prologue. Two classical Koranic commentaries, and a renowned modern gloss, underscore the consistency of this mainstream, authoritative interpretation of Koran 3:26, spanning 600-years, till now.

“In these verses, Muslims have been taught and prompted to make a particular prayer which, in a subtle way, gives an indication that they are going to overpower the disbelievers,” wrote Bostom. “This has its proof in the background in which these verses were revealed. When the Holy Prophet [Muhammad] promised that Byzantium and Persia will be taken, the hypocrites and Jews laughed at the idea. Thereupon, this verse [ ]was revealed.”

Bostom also took the opportunity on Thursday, the day that a Muslim imam (who also led prayers at the National Cathedral) praised Allah on the floor of the US House of Representatives before Speaker John Boehner, to note “the willful obliviousness to a grim centennial remembrance: November 11, 1914, when the Ottoman Sheikh ul-Islam (supreme Muslim religious authority) issued fatwas (religious edicts) declaring a jihad against non-Muslim state enemies of the last Muslim ‘Caliphate’.”

When Breitbart News asked Dean of the National Cathedral Gary Hall whether it was appropriate to host Muslim prayers on the 100th anniversary of the last Caliph’s call for Jihad against nonbelievers, which resulted in the slaughter of innocent Christians, Hall answered, “I did not know that it was that anniversary. But knowing it now, it actually seems to be more appropriate to have an event that is on an anniversary of a hard time… There have been atrocities on both sides. There have been extremists on both sides.”

Hall went on to say, “The second thing, is that, the Christian church… a few centuries before was doing similar kinds of things in the holy land with the Crusader states and the Crusades themselves. Almost every religious tradition is guilty at some point of fostering violence in the name of that religious tradition.”

Breitbart pressed Hall further, asking him if he was aware that all of the Islamic organizers of the prayer service were either associated or members of the Muslim Brotherhood. “No, I’m not aware of that. We’re a faith community… This essentially was the time to come together and pray. I have not heard those allegations. I don’t think that they are germane to an event that is just essentially a prayer event.”

He then went on to state that he was no more alarmed of the Muslim Brotherhood’s ties than he would be “people in my own faith and tradition have links to other kinds of… inappropriate or unethical or immoral kinds of behavior.”

May I speak plainly? Mr. Hall is a man with his head in the sand. He is merely demonstrating his idiocy with such statements. If one wishes to compare the history of Islam with the history of Christianity, then please do so, but do it fairly. Compare their founders. Compare their writings and teachings and you will see that they cannot be equated in any way. They can only be contrasted.

Islam promotes itself as the religion of peace, though it is not. It speaks as though it is a harmless little lamb, but in reality it is a dragon. Sadly, many people, including self-professed Christians and even Jews, believe that Islam is harmless and that we are not at war with its ideology… but we are.

At least there was one self-conscious Christian who took a stand against the doctrines of Islamic anti-Christ on Friday and now God is giving her a platform to proclaim the truth.

The actions at the National Cathedral and the oblivious nature of Gary Hall, as well as other self-professed Christians reminds me of the Scriptures that read:

For when they shall say, Peace and safety; then sudden destruction cometh upon them, as travail upon a woman with child; and they shall not escape.

Though, the context is of the final Day of the Lord, nevertheless it speaks of judgment. Today, many are crying out that we have peace and even peace with Islam, but we don’t. In fact, it is questionable whether or not America has peace with God. I have said openly that I believe America is under judgment, but we have not seen a final judgment upon our land just yet. There is still time for repentance and time to throw the lawless ones out of our country and restore justice in our land. The only question is, will you be one of those whom God uses to do just that?